From Times of India,

CHENNAI: The conch and the Sudarshana Chakra are unmistakable. Although the figures do not match popular images of Kirshna sporting a peacock feather, archaeologists are convinced that the coins are of Krishna, revered as an avatar of Vishnu.

"These square coins, dating back to 180- BC, with Krishna on one side and Balram on the other, were unearthed recently in Al Khanoun in Afghanistan and are the earliest proof that Krishna was venerated as a god, and that the worship had spread beyond the Mathura region," says T K V Rajan, archaeologist and founder-director, Indian Science Monitor, who is holding a five-day exhibition, In search of Lord Krishna,' in the city from Saturday. 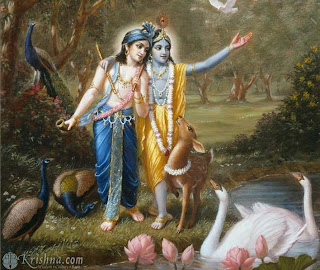 Having done extensive research in Brindavan, Rajan is convinced that a lot of the spiritual history of ancient India lies buried. "Close to 10,000 Greeks, who came in the wake of Alexander the Great, were Krishna's devotees. There is an inscription by Heliodorus, the Greek ambassador at Takshila , which reads Deva, deva, Vasudeva. Krishna is my god and I have installed this Garuda Pillar at Bes Nagar (now in Bihar),'" says Rajan.

According to him the Archaeological Survey of India (ASI) has unearthed many sites that throw fresh light on the era of Krishna. "ASI is expected to release the full findings next year. Many of the unearthed artifact have a close resemblance to materials of what is believed to be the Harappan civilisation. The findings may show that Krishna's life was the dividing line between India's spiritual history and the society's gradual shift towards a materialistic one," says Rajan.

Interestingly, a lot of what has been uncovered closely resemble the narration in the texts of Mahabharatha and the Bhagavatham," he adds. Both the spiritual works are revered by the Hindus as their holy books.

It has been over five years since the discoveries were made at Tholavira near Dwaraka, close to Kutch. Much progress has been made due to the application of thermoluminous study (TL) in ascertaining the age of artifact. "It is possible to get the diffusion of atomic particles in the clay pottery unearthed and arrive at an accurate date," points out Rajan. Tholavira itself is believed to be the capital city as detailed in the opening chapters of Bhagavatham. Rajan points to an image of a plough, made of wood, which is mentioned in the Bhagavatham.

The findings could lay a trail to understanding Krishna's life (said to be 5,000 years ago) and times, as a historical fact, says Rajan. The exhibition will be open till December 31 at Sri Parvathy Gallery, Eldams Road.

The submergence into the sea of the city of , vividly picturised in the great epic of Mahabaratha, is indeed true! A chance discovery made by a team of scientists, in the region, establishes that the Mahabaratha story is not a myth. The rich city with fertile landscape and great rivers had indeed submerged into the seas several thousand years ago. 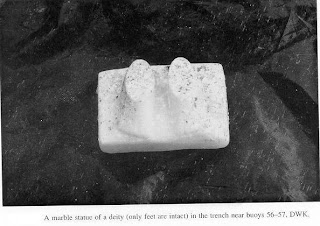 But before we get to the present, a bit of history is quite in order.

There is a vivid description in the Mausalaparvan of the Mahabaratha about the submergence of Dwaraka. The people of Dwaraka including Arjuna seemed to have witnessed strange things before its submergence in the sea. 'The event was preceded by the unabated rumbling noise of the earth throughout the day and night, birds screamed continuously, and heavy winds swept the land. The sea, which has been beating against the shores, suddenly broke the boundary that was imposed on it by nature. Huge tide with great height surrounded Dwaraka. The sea rushed into the city submerging beautiful buildings. The sea covered up everything and in a matter of few moments, there was no trace of the beautiful city.' It was something of an ancient tsunami.

And now the scientists at NIOT (National Institute of Ocean Technology, of the Department of Ocean Development) have established this. While working for British gas in the region, a few years ago, the scientists of the NIOT, were stunned to see images of objects and things, completely alien to the marine domain. Immediately a team swung into action and samples were collected and sent for analysis and dating (it is usually done to scientifically establish the antiquity of the excavated objects).

Samples collected include artefacts, wood pieces, pottery materials, hearth pieces, animal bones. They ere sent to , University, , Institute of Earth Sciences, for analysis and dating. The results were astonishing. It was found beyond doubt that the samples belonged to a period varying from 7800 to 3000 years (BP) Before Present !


The even more flooring discovery happened soon. NIOT, which carried outside scan and sub-bottom surveys in the year 2002-03, established beyond doubt the presence of two large palaeochannels (river channels which existed once and later submerged under the sea) in the . Alluvium samples were collected from different locations in the areas of the palaeochannels by the gravity core and grab method.

Badrinarayanan, Marine Archaeologist and formerly coordinator for the project, says 'the most astonishing thing was that all of the crew-members, including the ship master who was a catholic, had dreams full of strange visions, on the night of discovery. We felt we had stumbled upon something great and unusual.'

The study of the samples under microscope revealed the occurrence of fragile and highly sensitive Ostracods (tiny marine and fresh water crustaceans with a shrimp-like body enclosed in a bivalve shell) overlain by regular marine fauna.

These results strongly indicated that the freshwater deposition which took place in this area was very much a part of the onshore land region and later submerged to the depths varying from 20 to 40 meters. The alluvium (fresh water sand) samples sent to the Earth Science Department, Manipur University for OSL (optically stimulated luminescence) dating gave the OSL determinant of 3000 years (BP) Before Present !

Prof. Gartia (The Journal of Indian Ocean Archaeology, No.2 of 2005, Pg.144) after conducting extensive investigations concluded that region had experienced at least three large killer earthquakes about 1500, 3000 and 5000 years BP respectively. Geomorphological evidences also show beyond doubt that the North-Western part of the Indian landmass was seismically active during the last 10,000 years. These killer quakes are likely to have caused the shifting of the rivers and sea level fluctuation including the sinking of the legendary city of , capital of the Lord-King Krishna. The discovery about the availability of fresh water from the now submerged major rivers along with other marine-archaeological evidences, corroborates the Mahabaratha reference that Dwaraka, the ancient city of , lies under the great ocean !

Great article madam, I have been longing to see such truths come out..

Hi
Be proud of India. Please watch these and share with your friends. Spread the greatness of India.

Mr HarryKris,
Thanks for the links.