LOS ANGELES, CA - A copious quantity of scholarly information was exchanged and shared between researchers, scholars and several interested members of the public, on the intriguing debates which loom over the origins, locations and the cultures of the ancient Indian Civilization which existed in the Sindhu-Sarasvati Valley, at an International Conference conducted at the Loyola Marymount University over two days on February 21 and 22. 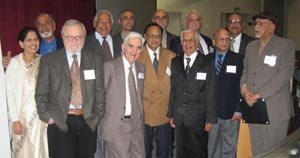 The conference underway with an introduction by Christopher Chapple, Conference Co-Director and Doshi Professor, LMU in which he expressed it was most appropriate the event was being conducted in LMU , a historical and archeological site which had been the home of the original settlers, the Tongva tribe. The beauty of archeology he added was that " we learn about those who went before and we learn a little about ourselves. He thanked Nalini Rao, Conference Director and Prof of Art History , Soka University for collecting the best group of people to speak at the event. He was pleased that her father , the reputable Indian archeologist, Dr. S.R.Rao was present to share his experiences and interpretations of the various discoveries during his several decades of excavation in Lothal. He expressed his deep gratitude for the continued support of Navin and Pratima Doshi in activities relating to India and to the speakers who had gathered, for their commitment and for sharing their knowledge.

Conference Director Nalini Rao set the tone for the conference with an explanation on the title of the event. She said there was sufficient evidence of the existence of the Sarasvati which dried up around 1500 BC , on the banks of which was the cradle of Indian Vedic civilization and its links with the Harappan society which flourished on the Sindhu or Indus River. The aim of the meetings she added was a reappraisal of the place of the Sindhu and its vedic culture and to reexamine the shared identity between the Sindhu and Sarasvati communities in the light of interdisciplinary studies like theological, linguistic , anthropological literary, mythological, religious and historical. Yet she said there are ambiguities in the chronological, geographical, cultural features which need to be examined and she hoped the scholars assembled would be able to objectively discuss the subject and arrive at some sort of consensus on the people of the Sindhu Sarasvati Valley.

Navin Doshi in his remarks added that the conference was meant to get to learn more of our ancestors and our roots in India and hoped presentation would be made without any bias. In closing he said that after the presentations "there will not remain any doubt into an undisputed coherent truth of our ancestors who had settled on the banks of the Sindhu and Sarawati Rivers" - the very same who are the children of the tribes of Homo-Sapiens originating from Ethiopia. Speaking to India Journal Doshi stated that he had not been happy with the Indus conference he had organized a few years ago. At that meeting he stated that there was far too much discord and conflict and the competence of some of the presenters was questionable. So it had been his wish to conduct another one and was excited it had materialized thanks to the efforts of the remaining members of the advisory committee, namely Nalini Rao, Damodar Sardesai, Christopher Chapple and Debashish Banerji.

The first papers presented were on the "Intellectual History of the Debate" by Edwin Bryant followed by the " Harappan Diaspora and South Asian Archeology by Jim Shaffer. At the conclusion of this session the Chair and Professor Emeritus of History at UCLA making references to the presentations remarked that politicizing of the debate over the origins of the ancient Indian civilizations was inevitable. He pointed out that the British reveled in the principle of creating a sense of inferiority by creating divisions and have all along tried to deny the identity of the Indian people which is perhaps their worst legacy. He said they feared that if the it could be established the Vedas and the Valley civilizations existed long before the Christian era , there would be a big question mark over the superiority of the British race. Showing his obvious dislike of the Raj he said a subject that had not come up at the conference till then was the genetic theory which has evolved tracing the migrational path of the human race through human genes , and sincerely hoped that his ancestory would not lead back to the British!

Several panels followed with question and answer sessions for the rest of the day and into half of the following day when the event came to an end with closing and appreciations by Nalini Rao and Debashish Banerji.

During a brief overview of the formation, history and activities of Taksha , its Chairman, Board of Trustees Adarsh Deepak awarded Navin Doshi and Rajinder Gandhi MD a memento and a Certificate of Induction in the Education Philanthropy Hall of Fame at the Institute in honor and recognition of their sustained support for constructive education and research in Indic traditions.

The conference also included a tour of the LMU Archaeology Center and the viewing of Indus artifacts in the collection.

The event was sponsored by the Doshi Bridgebuilder Endowment, Bellarmine College of Liberal Arts, the Departments of Theological Studies,Classics and Archeology - LMU, Soka University and the Southern California Consortium for International Studies.

India Journal is the leading Indo-American Newspaper in Southern California, having been printed weekly for the last 20 years, we are the oldest and most trusted name people turn to when they need up to date information on the Indo-American community.