Today moon is crossing Rohini in the sky
The star Rohini is special in the sky and in Jyothisha too.
Rohini is the only star which will be often occulted by Moon and planets in the sky. It is because it lies close to the ecliptic.
This has given rise to the story of Chandra being more fond of Rohini among his 27 wives (the 27 wives symbolize the 27 stars of the zodiac.)
Among other stars Revathy also lies close to the ecliptic.

Rohini, known as Aldebaran is something special.
It can not be missed in the autumn sky where the trapezium shaped Orion is a feast to the eyes.
Rohini lies close to Orion but it is part of the constellation Taurus, the Bull.
The V- shape of the bull’s face can not be missed, with a bright and orange tinted Rohini in one of the arms of the V -shaped formation of stars. 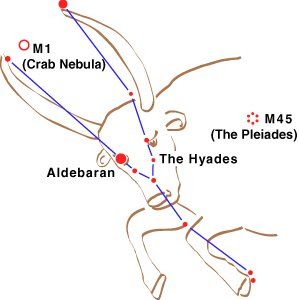 On the other arm, that is, on the other side of Rohini, a two star formation must be noted to confirm that you are indeed looking at the bull’s face.


The other important star in this part of the sky is the Krittika (Pleiades), a hazy cluster of stars which in fact is a galaxy by itself.


From Puranic lore and Sangam texts (Paripaadal) we can establish that this galaxy of Kritthika had come closer to our galaxy in the past, causing some disturbance in our system. The result was the loss of 6 companion stars of the Saptha rishi Mandala (Ursa Major) while the 7th one, namely Arundhathi alone managed to remain ‘with us’ – I mean with the star ‘vasishta’ of the saptha rishis.


Restoration of the equilibrium of our system of stars from this melee is connected with Lord Kaarthikeya! 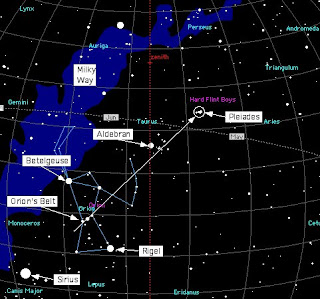 Yet another important star close to Rohini is Arudra, known as Betelgeuse.
This can be easily identified as the bright red star at one of the corners of the Orion.
This is one of the oldest stars in the final ‘days’ of its life. It is a very important one from astrological point of view. The only other oldest star in the 27 star system is ‘Jyeshta’ (Antares) or ‘Kettai’.


It is interesting to note that the two oldest stars namely Arudra and Jyeshta lie opposite to each other in the sky.


Another interesting information is that while Jyeshta is close to the galactic centre (near Sagittarius or Dhanush), Arudra is seen beyond the outer edges of our galaxy.


A deeper study must be done in astrology and puranas to find out whether any greater relevance had been there to Arudra.
For, Arudra is the lorded by Rudra or the Destroyer God.
It was of importance to olden Tamil people.

The Pandyas of the submerged southern lands had Rudra as their Progenitor.
They followed this star as their God.
Arudra is known as “Adhirai” in olden Tamil texts.
This word “Adhirai” is derived from Adi + Irai.
This means ‘God of the Beginnings’.
Adhirai became Thiruvadhirai in Tamil lexicon.

I guess that the present galaxy of ours has something to do with this star in its formation. I am looking for supportive evidence from texts and will share them once I get a better idea about this.


For this post, I am going to concentrate on Rohini only.

Though this star looks as a part of the constellation of Taurus, it is indeed not a part of it.
It is moving in a southerly direction and in 50,000 years from now, the bull’s face would have become distorted and Rohini may have moved away from its present place.


The direction as I mentioned here is about planes.
There are only two planes once we go outside our earth – above us and below us.
The plane above our system of existance is North or uttar and the plane below is South or dakshin. Rohini is seen moving towards the dakshin part of the sky.


Rohini has been accorded a high place in Mururtha astrology.
It is a Dhruva star or a fixed star.
This means any auspicious action done on the day of moon in Rohini will last long. It must be recalled that marriages in Tamil lands were timed on Rohini days only.

Both Arudra and Rohini were closely watched by our ancient seers who formulated a pattern for prediction of rainfall based on them. 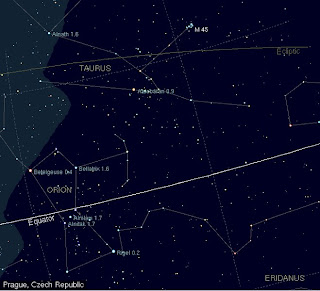 Even today the yearly predictions for rainfall given in Panchangas are based on Arudra.
The time, the sun enters Arudra is indicative of the yearly rainfall. The details of this prediction are exhaustive that I am not elaborating on them.

But the issue is different with Rohini.

Moon’s movement in the constellation of Rohini has to be observed every month.

Here we must understand what is considered as a star in Jyothisha.


Each of this 13-20 degrees is further divided into 4 equal parts called ‘pada’ .
Each ‘pada’ also is found to exhibit some finer characteristics.
These divisions are identified with the constellations spread across them.
They are named by a specific star present in that distance.

When the moon moves in a particular distance we say that it is the day of that star.
When moon crosses the distance of Rohini we say that Rohini is the star of the day.

The sun, the moon and the planets move around these 27 parts of the sky.
Accordingly, a number of combinations occur which are interpreted in astrology.

In mundane astrology, the day of Rohini with moon crossing it will indicate rainfall prospects and the general prosperity of the country where it is viewed.
Usually, the moon crosses the sky near Rohini.


If the moon crosses or touches the Rohini from South and moves to the North after that, the result is mixed. There will be good rainfall but some natural disasters also can be expected.


If the moon crosses to North from South without touching Rohini, then that is a good sign.
There will be good rainfall and all round prosperity.


If the moon crosses the Rohini, parallel to it, that is a very bad indicator of troubles ahead. There will be famine and people would suffer.

If the moon crosses Rohini straight across it, thereby occulting it, there will be troubles to the ruler of that country. The ruler may even die.


If on the day of Rohini, the sky is overcast thereby hiding both Rohini and moon from sight, that is not a good sign. There will be diseases though there will be plenty of water available to the people.

At the outset these predictions may look absurd. But if we connect them to the movement of moon with reference to earth we will know how precariously we (earth) are moving in space with reference to other celestial objects. Particularly moon in closer vicinity wields an influence on all water bodies and thereby on cloud formation. Plant life and animal behavior are closely connected to moon’s influence and movement. Moon’s movement in the particular part of the sky identified with Rohini has a more direct bearing on rainfall and the resultant prosperity.


On the day of Rohini in the Krishna paksha of Ashada. our ancients had the tradition of conducting a homa to Rohini.


After the homa, they used to tie a soft white cloth on a flag post at a certain height. The cloth which acts like a flag will be observed continuously for the full duration of Rohini. The day of Rohini will be divided into 8 parts and the flutter of the white cloth will be observed on all 8 parts of the day.


The windiness or breeziness is observed by this.
A gentle breeze is a good indicator of rains in the ensuing Rainy season.
The 8 parts of the day correspond to each fortnight (paksha) starting from a month after, that is, from Krishna paksha of Shravana until sukla Kaarthiga.


Those parts of the day that experienced gentle breeze as observed from the cloth in the post, are indicative of good rainfall in the corresponding fortnights.

Like this our ancestors had methods of predicting rainfall by some simplistic ways.
In this modern times of scientific temper, these can be analyzed and utilized to further our knowledge of climate and rainfall.
This knowledge can even prepare us better to face the exigencies –
similar to how our ancients did by getting fore-warned about the seasons ahead.

Very interesting. In the sidelines of this, there is an article by Kanchi Paramachraya where he discusses how the sanskrit nakshatra names have become 'tamilized'. He refers the star's sanskrit name as Ardra, while you have referred it as Arudra.
The link is:
http://www.kamakoti.org/hindudharma/part6/chap13.htm

'Ardra is the asterism sacred to Siva. It is called " Adirai" in Tamil and with the prefixing of "Tiru" it becomes "Tiruvadirai".'

The Sanskrit name is Arudra

I read the article in the link.

The specialty of these two are that they are lorded by Gods themselves. Vishnu is the lord of Thiruvonam and Rudra is the Lord of Thiruvadhirai. This explains the prefix as 'Thiru'.

It sangam texts, Rudra or shiva is referred to as 'Adhiraiyaan'. The commentators (unknown and unnamed ones whose 'urai' has been recovered by Dr Vu-Ve.Sa along with the verses) have said that this refers to the 'Lord who is there from the beginnings'. Aadhi- irai. This became Adhirai in due course. Since Arudra is connected with Rudra, this star came to be called as Adhirai..