Ramavathara is considered to be a model avathara for human excellence.

A number of ‘the bests’ are attributed to Rama.

Monogamy is one among the ‘bests’ or the dharmas exhibited by Rama.

Rama is better known as ‘Eka patni vrathan’.
This is an adjective for Rama.

The expression is ‘Rama is eka patni vratha:’

He is eka patni aavruththa:

This means he is always with (committed to) one patni. 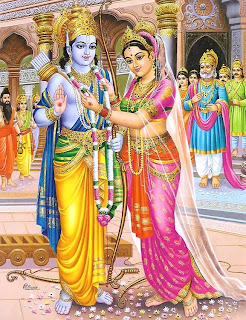 Eka means one and also refers to the first one.

It is because of this, there used to be controversies that Rama had other wives too.

Eka patni vratham is interpreted as commitment to the first wife!

The exponents of this claim used to point out Sita’s lamentation in Ashoka vana.

The exile period was nearing its end. She was abducted in the last year in exile.

She had already spent 10 months in Ashoka vana.

Only 2 more months were left for the return to Ayodhya.

But there was no sign of Rama coming to rescue her.

Having lost the hope that Rama could find her whereabouts,

After going back, he would be coronated and live happily with beautiful women!

This is seen by some as an indication that Rama had other wives too.

This controversy had always existed in the past and had been countered well.

The most popular argument is that why did Rama have the golden image of Sita beside him in doing the Ashwamedha homa, if he had other wives.

But then, sastras say that only the first wife has the right to take part in homas or in any activity where the wife’s presence is needed. The second wife has no role while the first wife is still alive.

As per Vaastu sastra, even if a person has many wives, only the first wife has the right in poojas done for or done at the house.

The dimensions of the house that is to be built also must take into account the ‘amgula- pramana’ of the husband or his first wife or the eldest son born of the first wife. Even if the other wives were to live in that house, no importance is given to them in any Vaastu related activities or in poojas.

Viewed from this perspective, it can be argued that even if Rama had other wives, he could not have had any of them with him in doing the yajna when Sita was still alive. That could have prompted him to make the image of Sita to accompany him in the yajna.

This controversy can be resolved only by taking recourse to Jyothisha!

Eka patni vratham is the highest attitude which one can not have unless one has done good deeds in the previous births.

The action and re-action cycle that is manifest as Karma cycle deals with the issues of the same category. That means, the attitude towards wife in one birth will have its reactionary karma manifest in the next birth only in the issues around wife. That means if one treats his wife well, he is bound to get a good wife or a happy matrimonial life in the next birth.

Another causative factor for this is worship of Narayana or Lakshmi or Gowri in a birth. This will also make one lead a happy married life with a good wife and children – provided one has not committed any offence with reference to wife in the previous birth. In addition the goodwill of parents that one gains in a birth will result in a happy married life with a single wife and virtuous kids.

These are manifest as planetary yogas in the horoscope.

I will write here about two such yogas which indicate loyalty to ‘eka patni’ in the previous birth and in the current birth.

These yogas are in Rama’s horoscope showing him as the eka patni vrathan.

He had not married nor even looked at any other woman.

This yoga also shows his inseparability from Mahalakshmi always!

One such yoga is ‘KaakaLa yoga’ which is formed when the lord of the sign in which the 7th lord is placed, exalts or is in own house which happens to be a trine or quadrant from Lagna. 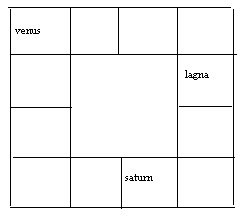 In Rama’s horoscope, the 7th lord is Saturn. It exalts in 4th. The lord of that sign is Venus. Venus exalts in 9th from lagna. This suffers no affliction indicating single wife and extreme loyalty to wife. The previous karma for this yoga is indicated by Brahma in ‘Brahma rishi Vaakhyam’ – as fidelity or Eka patni vratham. 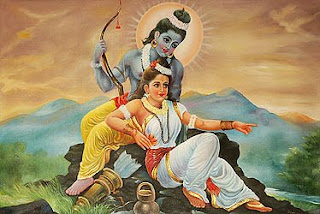 Another yoga for eka patni vratham is ‘Kaama yoga’.

This is formed when the 7th house receives benefic aspects while the 7th lord exalts in a sign other than 6,8 or 12.

In Rama’s horoscope, the 7th house receives the benefic aspects of exalted Jupiter and Moon in own house. The 7th lord Saturn exalts in 4th.

This is indicative of eka patni vratham and not thinking of any other woman at any time. 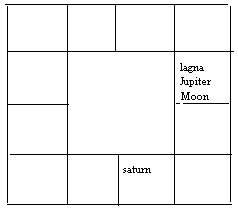 Though it is rare to come across horoscopes with these yogas, the import of this yoga is that one can practice this vratha at least in the current birth. This would give one a hassle-free after birth at least with reference to harmony and happiness in married life.

Monogamy is a dharma by itself in one’s journey to moksha or Final emancipation.

Moksha is attained after one crosses artha and kaama in a dharmic way.

The middle two are the testing grounds.

The first and the last are the links.

It is dharma that takes one to moksha.

But one must cross artha and kaama to reach moksha.

For this one must know what is the dharma in artha and kaama.

Artha is about the material life – the money and materials and the ways of attaining them.

Dharma must be adhered to in material acquisition.

Next is Kaama which is about personal life.

Dharma must be adhered to even in personal, sex life.

If not, one will be pulled back into the quagmire of unhappy re-births.

When a person adheres to dharma in material life and personal life,

Moksha is at a reachable distance.

That is why Sanatana dharma or Hindu dharma has laid clear cut rules for personal life too.

Monogamy is a virtue or a dharma of Kaama that helps one evolve better towards Final Emancipation!