Dr Abdul Kalam suggests a 5-point agenda for the MPs of the coming Lok Sabha.
Will they listen?


1) Increase the pre capita income of the constituency by 3 times in their 5-year term
2) Increase the literacy rate by 20% in 5 years
3) Work towards improving the water resources in the constituency.
4) Ensure value added employment to everyone in conformity with his or her qualification.
5) Bring down infant mortality to less than 10 per 1000 in the next 5 years. 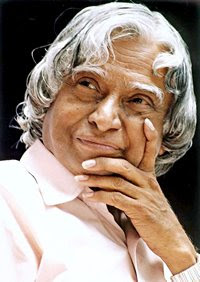 Kalam sets an agenda for MPs


Former President A. P. J. Abdul Kalam has set a five-point agenda for the new MPs of the 15th Lok Sabha, the elections for which will be held shortly.


He also appealed to the people to exercise their franchise, pointing out, “the right to vote is sacred and it’s an onerous responsibility that we owe to the motherland.” “Assess the present percapita income of your constituency with the aim of increasing it by three times in five years. Also, you must work towards raising the literacy rate in your constituency by at least 20 per cent during your five-yearterm,” Dr Kalam said, in a message to the future MPs through the India Vision Group that has now launched a campaign to ‘Celebrate Democracy: Vote India’.

The former President said the MPs in the next Lok Sabha should also “take statistics of the water-bodies in their constituencies and review the status of their desilting and interlinking through the five-year term.” He said the MPs should create programmes for providing value-added employment for every member in the constituency, “consistent with her or his qualification.” The fifth mission in the MPs’ agenda, Dr Kalam said, should be to bring down the infant mortality in the constituencies to less than 10 per thousand in five years. The present infant mortality rate is 50 per thousand.
Posted by jayasree at 11:41 AM