Rahul Gandhi is reported to have said,

"The LTTE (Liberation Tigers of Tamil Eelam) is a terrorist group. I am not particularly fond of LTTE myself. It killed my father."

These wonderful words of wisdom were spoken by Rahul Gandhi, even as he was making his mind known on Varun’s speech in Philibit that he (Rahul) does not carry hate and anger.

He means it, it seems. 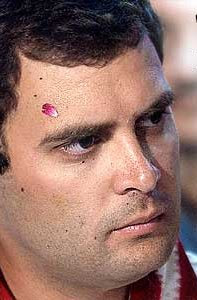 He has no anger or hatred against anyone, except the ones who killed his father.

Does he mean to say that if it was not for his father, he would not have lost his fondness for LTTE?

If it was someone else who was killed, he would not have lost his fondness for the terrorist organization that killed?

Even you and me and millions of fellow citizens were outraged at the killing of Rajiv Gandhi but we have no filial connection with him. We were angry then and angry now because we can not forget what the LTTE did. There is no personal connection with Rajiv Gandhi to make us think so. But we are angry because someone among us is harmed.

This is righteous anger – the anger that can generate better protective shield for any of us facing the chance of getting harmed –the anger that can keep off the prospective offender from attacking any one of us.

This anger is needed to show our collective assertiveness against any attack on any of us or on our principles or beliefs.

We get this anger every time we hear some outrage committed on some of us somewhere in –be it in Mumbai or in or in Philibit or even in the Sethu!

It is a pity that Rahul can not experience such an anger – the anger that Varun felt at the outrage committed on the existing ground realities at Philibit.

It seems Rahul can never feel or think from other’s shoes nor get shaken by assault of any form unless or until it is done to his near and dear ones.

But it angers us all the more to think that his and his party's near and dear parivar contains only the minority communities!

Nice blog. Only the willingness to debate and respect each other’s views keeps the spirit of democracy and freedom alive. Keep up the good work.