Hindu Thought recognizes 7 types of air-flows or air currents – 5 within the earth and 2 beyond the earth. The last two types are not exactly air currents in the true sense of the term, but are some forces or flows that regulate the way the celestial bodies of the universe move around.

Termed as Saptha- Vaayu, these are described in Mahabharatha and also by Aryabhatta and Bhaskara. The knowledge of them given briefly in this post is worthy to be investigated to understand Nature better.

The context of the discussion of the Saptha- vaayu is in the form of dialogue between Sage Vyaasa and his son Suka muni. This takes place in Shanthi parva, chapter 336 wherein Vyasa advises his son not to do Veda adhyayana as the wind was quite wild at that time. Recital of Vedas and learning of the same must take place when the wind is breezy and calm. It is because the wind (Vaayu) carries out different functions in different frequencies.

Such functions are 7 in number, 5 of which are carried out within the atmosphere of the earth. The last 2 are also known as Pitru-yaana or the path of the Moon and Devayaana or the path of the Sun. Pithru yaana guides the departed souls to abode of the pithrus so that they can be reborn. Deva yaana guides the departed souls to somewhere beyond, so that they never return to earthy plane for rebirth.

The Saptha-vaayu has a combined function in the daily life of a Vedik. The washed cloth is dried in saptha –vaayu! That is, if a person shakes the wet cloth for 7 times in the open air by invoking the saptha vaayu, it is said to be ready for wearing. The cloth may still be wet, but the contact of Saptha vaayu makes it fit for wearing.

This kind of idea reveals that the last 2 vaayu also are very much present within the earthy boundaries.

Such an idea is found in Sundhara khanda of Valmiki Ramayana. It is said in the first chapter of this khanda, that Hanuman flew above and below the clouds and also beyond. It is also mentioned that he flew through the path of the sun and the moon when he crossed the Ocean to reach Lanka in search of Sita. The path of the sun and the moon are Parravahan (Devayana) and Parivahan (pitru yana). The former supports the entire universe while the latter guides the movement of galaxies.

Though this sounds absurd or non-plausible, Bhaskara explains this in a simple way. He asks us to imagine the moving potter's wheel. The universe is moving like the potter's wheel due to the power of Paraavahan. Imagine an ant sitting on the wheel and moving too. Like the ant, the heavenly bodies are moving in their course guided by Parivahan in the ever moving Universe (of Paraavahan). 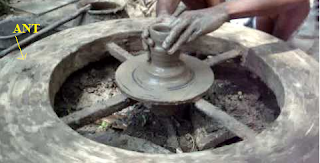 Along with them, the earth is also moving with 5 other Vaayus moving within itself – with the most important among them (Pravahan) moving inside our body as Prana! In such a system that is constantly moving, every type of Vaayu moves in some relation and equilibrium with the rest of the Vaayus that work as a single system called the Universe.

That means a birth or death (pravahan) does not happen haphazardly. There is always some connection, some correlation or some part of the Universe is 'aware' of it and readjusts accordingly!!

Why do galaxies spiral? - the wisdom from the frying pan!