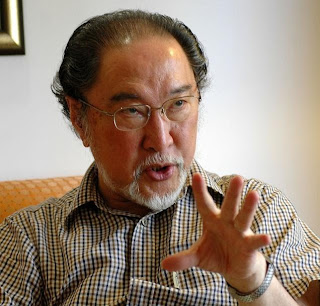 (Noboru Karashima is the President of the International Association of Tamil Research and Professor Emeritus, University of Tokyo.)

A new International Association of Tamil Research must now be created to function as a real academic body.

The World Classical Tamil Conference that was held in Coimbatore last month attracted lakhs of people, according to reports. The International Association of Tamil Research (IATR), which is an older academic organisation of international scholars and of which I am President, kept its independence from this Conference. I will explain here the reasons for this and also contemplate the future of the IATR and Tamil studies in general.

In September 2009, I was informed that the Tamil Nadu government had decided to hold the 9th session of the IATR conference in January 2010 in Coimbatore. I was greatly surprised as I had not been consulted on this matter. For accepting the government's kind offer to sponsor our 9th Conference, I put forth the following as conditions.

1) A period of at least one year to organise the conference, as I felt it was impossible to organise any big international academic conference within four months. The earliest possible date of the Conference, I said, could be December 2010 or January 2011.

2) The clear demarcation of the academic sessions of the IATR conference from the political events and programmes associated with it.

3) The release for distribution by the Government of the five-volume Proceedings of the 8th IATR Conference held in 1995 in Thanjavur sponsored by the then State Government. These had been ready for distribution in 2005, but had been kept in the Tamil University despite repeated requests for their release to the present Government.

In response, the State Government postponed the Conference from January 2010 to June 2010, and accepted my second and third points. I was strongly urged to accept this offer, as the Government could not put off the date later than June 2010 in view of the expected State Assembly election. I however held to the position that the conference should not be held earlier than December 2010. Incidentally, in the case of the 14th World Sanskrit Conference that was successfully held in Japan in September 2009, the first circular was issued two years before the conference.

Having consulted many internationally reputed scholars in various countries on this matter and having secured their support, I sent my final answer to the Government in the negative — with a statement, however, that the Government could hold any Tamil Conference of its own, if it did not involve IATR. Accordingly, the Government decided to hold its own conference, the World Classical Tamil Conference, in June 2010 in Coimbatore.

History of the IATR and past conferences

The IATR was established by some eminent scholars who were deeply concerned about the development of Tamil studies on the occasion of the 26th International Congress of Orientalists held in New Delhi in 1964. The first IATR Conference was held in Kuala Lumpur in 1966, and the second in 1968 in Madras. The 1960s witnessed the culmination and triumph of the Dravidian Movement, and the government headed by C.N. Annadurai of the DMK was voted to power in 1967 — just before the IATR conference in Madras.

It was quite natural that the Madras conference turned out to be a massive political celebration of the victory of the Dravidian Movement, though the conference showed its strength academically too. Therefore, the political statement made by this academic conference was understandable and probably permissible, although politics cast a shadow over the following conferences held in Tamil Nadu. The 5th Conference held again in Tamil Nadu in 1981 in Madurai, under the sponsorship of the AIADMK Government, became a political show again as the government made it a platform for the forthcoming elections. The 6th Conference, which was held in Kuala Lumpur in 1987, was equally affected by regional politics, as it was attended by a large group of Tamil Nadu politicians.

Although I was absent from the 7th Conference held in Moka in Mauritius in 1989, I was elected President of IATR on that occasion. I therefore organised the 8th Conference held in Thanjavur in 1995 with the sponsorship offered by the Tamil Nadu Government. Although I tried my best to separate the academic session from the political programme, two lakh persons attended the closing ceremony held in the stadium. Moreover, the conference was spoiled by the deportation of some Sri Lankan scholars. Though I sent a letter of protest to the then Chief Minister asking for an explanation, I did not receive a reply.

The Dravidian Movement, or the Non-Brahmin movement as it was called, arose in the 1910s spearheaded by the Justice Party. Language became the focus of the movement by the late 1930s, and great emphasis was placed on the economic and political struggle by the South (Dravidian) power against the North (Aryan) power. The movement demanded the overturning of the North/Aryan 'oppression' of the South/Dravidian.

From the 1970s, however, the situation changed in accordance with the changes in caste society and the gradual economic growth of the South. The Dravidian Movement could be said to have fulfilled its historical role to a certain extent. From the 1980s, we see a shift in the aims of the movement. The political mobilisations by the DMK and AIADMK, and their appeals to the regional sentiments of the Tamil people, were primarily aimed at the expansion of their political vote base.

The Proceedings volumes of the 8th IATR Conference held in Thanjavur in 1995 still remain in Tamil University without distribution. The World Classical Tamil Conference was the best opportunity for their distribution. In the Preface (of the Proceedings), I have suggested that IATR should change its structure, free its conferences from politics, and respond to new academic trends.

It is true that IATR had not been able to conduct the 9th Conference since 1995. However, it is important to note that IATR originally planned to hold the 8th Conference in London in 1992, but as that did not materialise, it recommended in Thanjavur in 1995 the U.K., U.S.A. or South Africa as the venue for the 9th Conference. However, none of the IATR national units of these countries came forward to invite IATR to hold the conference; they were daunted perhaps by the inevitable political overtones that enter the conferences.

As for new trends in research, the "Tamil Studies Conference" organised by the University of Toronto has held its fifth conference, although on a much smaller scale, in May 2010. Some workshops and seminars on specific areas have been held in various places in the last ten years. I do not deny the advantages of large conferences, provided they are free from politics. However, the time has come now for small-scale workshops and seminars for comparative studies with other fields, instead of big conferences covering all aspects of Tamil studies.

The time has come for the IATR to assume a new avatar. It has completed its historical role by making people realise the importance of Tamil studies, just as the Dravidian Movement did in respect of its original objectives. A new IATR must now be created to function as a real academic body.

My only satisfaction as President of IATR and a lover of the Tamil people and culture who has devoted his life to Tamil studies is the conviction that IATR has defended its academic freedom by keeping its independence from the government-organised and politically oriented conference held last month in Coimbatore.

However, IATR must be resurrected in a new way. Its renaissance rests on the shoulders of young and sincere scholars of Tamil studies.

Dr Noboru's explanation is valid. The Tamil world still do not seem to get it ... academic research must be explained to the general public because it is their money which ultimately funds research, hence IATR sort of conferences. On the other hand, the sheer support for IATR Conference attracts political meddling by turning an academic conference into a cultural show or worse, a circus! Politicians should not dangle money in front of the IATR but show statesmanship and knowledge by making available such funds. Ultimately, it is the public that needs the education to demand better statesmanship from their politicians.

Salute to you, Dr. Noburu. What you have stood for is a start in that direction.

Thanks for your supportive comment Sir.Dr Noboru deserves our appreciation for sounding his disapproval for usurping academic research to suit political needs.

Tamil texts contain a rich treasure of the past and it needs serious researchers to analyze them in the wake of new developments from other branches of knowledge such as genetics.

Genuine analysis is sure to give fresh leads into the history of India and also of mankind in the last 10,000 years. It is time politicians keep their hands off from Tamil and leave it to scholars.

It is really a great eye opener Dr. Noboru, as you said about the politicians who meddle with the real history and antiquity as well as the future of the Tamil language. It would not be an International Tamil Conference if not all scholars of the world join to conduct and present their research findings. The Tamil language needs scholars and not selfish politicians to create its future. The steps that you have taken and going to take will surely be the begining of a new era for the language.