Recently a 500 year old tree popularly known as Marutha maram in Tamil was given a special name as 'Tholkaapiyar tree", following the conclusion of the World Tamil Conference. 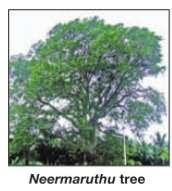 How they arrived at the conclusion that Kanyakumari was Tholkaapiyar's birth place is a question. When we look up at the olden commentators such as Nacchinaarkiniyar, we get the information that Tholkaapiyar was the son of Jamadagni of North India. His original name was Thrunathhoomaagini, (த்ருனதூமாகினி), a Sanskrit name. He came to the South, to Tamilnadu along with his teacher Agasthya. This is what we get from the commentary to Tholkaapiyam, paayiram by Nacchinaarkiniyar.

The Dravidian lovers do not want this information. Any information that does not satisfy their Dravidian thoughts is rejected as racist or as a result of Aryan mentality. I will write a separate post later on one such paper presented in the Conference.

In the current post let me write on this tree.

This tree is botanically known as Terminalia arjuna.

The popular name of this tree in North India is Arjuna.

This tree is supposed to be the favorite of Sita.

This tree is remembered for Krishna's connection.

As a kid, Krishna crawled in between two Arjuna trees with the grinding stone tied to his waist. As a result the trees broke down and the cursed Gandharvas trapped in the tress were released.

This story is found in Srimad Bhagavatham and Harivamsam.

The interesting information from the Indus civilization is that Dr E.J.H Mackay who excavated Mohanjodaro between 1927 and 1931 discovered a steatite tablet depicting two persons holding a tree and a tree god extending his hands towards them. He considered this as the famous Krishna in yamalarjuna-lila.

I tried to locate the image of this tablet in the websites of IVC but could not get.

If this tablet depicts Krishna, it is a strong proof of IVC as post Mahabharata or post- Krishna.

In this context, I wish to analyze the Arjuna tree.

This tree is found where there is underground water current.

In Mahabharata Arjuna was asked by Bheeshma lying on the arrow-bed to fetch him water in a fitting way.

Arjuna shot his arrow on the ground from which water gushed up and fell on the parched throat of Bheeshma.

This shows that Arjuna had identified an underground spring and pierced it with his arrow.

Such identification was done in olden days by means of some symptoms. One prominent symptom is tree.

"If there is an anthill to the north of the Arjuna tree, there will be a water-current at the distance of 3 cubits to the west of the hill and at the depth of 3 men and a half", says verse 12 of Chapter 54 of Brihad Samhitha.

It is possible to assume that Arjuna identified the underground water by a nearby Arjuna tree and shot the arrow with the force required to reach its source.

Perhaps the tree got the name Arjuna due to this episode.

The relevant information for this post is that the knowledge of identifying the underground water by means of the nearby trees was given by a sage named Saraswatha!

The river Saraswathy was on the decline even before 3000 BC, the period of Krishna.

The Dwarakans were forced to migrate due to loss of their city to the seas.

Though they went to the Indus initially (refer previous post in this series), they were forced to move to the east of Indus and seek watery patches on the banks of Saraswathy. The sage who gave the knowledge to identify the water sources along the Saraswathy perhaps got a name as Saraswatha.

Most of the trees he mentioned are seen in many parts of India.

But there is one exception. 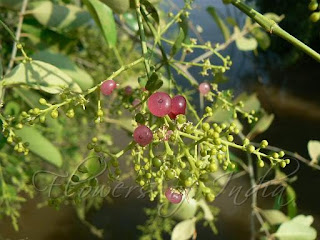 It is the Peelu tree. Peelu tree is generally found in dry and desert regions, in coastal and inland saline soils. It grows in regions where the annual rainfall is less than 200 mm. Sage Saraswatha giving the clues for locating water by means of this tree can be largely applicable to coastal regions or desert regions. The deserts of Rajasthan and coastal regions in Gujarat have Harappan settlements.

The people might have identified the water bodies using Peelu tree as an indicator.

In my opinion, the flora of the IVC regions must be studied to know if the people chose their settlements using this wisdom of ancient India.

In all probability, I guess so.

This knowledge was there widespread throughout India.

Water bodies were identified by means trees and ant hills.

The quality and quantity of water was also known to them.

For example, in the case of Peelu, there will be more salinity in water.

Near Arjuna trees, the water will be tasty.

Near Kapittha (விளா மரம் ) and Jambhoo (நாவல் மரம்), the water body will be huge and perennial and tasty as well.

It is perhaps to safeguard the water bodies from pollution, snake gods and Ganesha were established under these trees.

This makes the people safeguard these trees.

These trees can not be destroyed.

They give valuable clues on the availability of water.

Wherever they are found, the ground can be dug to get water.

Our land is known as Jambhoo dweepa, owing to the growth of Jambhoo trees in abundance.

This shows there must be available plenty of underground water at many places.

According to Saraswatha, if banyan, palasa and udumbara are seen to grow together, there will be plenty of water under them.

If banyan and pippala grow together, the water current will be to their north. (54-96, Brihad samhitha)

Tamil nadu had a number of water bodies until recently.

Number of tree side or water-side shrines of Ganesha and Snake gods were there in Tamilnadu.

This perhaps helped in keeping the water bodies clean.

We had many water bodies until the time of Independence. Almost three fourth of them are now gone.

Habitations have come up in those areas which have only aggravated the misery.

Even though those places are raised, the earth underneath is connected with underground veins that carry the rain water collected at some other place.

During rains these areas will be stagnated. This is what we are seeing various parts of Chennai.

Our ancestors in Sangam period did not spoil the ground nor destroy the important trees. 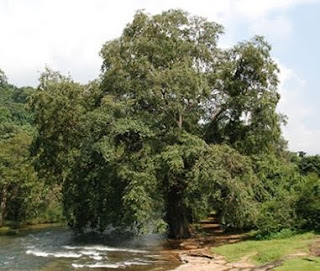 The land of Marutham got its name from the abundant growth of marutham / arjuna trees.

Marutham tree was identified as the symbol of Marutham land.

That could mean that people were not supposed to destroy this tree.

The growth of this tree at a place helped them to dig a pond or a tank to supply water to the fields.

Sangam texts make a mention of the water-body close to the marutham trees.

Here are some verses on Marutha trees.

Young girls used to climb the marutham trees situated on the banks of waterways.

They used to sit on the branches of the tree and sing.

In such posture they resemble peacocks on the trees

The fresh waters of the flooded waterway hits down the Marutham tree on banks.

The fields by the side of marutha trees.

The river with the marutham trees on its banks.

Thus we find that wherever this tree is mentioned, the nearby waterway is also mentioned.

Here comes the verse on Krishna breaking the Arjuna tree.

From all these it is deduced that the knowledge of the importance of this tree was known to Tamils.

The knowledge that this was the tree that was broken by Krishna in his Yamalarjuna lila was also known to Tamils.

The flora and fauna had been more or less same throughout the country.

The knowledge about them and use of them was common throughout India in olden days.

There had been exchange of knowledge between different parts of the country.

The Tamils had known, so also the Indus people and others in other regions of India.

In this context I wish to make a special mention about cocks that Dr Iravadham had analysed and deduced that the name of the Cholan capital Kozhi (later known as Uraiyur) was due to Indus / Dravidian influence.

Like trees such as Marutham, there are certain animals like cock, dog, cat, bull, crow etc which are found commonly throughout India.

Let me discuss it in my next post in this series.

As part of the conservation programme of this species of trees that is on the verge of extinction in Kanyakumari district, the forest department, along with the Indian trust for cultural heritage, organised a formal function Friday in which district collector Rajendra Ratnoo christened the tree, which is the oldest of its kind in the district, as Tholkappiyar.

The name, according to the district collector, was selected for this oldest tree to make the tree a symbol of forest conservation programme in the district as the name Tholkappiyar represents the classical Tamil language. Moreover, this part of Kanyakumari district is believed to be the birth place of Tholkappiyar, the first grammarian of Tamil language.

This particular tree, found as a single giant on the banks of the canal at Eshanthimangalam, is 150 ft high and has great medicinal value. These trees were commonly found here but were cut off for construction purposes.