A “secular” verdict on Ram Janmabhoomi.

The main issue whether a temple pre-existed in the place of the Masjid had been answered in the affirmative by the Allahabad High court. In the face of voluminous records and ASI report indicating that there indeed existed a temple in that place, it has been accepted that Ram temple had been there before. I think with this pronouncement the litigation is settled clearly. But the court has chosen to play “secular” in the way that “secularism” is practiced in this country.


There are 2 ways of seeing a litigation of this kind. If as an ordinary citizen of this country, I am in possession of a land which was procured by my ancestors through forceful occupation and I continue to occupy it, will the same court consider that the land rightfully belongs to me?


Second, I claim that I am the legal occupant of a land but it comes to be known that some historically important items are found buried in my land, then will I continue to be allowed to stay in that land? Suppose I find a pot of copper coins dug out from my land, can I claim the coins as mine? Should I not be expected to hand over them to the government? Suppose my land stands on a vast area where remnants of a past culture are seen buried, would I not be asked to vacate the place and allow the government to protect it? The land no longer belongs to me.


The same applies to a larger issue such as the Janmabhoomi issue. It is accepted by the court that the Janmasthaan stood there, but the final verdict on possession is not in tune with that acceptance. By dividing the land into 3, the court has gone beyond the parameters of the case and Natural justice that must follow with the acceptance of the disputed place as the Janmasthaan of Rama. The court has played a ‘secular’ game making me wonder whether the Congress government has any hand in the verdict. In today’s India, the judiciary does not hold a clean image.


This doubt on an ‘invisible hand’ of the government in the judgment is strengthened by the way the events developed over the last few days and also by what the sky map says for the time of verdict.


Initially the verdict was slated for 24th. But the kind of happenings that came after that gave an impression that the Congress government was playing an invisible game in getting the verdict postponed indefinitely or until the CWG would be over. It had feared that someone is going to be hurt by the judgment. Congress is a party which can not accept a verdict that does not favor the Muslims. If the verdict is in favor of Muslims, there is no problem. If anyone raises their voice against the verdict, they will be damned as Hindutwa forces or saffron terrorists or fascists. But if it is held that the place is the Janmasthaan, then the Congress will have worries on how the Muslims would react. But a judgment of this kind will be a convenient one to safeguard the ‘secular’ image.


Now coming to the astrological pointers. 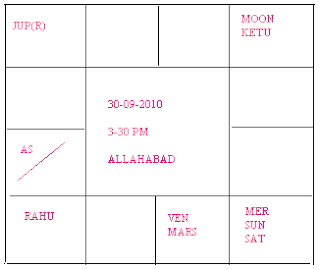 Look at the sky map at that time.
The verdict time lagna was Capricorn lorded by Saturn.
This must be analyzed along with the Indian Independence chart.
The janma rasi of India is cancer.
The rasi lord is moon.
The reckoning is done form cancer.
The rasi lord moon has gone into Virayasthaan also known as the hiding place in the 12th from Cancer. This means the original self of the country had been muted.
This rasi lord moon happens to be in the 6th house of litigation in the verdict time chart. So this judgment will not be accepted and further litigation will be on.


The most important indicator is Mercury, the 2nd and 5th lord in natal Indian lagna. It was at 0 degrees in rasi sandhi at that time.(between Leo and Virgo).
In the judgment time chart, mercury is the lord of the crucial house of Dharma and also signifies Vishnu. Mercury also happens to be the 6th lord – signifying itself as the object of dispute. But as it was entering the 9th house of Dharma – facilitating the delivery of Dharma – it was frozen at that moment. So it was dharma partially delivered.


The suspicious role of Government in influencing the final verdict is seen in the 9th house of the verdict chart. Let me explain how.

In analyzing the time chart of this type we have to first see the lagna lord and its position. It is Saturn which is well entrenched in the 9th house of justice aspected by the Jupiter, the lord of Justice. So the judgment must have gone in the right direction.


But look at the sun behind Saturn. The sun is the signifactor for Government and is within 1 degree behind the lagna lord Saturn. In this position it is called Ithasala yoga. A fast moving planet coming behind a slow moving planet causes a yoga called Ithasala. The sun signifying the Government causing combustion of Saturn and also in Poorna Ithasala shows that the Sun / the government has scored a victory over the judgment or the events. In Navamsa chart also, sun is exalted and behind Saturn.

This smacks of some influence by the government about the way in which the judgment must go. And the judgment seeking a division of the land against expected norms in such a suit certainly raises our brows.

However ultimately, the existence of Ram temple has been accepted by the court. Ram temple coming up in all grandeur will also boost up the economy of Ayodhya vaasis – both Muslims and Hindus alike. Even today numerous Muslims are making a livelihood by their trade that is dependant on Ram temple.


Some 15 generations ago, their ancestors had worshiped Lord Rama only in that place. Their ancestors had been threatened, harassed and forced to convert to Islam against their wishes. For the first few generations, they must have cried at heart for the kind of fate that befell on them. But as time passed, all those had been forgotten. With the “secular” forces in Independent India now firmly entrenched, they have been completely made to forget their roots.


Their land belongs to Rama, Their ancestors belonged to Rama. Their livelihood is dependant on Rama. It is their temple that awaits rebuilding. The consecration of the sublime energy done long ago at that place is still trapped at that place and is waiting to be used by the masses. It will be in the fitness of things for the Muslims to dedicate the entire land to Rama and facilitate the coming up of the temple. I am sure all the Ayodhyavaasis are for it.

3. Whether the mosque was built after demolishing a Hindu temple?
The disputed structure was constructed on the site of old structure after demolition of the same. The Archaeological Survey of India has proved that the structure was a massive Hindu religious structure.


5. Whether any of the claims for title is time barred?
O.O.S. No. 4 of 1989, the Sunni Central Board of Waqfs U.P., Lucknow and others Vs. Gopal Singh Visharad and others and O.O.S. No.3 of 1989, Nirmohi Akhara and Another Vs. Sri Jamuna Prasad Singh and others are barred by time.