Previous articles of this series can be read here.

Minoans of Crete are considered to be the earliest people of Greece. In the earlier posts we saw only the Kri-Kri connection to Tamil word and the Vedic astrology concept of Mesha rashi (Aries). In this post let me show other connections to Tamil or rather the South Asian or South East Asian people.

The name Minoan sounds close to Tamil word Minavan. It means fisher man. The Pandyan kingdom was originally located in 49 islands of the Indian Ocean between  the present day India in the north  and Australia in the south and extended till Africa in the east and Indonesia in the west. It is probable that some of the regions of the submerged parts of Sundaland  and Australia were originally peopled by Pandyan subjects, the Tamil speaking people. Their main occupation was fishing as they were bound by the sea. Their locations were mainly present as the peaks of the now completely submerged Ninety Degree East range and the extension of the Western Ghats upto Madagascar. Andaman and Nicobar islands are the still surviving parts of the Ninety Degree East range. Maldives are the peaks of the extended Western Ghats. 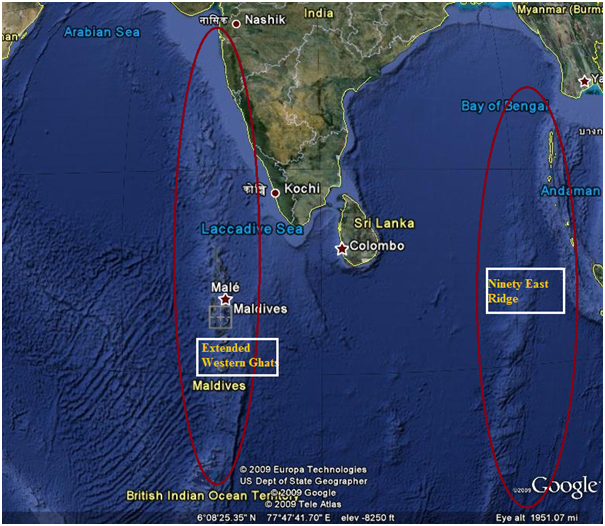 The early names of these lands as told in Tamil texts also show that they were sea-bound lands. Apart from fishing, they raised cattle too as it is known from the Sangam text verse that says that the olden tribes of “Ayar” – the cow-herds managed to survive the sea floods and they along with their king landed in the Southern tip of South India. It is also known from these texts that the Pandyan king annexed territories from Cholan and Cheran kings to make place for these Ayars to settle down. One such region is Mutthoor kooRRam where the present day Kangeyam is situated. Kangeyam is known for Bull fights. I am mentioning these here as an introductory ideas for what I am going to say later on the Cretan bull exercises. From Sangam age verses on these Ayars we get know many things about the life of cowherds in the past.

What is interest is that if we go further North in the Western Ghats we arrive at continuing mountain ranges where people called as “Mina” are still living. These regions and these people are still there in Gujarat and Rajasthan. Their life style resembles that of an ancient Tamil in the sunken mountain peaks of the Indian Ocean. For example, the Mina tribes still live one family in each peak. That is each family occupies a peak – actually on small hill-tops of long range of hill chain in Gujarat and Rajasthan– and live there as a separate entity. They grow cattle, graze them within the peak they live. Nowadays they have spread out. But this kind of living is an inevitable one in the chain of islands (peaks of Western ghats in Indian ocean), where the people were separated by the sea. Each family would have been living on top of a peak – so as to avert danger from water. They had grown cattle and also must have engaged in fishing. This was how the ancient Tamils would have lived before the last deluge gobbled up the peak- islands.

The Mina people are also known for stealing and plundering – something I explained of the Eyittiyas in Part 21. They lived in the southern part of the Western Ghats whereas the Minas are in the northern most parts of the ranges that continue upto Rajasthan.

The entire western ghat range served as a path way for the sea-bound people of Indian Ocean to settle down at various places of the ghats. The Mina tribes of Gujarat and Rajasthan must have been the surviving tribes of the ancient people of the Indian Ocean habitat. Their present habitat is on low level hillocks. They could have as well chosen to live on the plains of Gujarat and Rajasthan. But their choice of the low hill tops – one for each family smacks of an old habit. But their name as Mina with no chance for fishing in the region where they live now shows that it had been with them since long – that is, even before they shifted to this part of the mountain range. In the habitat at the Indian Ocean peaks, they must have gained this name as Mina which means fish.

Taking up this idea of Mina to Minoan, the link does exist from King Minos onwards. The name as Minoan civilisation was coined recently by researchers. It was obviously taken from the name of king Minos. His period comes after the 4-pillar story of the Titan Gods that included Krios. In that story narrated in Part 26, Zeus was the hero who finally restored order. King Minos was the son of Zeus born to Europa after whom the continent of Europe has been named. That she is Ai-rUpa (pronounced as “I-roopa”) – the one in the form of Goddess Ai is a connection from Tamil – Vedic culture, I will be writing it in another post. Here I am just saying that the name Minos sounds Meenva – the one connected with fish.

It is said by researchers that there exists a name Minoan in Linear A. According to La Marle's reading of Linear A, it is read as mwi-nu ro-ja (Minos the king). The royal title ro-ja is read on several documents, including on stone libation tables from the sanctuaries (1 )

This name Roja sounds like Raja – the way the king is addressed in Tamil and everywhere in India. “mwi-nu ro-ja” sound like “Mina raja”  or “ Meenava Raja” – the king of fishes or fisher folks. This title was apt for the people who live in the sea and subsist on fishing.

The paintings of fish are common in Minoan art. One illustration is shown below. 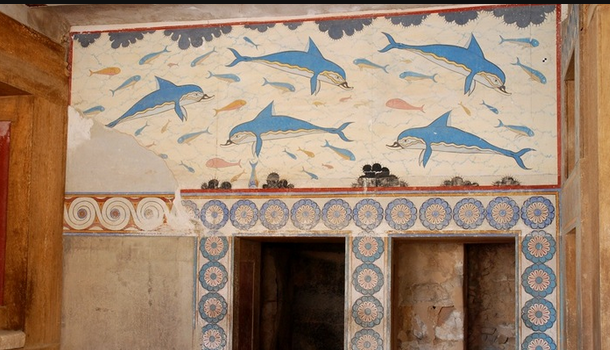 The following picture from Minoan civilisation shows the fisherman with his catch. Note his body colour. 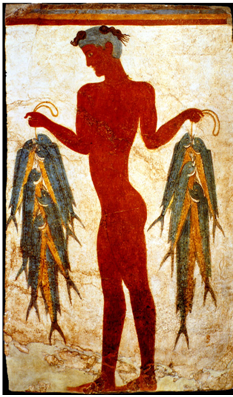 In various arts of the Minoan the body colour is shown as dark or white. A mix up of people of different body hues had happened in that region. The dark colour is possible only for those in tropical regions. The dark skinned people from fishing community had migrated to Crete.

Wherefrom they had migrated? Here is a picture of a man giving us the answer for this. This man has something in his hand. 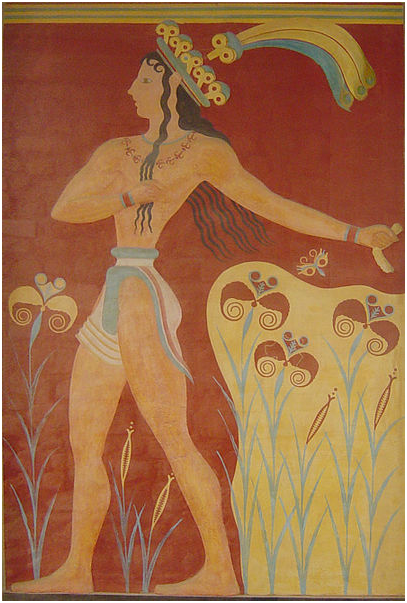 Researchers think that he is guiding cattle. One researcher even says that he is a priest leading cattle for sacrifice. Now look at the thing at his hand. It is not attached with any rope or an animal. It is clearly shown as – a BOOMERANG 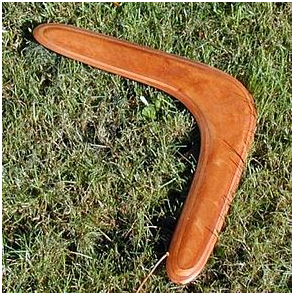 This is how a Boomerang looks. Now look at the thing in the man’s hand.

This is also a Boomerang. The man is preparing to throw the boomerang. That is depicted in the painting.

There are only two places in the globe where Boomerangs are used, one is the aboriginal regions of Australia and another is near Madurai in Tamillands. The presence of boomerangs in Australian tribes was accepted as a native weapon. But when it was discovered that Kallar tribes near Madurai were using this weapon for ages, it was intriguing. But with a genetic study on Piramalaik Kallar, a section of Kallars, the link has been understood. This genetic study showed that these people are direct descendants of African people with their connection going upto 70,000 years ago.

How could these people come from Africa to South India? If we accept the Tamil literary contention of ancient Tamils living in the Indian Ocean regions (now sunken), it is easy to accept that people had got dispersed from their Indian Ocean habitat. There also exists recent research of Indian influnece in Australia about 4000 years ago. No one migrated from South India to Australia. The people who were living in scattered islands of Indian Ocean as far as Australia had got cut off from the  Indian side people when the Indian ocean habitas got completely lost.

( A note on Minas here in connection with Tamil Kallar tribes whose links go to Africa – perhaps through the link of the sunken Western ghats section. Kallar means thief. But they were valiant people. There is inscriptional evidence that they guarded the temples. Perhaps they were the "Galla", as how the first generation of Kshatriya vratyas were called. In Tamil Galla got converted as Kalla due to absence of ‘ga’ letter in Tamil.  A section Mina tribes too were valiant ones and had served as soldiers in ancient times. Thus similar traits can be seen between Kallars and Minas strengthening the contention that they originally belonged to the Indian Ocean habitat in a remote past.)

Another illustration of interest to us depicts monkeys! 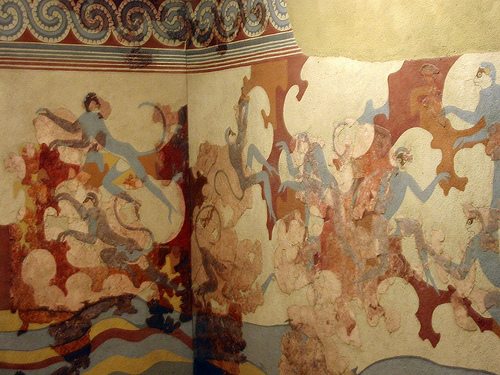 It is normally expected that an artist wanting to show monkeys would depict the monkey life – as how it is making mischief or jumping from tree to tree. But no such regular incidents are shown in this picture. This scene reminds us of the monkeys building the bridge of Setu across the sea in Ramayana. This idea may seem preposterous but look at the scene and the body of the monkeys. A researcher of the Minoan civilisation admits that there is no way the painter of that time could have seen these monkeys. These monkeys are not like the ones that are seen today in Greece. Generally monkeys are tropical in habitat. These monkeys look like the ones that we see in South India. (Shown below) 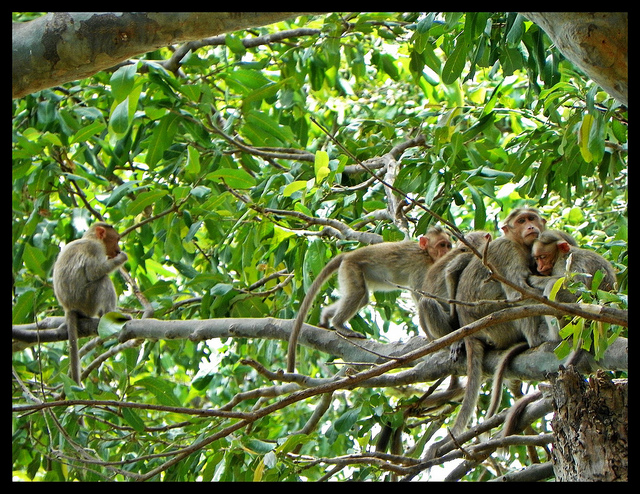 In Minoan  scene the lower part shows waves as if the base is the sea. On the right side the monkeys are seen pulling or plucking the branches. On the left side the moneys are seen to be climbing on boulders. The monkey on top on the left is seen to be placing a huge rock. (or it’s  an aberration, I am not sure). The scene looks like a more realistic illustration of the building of the bridge across the sea by the monkeys called Vanaras. In the description in Ramayana, the monkeys used boulders and tree trunks to form a path way across the ocean. How could this be created in Crete unless the people of that time had retained a memory from a land of their origin in the Indian Ocean?

The Tamil connection to the memory of this scene from Ramayana cannot be doubted, as there exists a poem from Sangam age where it is said that the land where Rama stayed to build the bridge across the ocean was in the Pandyan land! (2) This poem used the term “Gawriya” (கௌரியர்) for Pandyans – the term by which they were known in a remote past. It means coming in the lineage of Gowri or Meenakshi who was the princess of the ancient Pandyan lineage. She married Shiva and gave birth to Kumara or Skanda. It was in her times, the script of Tamil was developed and First literary assembly called Sangam was inaugurated.

The poem says “in the ancient tip of land where the sea crashes, of the Gowriya who are always successful with their spears..” . The reference was to the region in Rameswaram which has been under the control of Pandyan kings from times of yore. The presence of this verse shows the remembrance of this place by the subjects of Pandyan king. This story was folklore in those times. The people who had left this part of the world are sure to remember it and reproduce it in the new places where they had settled. There are other features connecting Minoans to Tamils. We will see them in the next post.