All the articles in this series:-

The current  article can also be read here:-

According to anthologists the Konkan coast was the former home of the Oraon tribes of the Mundari speaking groups. The Konkan coast is a raised or reclaimed region. Such region is known as Urvi or Ur. The people of Ur are known as “Uran” or Uravan” in ancient Tamil. The name Oraon sounds like these words which refer to the people living in “ur”.

Researchers believe that Ur, a place in Mesopotamia was originally the first place of organised city-dwelling. But a few leafs from Tamil Sangam texts and Mahabharata tell a different story. During the Tamil Sangam age culture, the land forms were classified into five, of which one category is about fertile regions irrigated by water, called as “Marutham”. The place of dwelling in Marutham was known as Ur and there were many ‘Ur’s named after some special feature. The people of Ur are known as Uran or Uravan or Ooravan or Ooran.

Coming to the Mahabharata source, the derivation of Ur is found in the episode of Parashurama. The term Ur is derived from Uru, the Sanskrit word for ‘thigh’. Mahabharata says that when Parashurama caused a massive devastation to the warrior class, there happened a sinking of the earth. This is conveyed as though the earth has sunk due to the misdeeds of the people as there were no kings to bring out orderliness. Seeing the Goddess Earth sinking, sage Kashyapa lifted her up in his thigh, i.e., uru. It is because of this the Earth came to be known as ‘Urvi’. {1}

This shows that anywhere, if the earth is lifted up from sinking, it is a manifestation of Urvi and the place comes to be called as Ur. It becomes fit for living, because in that episode Goddess Earth asks Kashyapa to bring back the descendants of the kshatriyas who were living incognito for fear of Parashurama. Therefore Ur is a place lifted from sinking and it becomes habitable thereafter. It must be recalled here that Parashurama was linked with reclaiming or restoring the sunken or sinking parts of the west coast on peninsular India. He did that after his war on kshatriyas. The episode of Goddess Earth’s talk with sage Kashyapa conveys that the western coastal region was sinking soon after the war on kshatriyas by Parashurama. However it was reclaimed by him later.

Even in the Tamil culture explained above, Ur is connected with some waterway nearby. In a surprising connection, the people living in the artificially created floating islands of Lake Titicaca in South America are known as Uru People! This name Uru with its relevance in a faraway place like South America is an example of the prevalence of same ideas related to same words prevailing over a vast part of the globe with its genesis in Vedic culture.

The period of this episode on Urvi, that is, the earth getting lifted up from sinking does match with the reclamation of the western coastal lands by Parashurama. It is in those regions, fresh settlements were made. Similar kind of lifting from water had happened in Ur of Mesopotamia (in present-day Iraq). Ur was originally a coastal city on the mouth of Euphrates in the Persian Gulf but due to shift in coastline it is inland today. The Persian Gulf was a high land before Holocene and it started getting flooded in course of time. Any difference in the water level in Arabian Sea had an effect on the level of Persian Gulf too. If during Parashurama’s times, west coast of India had risen up (due to a fall in the Arabian Sea level), similar trends could have been experienced in the coasts of Persian Gulf. Therefore the Ur had come up there.

In the following figure the white patches along the coast were above the sea level during Holocene. The arrow mark shows the Persian Gulf which was dry and landed. 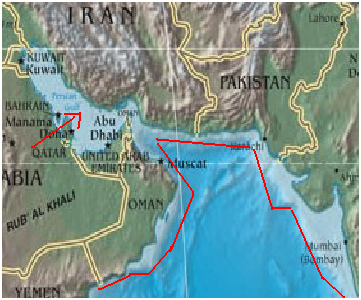 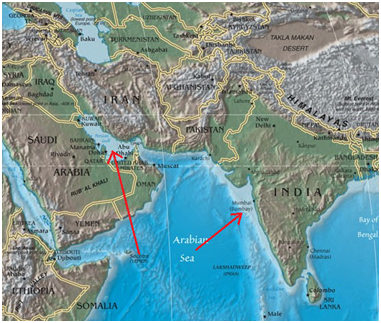 Location of Ur near the mouth of Euphrates is shown below. Today it is inland, but the coast was closer to it in the past when the water level was high. By its name, it is known that it was a raised land from near water. 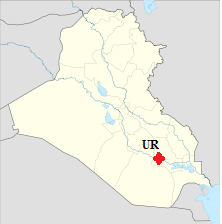 This place Ur of Iraq was spelled as ‘Urim’ in Sumerian language that resembles Urvi, the name that Earth came to get for being lifted on the Uru of Kashyapa. (symbolism for earth- rising). In the Sumerian legend, Goddess Nanna is said to be the Goddess of Ur. In a surprising similarity, the raised (or extended) west coast of India was ruled by king Nannan and his descendants (before the Kadamaba dynasty), according to Tamil Sangam texts. Sumerian Nanna has no etymological explanation. Tamil Nannan means “good person”.

Similarly only in the context of Lake Urmia, the name Parasuwash is mentioned. Lake Urmia is in the border between Iran and Turkey. The 9th century BCE Assyrian records mention about “Parasuwash” in the context of Lake Urmia.  Does it show that Parashurama’s followers went on to occupy the raised regions of Lake Urmia? In a surprising similarity, Urmia in Syriac language means “City of water”! This is further proof of connection between Ur and water which is explained only in Indian texts (Mahabharata).

The following figure shows Lake Urmia and Ur in red circles. 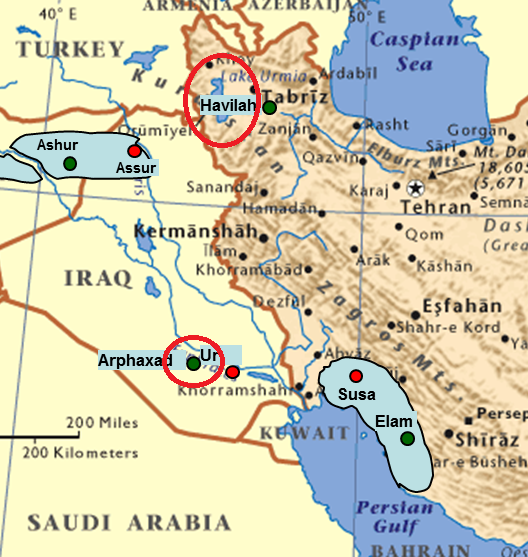 In Tamil Sangam parlance the Ur is situated where good irrigation facilities exist. The Ur will be criss-crossed with rivers or dotted with ponds and lakes. The dweller of Ur is Uran or Uravan. The Oraon tribes, who claim themselves as the descendants of Vanaras of Ramayana period, could have occupied the lifted-up regions of the west coast. Their name Oraon could have been the corrupted forms of Uravan or Uran, the dweller of Ur.

It must be noted here that the word “Munda” refers to a raised platform in the coastal areas of Tulu speaking regions of the west coast of peninsular India that was supposed to have been reclaimed by Parashurama. This “Munda” was used by fisher folks to spread their catch. Even the mangoes grown in this coastal area are called as “Mundappa”. This raises a question whether Munda is the local term for Ur which is derived from Sanskrit Uru. Like Ur, Munda is a raised area, safe from inundation and therefore fit for living.

After all the killing expeditions, Parashurama settled down in a place in this region called Shurparaka. The name Shurparaka is derived from the Sanskrit word “Shurpa” which means winnowing basket. A winnowing basket is of the shape of a gently raised structure. Its function is to remove the finer elements from coarser sediment. The hard- based coastal land that is left high after the finer and loose particles were washed off by the sea waves perhaps left an appearance of a winnowing basket. Parashurama settled in such a land in the west coast. Today this place is known as Sopora situated in Maharashtra.

Names of places with Munda are very common in this coastal part of Karnataka. It is more surprising that this name Munda appears in the names of villages throughout India. There are nearly 801 villages having “Munda” in their names according to 2011 Census. They are spread throughout India including Jammu- Kashmir and Andaman & Nicobar. This sheds light on a different feature of what actually a Munda is. An analysis of that is continued in the next article in this series.

//
Muṇḍa = Head. मुण्डे मुण्डे मतिर्भिन्ना = Each head (man) has different views.
Muṇḍera = Top part of a room (HindI), Modhera sun temple in Gujrat.
Muṇḍaka = Small head (student), Muṇḍaka Upaniṣad (initial teaching), Muṇḍā = small boy, student (in Punjabi)
Mura = Iron ore (refined & powdered)-It is now called Murrum, used to spread on semi-finished roads. Narakāsura of Prāg-jyotiṣa-pura (east end of Asura region in Morocco, Romaka-pattana of Sūrya-siddhānta, 900 west of Ujjain or Lankā.). His town was covered with iron fencing, so it was called Mura. The tribe itself is called Moor throughout history and the country is named as Morocco after them.

Muṇḍa (in Orissa) or Muṇḍe (in Maharashtra) = Teacher for Muṇḍaka (small boys) or follower of Munṇḍaka branch of Atharvaveda with upaniṣad of same name.
Oram = aurum = persons who refine gold ore into metal. (Aurum = gold in Greek)

Kandulanā = Ant (its motion on skin causes Kaṇḍūyana = scratching). Mining of small particles of gold embedded in small rocks is like searching of sugar in sand-mass by ants. So, gold miners were called Kandulanā = ant. This has been misunderstood by Herodotus & Megasthenese who devoted full chapters to Gold digging ants of India.

Hi, Jayasree. Please remember there is at least one other candidate for UR: Sanliurfa in Turkey. This city is the location of Göbeklitepe, of majör importance as on my guest Blog for Dale Drinnon:) Thanks. The Turks added "Sanli" meaning "glorious" to "Ur" (fa). This classic agglutinative partical is written with a Turkish S
with a tail which makes it "Shanli"
moreover the "i" is dotless which also changes the sound. "Gazi", "hero" has also been added to Gazi+Antep for roles in Ottoman wars.