Pongal – Tamilnadu’s Makara Samkaranti getting stripped off its Hindu identity.

What is Makara Samkaranti for the rest of India is the day of ‘Pongal’ festival in Tamilnadu. Catching up with the difference in the name, the late Karunanidhi found an opportunity to rid this festival of its Hindu identity and chose to call it ‘Egalitarian Pongal’ (Samatthuva Pongal) that can be celebrated by everyone including those of the Abrahamic religions. A decade is gone since then, and Karunanidhi also found his rest but times are such that we are seeing now what he had sown.

Turn on any channel in the TV, you are seeing only ‘Samatthuva Pongal’ – not just ‘Pongal’ celebrated by Muslims, Christians and atheistic politicians. “Samatthuva Pongal” has gained an infectious spread across the State particularly among churches and educational institutions run by the minorities. The Churches are hitting many birds with a single event of this celebration by projecting themselves as the saviours of farmers and as being open-minded and use this as a tool of inculturation of the converted and the future converts.

The only sense of satisfaction for an informed Hindu is that it is better for these once-upon-a-time Hindus to celebrate Pongal than to be made to dance for the Thanks Giving Day which is becoming a yearly celebration in Tamilnadu!

Not to be left behind are the Muslims who have also taken the hint from Karunanidhi and made Samatthuva Pongal a yearly event in their educational institutions. Initially many thought that Muslims would not show interest but what makes them embrace this is known from a report published by The Hindu in 2015 on the event of Samatthuva Pongal organised by the management of a Muslim minority college at Kilakarai. The principal of the college was reported to have said that Samatthuva Pongal helps in burying the religious and communal differences. The only commonality between Pongal of the Hindus and Samatthuva Pongal being the Pongal dish, one is at a loss to understand in what way this dish helps in burying the communal and religious differences!

The actual game plan behind this Samatthuva Pongal became palpable this year on seeing a news report in a TV channel that showed a small group of tribes, not familiar with Pongal in their culture, being made to celebrate this Samatthuva Pongal as a community celebration of three religions! These tribes known as “Paligar” were warrior class who were once employed by Vijayanagara kings to defend the frontiers of their kingdom, says R.V.Russell in volume I of the book ‘The Tribes and Castes of the Central Provinces of India’. Their Hindu root is more than obvious by Vijayanagara connection. They were earlier found in the Western Ghats but brought and settled in Nellai district in Tamilnadu in 2001. Easy prey for religious poachers, they are being cosied by the two religions by means of ‘Pongal’, projecting an image that it is being celebrated by all the three religions! 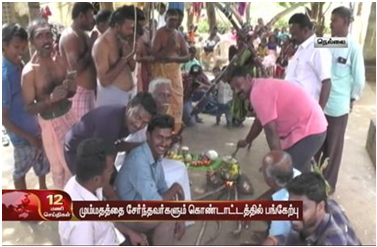 What Hindus had not cared to thrust on these tribes, their handlers had done and made it useful for the two Abrahamic religions – whoever among them is skilful would help the tribes find salvation through Pongal!! Very soon those tribes can be expected to celebrate this festival in their newly found avatars as Christians and Muslims.

Appropriation of Hindu symbols is not new, but hijacking a Hindu festival wholesome is what is being witnessed in Pongal. Cooking the Pongal dish in the open and sharing it with everyone is not a festival – but we have been made to believe it to be so. Karunanidhi’s original plan was to make the day of Pongal the New Year for Tamils and help in combining it with Christmas and New Year. His daughter Kanimozhi worked for it through a Government sponsored festival named “Sangamam” that was started on Christmas day and ended on Pongal day. It is not difficult to know what kind of Sangama she and her father had in mind. Their brainchild is coming off age now with every Hindu being made to pass through Samatthuva Pongal during their study years – the years they are most vulnerable for tall talks on equality, but Pongal has nothing to do with equality. It is unfortunate that even the Hindus-managed educational institutes have fallen for this craze of ‘egalitarianism’ and celebrate Samatthuva Pongal in their premises. Why don’t they celebrate it as just ‘Pongal’ with its Hindu components?

Is Pongal a Tamil festival?

The brazen truth behind Pongal is that it is not a “Tamil” festival. There exists no record of Pongal festival anytime from Sangam age to later day Tamil dynasties.  The only record comes from the Madras Journal of Literature and Science, 1833-34 edition, which describes the way Pongal was celebrated in Tamil lands. It was the same as how it is celebrated by Hindus now in their homes. It was a two day festival then, with Pongal being the first day followed by Māttu Pongal (Pongal of the cows) the next day. On the evening of Māttu Pongal, the temple deity was taken out in a procession on horse-back in hunting posture. On the same day, the Brahmins would foretell the fortunes and mis-fortunes brought by the deity of “Samkaranti” (Samkaranti Purusha) using astrological calculations!

This shows that Pongal was basically Samkaranti festival in the Tamil lands too, with only the name having come into vogue from the popular dish of the day. Cooking Pongal dish is part of any celebration and not Pongal-festival specific. There are proofs to substantiate this from old Tamil texts such as Silappadhikaram. An inscription of Rajaraja Chola I refers to 34 festivals of which 12 are Samkaranti festivals celebrated every month. So Samkaranti is not unknown to Tamil lands.

Pongal festival cannot be called as harvest festival too, as epigraphic evidences show harvest a month earlier, in Karthigai itself. References to ‘Kaarthigai Kāsu’ and ‘Chithirai Kāsu’ in medieval inscriptions do indicate that harvest-payments were made much before the date of Pongal.

What was Pongal festival in Tamil lands?

The current name for the festival and the festival of ‘Māttu Pongal (Pongal for cows) are indicative of their origins from cow-herds of Krishna cult! The previous day celebration of “Bhogi” not finding mention anywhere in literature or epigraphy in Tamil lands and even in the Madras Journal quoted earlier, it is obvious that it had a pan-Indian influence. A Tamil astrological text called “Varushadhi nool” which is the guide book for writing almanacs says that Bhogi is celebrated in honour of Indra - the festival in whose honour was stopped by Krishna. Indra retaliated by heavy downpour but Krishna protected his folks by holding Govardhana hill as an umbrella.  Subdued by this act Indra sought forgivance and the result was introduction of Bhogi festival in his honour, on the day before Makara Samkaranti.

The beating of drums and bonfire on that day was a remembrance of the sport of Krishna dancing on the snake Kāliya. Young Krishna suffered some snake bites in that event and was kept awake by beating the drums while he was being treated for poisonous wounds.

Māttu Pongal is a proof by itself of its origins in Krishna cult. These festivals are a replica of the Annakut and Govardhan Puja in Dwaraka and regions associated with Krishna. Only the time of the festivals had changed.

This kind of worship must have been confined to cattle breeders only (people of Mullai / Aayars) initially and that may be the reason it was not wide spread among others to have found a place in scriptures or inscriptions. In fact there is an opinion that Pongal was the culmination of the month-long Vaishnavite vrat in Margazhi. In course of time, all the people had started following it along with Samkaranti – with Samkaranti having had longer presence and patronage from kings.

Karunanidhi has given it greater importance thinking that he is de-Hinduising it. Poor chaps – the Christians, Muslims and anti-Hindu Tamil speakers – they are clamouring after Krishna–cult that was once confined to a section of people of Tamilnadu.

It is time Hindus wake up to the reality of the long standing festival of Samkaranti fused into Pongal of Krishna cult and not fall into the trap of Samatthuva Pongal.

Well explained. I tried explaining this to people and the response I received from some was that I am being a Hindu fanatic. People are just ignorant.

Dear Jayasree Madam, Maybe you are aware of this but just wanted let you know that the Chinese celebrate their new year i.e first day of their lunar new year on the day after thai amavasai. Not sure if there is any indic significance to this.

The Chinese and Tibetans follow the 60 year cycle of Jupiter Era (Barhaspatya mana) of the Hindu system. They have names that correspond to Prabhava, Vibhava etc. Jupiter Era is a derivative of much olden Vedanga Jyothisha era wherein importance was given to the winter solstice which began at that time in the solar month of Thai (in Makara). Instead of solstice the Chinese follow the lunar month that begins (in Thai) after Sun enters Makara. All eastern and south eastern countries were influenced by Vedic culture which became possible due to land connectivity with those countries. The climatic and topographical features helped in movement of people from India to Fiji. Buddhists might have taken the Indian calendar system to China.