Ramasetu Project will result in disputes under international law.

Ramasetu: GOI should withdraw affidavit in SC. Project will result in disputes under international law. 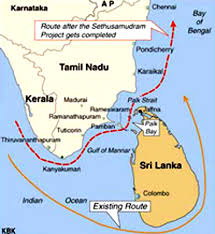 Rejection of Pachauri Committeee report by GOI is a serious issue which has ramifications under international law. Any Setu channel cutting midway through the Rama Setu, even if close to India's territorial waters has an impact on the Sri Lankan coastline and fishing activities.

INDIA is bound under international law to take Sri Lankan Government into confidence before undertaking any project in these waters.

In particular, the choice of an alignment cutting through Rama Setu will result in the destruction of a monument which stood as a TSUNAMI wall during the last Dec. 26, 2004 Tsunami. Tampering with the structure may have serious impact on Indian and Sri Lankan coastlines in case another Tsunami strikes (which is very, very likely given the movements in plate tectonics along the India-Burma-Sunda plates).

Sri Lankan govt. can take the case to Intl. Court of Justice under international law.

There is the additional factor of Kachativu agreement signed by Indira Gandhi which clearly recognized the rights of Sri Lanka under international law and based on these a strong case exists for Sri Lanka to claim that any channel cutting through the shared INTERNATIONAL WATERS (though technically within the Indian side of the territorial waters) which have a serious effect due to the future devastations which will be caused to Sri Lanka coastline in case another tsunami strikes and the so-called Setu Channel is operational which will draw the energy of the tsunami close to the Indian and Sri Lankan coastal boundaries.

The tampering with Rama Setu to create a navigation channel cannot be a unilateral decision by Govt. of India.

http://en.wikipedia.org/wiki/Kachchatheevu The channel runs too close to Kachativu for Sri Lanka's comfort. The agreements themselves are subject do political disputes. The proposed Setu Channel will impair the fishing activities by both Indian and Sri Lanka fishermen, thus rendering the Kachativu agreements virtually DEFUNCT, null and void.

If Sri Lankan Govt. issues a formal diplomatic complaint, Hon'ble SC will HAVE TO take note of it. IN any case, the case pending in SC already underscores the fact that Sri Lankan govt. agreement should have been taken and that Sri Lankan has raised serious ecological objections to the proposed sethusamudram project itself. GOI will land up in an international maritime dispute.