Apart from the major flaw regarding the number of Nakkirar-s in Sangam Era, there are many other flaws found in Vedveer Arya’s paper in The Chronological History of Anceint Tamilagam (From 11226 BCE to 5th Century CE)

For example in the abstract of his paper he says,

“The Pāndya king Ukkiraperu Valudi lost his supremacy to the Cholas and the Cheras that marked the end of the third Sangam era.”

But the fact is that there is no proof from any quarter, literary or otherwise to say that Pandyan King Ugra Peruvaɻuti lost his supremacy to Cholas and Cheras.

In the next line he says,

“The rise of the Chola King Karikāla has ended the supremacy of Pāndyas.”

The fact is that there is no proof to substantiate this claim. Karikāla did make many victories but there is no way to say that Pandyan supremacy was ended by him. His major victory was against the Cheran king Peruncheraladhan who, however was more eulogised than Karikāla in Purnanuru 66.
Moreover Pandyan king Nedunjeɻiyan who ordered death for Kovalan seems to be later than Karikāla as per Silappadhikaram. The Pandyan kingdom had continued with glory after Karikāla and during Cheran king Senguttuvan’s times. Therefore it is not correct to say that Karikāla ended the supremacy of Pandyans.

Like this the list of fallacies goes long, but in this article his claims on Kharavela are being challenged.

In the abstract he says,

“The Kalinga king Khāravela invaded and annexed Tamilnadu during his 11th and 13th regnal years.”

There is lot more research needed about Kharavela’s impact on Tamil lands. From the available sources, it can be said that he had very less role in Tamil lands other than assisting Cheran king Perum Cheral Irumborai in defeating Adyamān Nedumān Anji. This is made out from Line 11 of the Hathigumpha inscriptions which says that Kharavela broke up the confederation of Tamira countries of 113 years.

The confederation of Tamira countries of 113 years looks like the confederation of Veḷir kings. The Veḷir kings were not tolerated by the three dynasties of Tamil lands towards the end of the 3rd Sangam Era. We often come across groups of Veḷirs in war with main Tamil dynasties. For example Pandyan Nedunjeɻiyan who won at Talaiyalanganam faced 5 Veḷirs together in the war along with Chola and Chera king. Two were beheaded, as per the account of Sinnamanur inscriptions, but they were not Chola or Chera. That means only the Veḷirs had lost their life and kingdom.

Similarly, the Cholan king Karikāla defeated 9 kings of small territories which could be a reference to Veḷir territories.

The biggest catch was Adyamān. Known as Satyaputro Adyamān Nedumān Anji (of Jambai inscriptions) this king who ruled from Thagadur (in present-day Dharmapuri in Tamilnadu) was killed by the Cheran king Perum Cheral Irumborai. From his location in Chera land, how the Cheran king managed to come all the way to Adyaman's country in Dharmapuri of Tamilnadu and  and won over him is a mystery that can be solved if we take into consideration Kharavela's role in the war against Veḷirs.

The mutual understanding between Chera and Kharavela comes from another hint found in Hathigumpha inscriptions.

This is the first line where Kharavela tells about himself as

The Airena identity refers to Airai cult and Airai worship. There was a hill called Airai in the Western ghats where the female deity called Koṛṛavai – (கொற்றவை - a form of Durga who was worshiped before and after a war) was housed. This hill was a proud possession of the Chera kings. In no less than half a dozen places in the Sangam text of Pathiṛṛup patthu (பதிற்றுப் பத்து) on Chera kings, this hill and the deity are praised. (In all probability, Kollur Mookhambikai was this deity of Airai in Sangam Age). Kharavela calling himself as bound to "Chetha raja" could refer to his allegiance to Chera kings. The "Airena" refers to his connection to Airai. He was also a Veḷ, as seen from his name Khara – Vela. The ‘Airena’ and ‘Cheta raja’ point to the genetic connection between Kharavela (Kalinga dynasty) and Chera dynasty.

This connection establishes how Adyamān could have been defeated by the Cheran king with the help of Kharavela. Both the victors had got their victory over Adyamān recorded for posterity. The 8th decade of Pathiṛṛup patthu is in praise of Cheran’s victory over Adyamān. The 11th line of Hathigumpha inscription highlights the same victory from Kharavela’s angle. This kind of expression of shared victory is seen in the victory of Cheran Senguttuvan over Yavanas while the same is said for Gautamuputra Satakarni also. The mutual friendship between them and the mutual help expressed in Silappadhikaram between the two make it known that the Cheran army joined the army of Gautamiputra Satakarni in winning the Yavanas though it is not explicitly recorded in any text.

The victory over Adyamān by Kharavela is expressed in 11th line of the Hathigumpha inscription. It says that Kharavela shattered the confederation of Tamira kings that was existence for 1300 years and ploughed their lands with asses to grow "Pithumda"!

Pithunda is Pithu (पितु) + Urundai -  a combination of Sanskrit and Tamil words meaning food balls. The Tamil word Urundai is corrupted as "Undai"  or "Unda" or "mudde" in Kannada. This refers to ragi balls. The Ragi balls made of Millets is a popular food in this part of Tamilnadu even today. This place (Dharmapuri) has been a neglected or abandoned region even since the fall of Adyamān.
Ploughing the lands of the enemy after winning his land is a popular culture in Tamilnadu as per Sangam texts. In the case of severe enmity (which was more to do with the different cult followed by the enemy) – mostly in resistance to Vamachara cult which Tamils did not accept.

This enmity continues till today - without knowing this cause – and is termed as caste clashes with caste Hindus. (This is a different topic which I am not divulging here) After killing the enemy large scale massacres were done, the habitats were set on fire, waterways were poisoned, fertile lands were spoiled and ploughed with asses to grow (Veḷ varagu) millets – {that was consumed in drought years as Ragi balls (Pithunda)}. Even temples were broken.

Karikal Cholan did it; Pandyan Nedunjeɻiyan of Sangam age (Talaiyalanganam) did it. There is inscriptional evidence to show that it happened in the Kongu belt in 12th and 13th centuries CE as this region was settled by migrants ever since 1500 BCE. The last recorded such incident was done by Sundara Pandiyan who was famously known as "Maduraiyai meetta Sundara Pandiyan" (the one who restored Madurai). Madurai Meenakshi temple was in the control of Kali worshippers before his times.  For long, Kali, Kaḷaamukha and Kabalika worship were not accepted in Tamil lands. The list included Jains and  Buddhist and Vamachara also which was followed in Indus region. In the case of enmity with these people, extreme intolerance was shown.

Kharavela’s personal enmity with Adyamān and Veḷir confederation could have come from the difference in the cults they followed. Kharavela is all probability can be said to have followed Vamachara. Vamachara was native to Indus region and the Indus signs seen in Hathigumpha inscription is proof of Kharavela’s Vamachara- leanings. 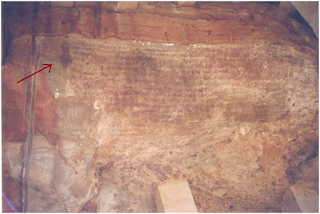 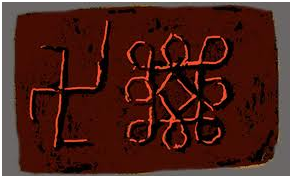 The above discourse is given to show that people called Veḷir- s of the Indus Saraswathi region who had settled in Tamil regions at the end of decline of Indus region met their end 2000 years ago. The high profile migrants such as the ones in west of Tamilnadu (Mysore – Irungovel) were connected with Krishna's lienage (Purananuru 201). The Vels of north Tamilnadu such as Adyamān were connected with Gangetic and Ikshvaku people (Purananuru 99 & 392). Pari of Parambu hills was killed. All these Vels met their end by the end of Sangam age, which has been hailed as breaking the confederation of Tamira kings.

The main player in that defeat was Cheran king Perum Cheral Irumborai assisted by Kharavela. The Tamil dynasties had continued even after that.

The reference to the Pandyan king bringing tributes to Kharavela in the 13th line of the inscription could refer to the subsidiary level to which Pandyans were pushed into, but they were not replaced. The dynasty had continued and perhaps bought peace with Kharavela.

This is not so with Cholas as there is reference to Kalinga country paying tributes to Cholas for centuries in the first millennium of the Common Era. From the text Kalingatthu Barani (கலிங்கத்து பரணி) it is known that Kulotthunga Chola I sent an army to Kalinga to punish them for having failed to pay the dues to the Cholas. The subsidiary state of Kalinga to Cholas could have started from Karikāla times. Karikāla made successful northern expedition upto Himalayas during his reign. There was no resistance on the way. It implies that Kalingas agreed to be subsidiary to them.

In line 4 of Hathigumpha inscriptions, it is said that Kharavela sent his armies to the west ‘disregarding Satakamini’ (Satakarni).

The implication of this line is that he didn’t subjugate Satakarni nor was there a friendship with Satakarni. But he could move his troops through the dominion of Sarakarni without inviting any hostilities. This can happen if there was a third party who was a friend of both or superior to both and ensured passage for Kharavela’s army through Satakarni’s land without trouble. This is being said on the basis of the political equation in this region during Cheran king Senguttuvan’s times. Senguttuvan won Kalinga during his first expedition to North India to do final rites for his father in river Ganga. And Satakarni was a close friend of Cheran king.

But there is no scope to assume that Kharavela was a contemporary of Senguttuvan. The above equation is written to highlight that an understanding was there among the three political powers.

Unrealistic date of Kharavela by Vedveer

The basic feature of Hathigumpha inscription is that the script is Brāhmī, the language is Prākrit, the signs are from Indus and the king at whose behest it was inscribed is believed to be a Jain. Epigraphia Indica (1983:73) says “It is quite possible that the record was composed by a Jaina monk from Gujarat or the Maharashtra...”

Vedveer Arya is also of the opinion that Kharavela was a follower of Jainism. Based on this he interprets Nandaraja in the inscription as the one coming in Jaina chronology and assigns the date 1129 BCE to him and links Kharavela to that time period in his article on the date of Kharavela.
But in the current paper under discussion he says,

“The Hathigumpha inscription clearly indicates that Kharavela re-established the Buddhism in Tamilnadu and gave land grants to Arhats i.e. Buddhists.”

This is not in sync with his earlier version of Kharavela being a Jaina.

In the final analysis his date of historical chronology of ancient Tamilagam is based on his own views on one of the names mentioned in Hathigumpha inscription (Nandaraja) and not on any other historical inputs or others related to the inscription. With absolutely no reference to Kharavela destroying Tamil lands and dynasties found in Tamilnadu and Tamil literature, his sweeping statement on Kharavela annexing Tamil territories is questionable.

Email ThisBlogThis!Share to TwitterShare to FacebookShare to Pinterest
Labels: Historical research, Indology, Through the window of Tamil...