SETHU is sacred for the sub-terranean worlds!

On his return journey from Lanka

the places associated with their life and travel.

( we rely on Valmiki Ramayanam only,

for any discussion on or interpretation in Ramayana,

for, it was written at the time of Rama and narrated to him by his sons.

If any information contrary to truth was in that,

it would have been corrected by Rama himself.

“This sacred place of pilgrimage (theertham) of the mighty ocean is seen.

Known as Sethu bhandam, this is worshipped by the three worlds.”

The three worlds are not just about the worlds.

They also include the beings of the three worlds.

(1) The beings of the nether-worlds or sub-terranean worlds,

that are found in 7 layers below the surface of the earth,

(3) The departed people who are said to live in the layers above the earth or in heaven.

The sub-terranean lands (mentioned earlier in this series)

stretch till the mantle which is known as Paatala, the 7th layer.

The description in Valmiki Ramayana is that the Sagaras dug

till the 6th layer called, Rasaatala.

This layer acts as a cover to the Paatala and prevents

its beings ( the molten materials) from gushing out.

That was why the Sagaras did not go deeper than that.

making it fit enough to be worshipped by the beings of the worlds under.

How this protection is happening at Sethu?

The Mainaka mountain on the way of Sethu is not just a mountain.

From the dialogue is has with Hanuman we know that it is something else.

When Hanuman was flying over the sea,

the Mainaka mountain grew up and obstructed his way.

This is indicative of a volcanic growth from under the sea

when Hanuman was crossing.

that it was once like the many other mountains

that were beaten, broken and thrown by Indra’s vajraayudha.

As a result, mountains like him were flying in those days.

But fortunately for Mainaka, the wind god, (father of Hanuman)

brought him there at that ocean.

He settled on a vault or opening of the Paatala loka,

from escaping and ruining the world.

Other puranic texts also tell that in olden days

the mountains were broken and strewn all over by Indra.

The allusion is this.

In the very early times of earth’s evolution,

There were explosions on the surface

due to disturbances in the mantle

which fractured the top layer of the earth.

Mainaka seems to be one such mass of earth

that was carried by wind and relocated at the bottom of the sea at Sethu.

The crucial information that Mainaka gave was that

it was sitting on an opening and

thereby preventing the beings of Paatala from coming out.

or on the ocean bed at this location.

That the Mainaka grew up in size when Hanuman was crossing,

is indicative of some molten material gushing through it at that time.

This is an indication of some sub-terranean

activity at this location.

and the ocean bed at this location must be probed

for any volcanic material,

by experts in this field before disturbing this location.

Another information to be recalled here is that

this stretch of Sethu seems to lie on a junction of sub-terranean plates.

The trails of Sagaras strengthen this assumption.

and dug up to the north of the present day Srilanka.

There they encountered the southern Directional elephant called Maha padma.

So they just went around that Mahapadma and then went westwards.

The went up to the southern land of Tamilnadu

where the Kumari was present.

They could not proceed further west,

because that was another tectonic plate.

So they turned northwards.

That means they were digging in between Srilanka and India

and located kapila’s Ashrama and the lost horse at the north east.

This location tallies with Rameshwaram.

when they were digging southward.

It seems Srilanka is on a small and extended bit of the southern plate.

connecting and Srilanka by means of Sethu. 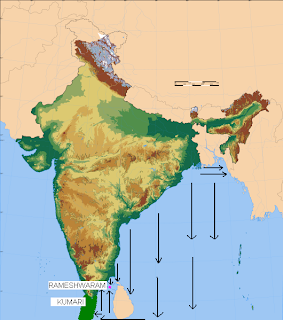 (The trail of the Sagaras.

First towards east, then south,

then west, towards Kumari

and then north in between India and Srilanka.

It ended up at Rameshwaram, at the north east in their trail.)

Thus there is every possibility to conclude that Sethu stands

on the junction of two tectonic plates.

This must probed by experts in this field before disturbing this area.

Another strong rationale can be made out from the incidents in Ramyana itself,

for not to disturb this now sleeping but potentially dangerous zone

When Hanuman was crossing the ocean,

the Ocean god himself sprang up and directed Mainaka mountain

to play host to Hanuman who could have been tired of flying.

The reason he gave was that

since the very ocean was created by Rama’s ancestors,

it would be in the fitness of things

to help Hanuman in Rama-kaaryam

(in his mission to serve Rama)

as a gesture of thanks-giving (for their existence).

But the same ocean-god did not show up at all

– on his own and until Rama threatened to dry him up,

Does this not look odd?

There must be some rationale behind this behaviour of the ocean god.

In the earlier instance, some volcanic activity happened,

in the growing up of Mainaka.

Within a few days after that,

Rama wanted that place to part with water and show up as a low-watered area,

so that he and his army would be able to cross the ocean.

If this plan of Rama were to materialize,

it would mean that an intense sub-terranean activity must happen

throwing up the beings of Paatala (lava) to the ocean surface,

so that the ocean floor would swell up and waters would be receded on both sides.

If this location is as explained above (as a junction of tectonic plates),

such a sub-terranean activity would prove to be dangerous and uncontrollable too.

Knowing this kind of repercussion,

the ocean god could not carry out this wish of Rama,

though he was keen on doing his part (and later did his) in Rama-kaaryam.

But when Rama rose to thrash that location with his Brahmasthra,

and prevent Rama from doing that.

Note that even Rama did not disturb this part of the sea.

His asthra landed at a place in the north of the ocean, as requested by the ocean god.

It resulted in the breaking of the sub-terrain there

and release of a sweet water spring.

While some say that this happened in the desert of Thar,

there is another version

which is called as Dhanush koTi.

There is a similar incidence to the one like Rama’s

( refraining him from attacking the stretch at Sethu)

that is reported in ancient Tamil works.

The Land of Pandyas stretched further South, and was present in the land of Kumari.

The olden Then-madurai, the capital of Pandyas was there.

Once the ocean of the South surged towards the Pandyan land.

and burnt the sea.

As a result, the waters could not swell and stopped at his feet.

This feat made him known as “Kadal vadimbalam nindra Pandyan”.

But in the surge of the sea, some lands that had the river Kumari running, were lost .

The story (which is real) did not stop here.

But this land also was submerged later by the surging ocean.

in an act of ‘revenge’

on the Pandyan who burnt it.

Two information can be had from these events.

One is that if it was possible for a Pandyan king

to diffuse the power of a surging ocean,

to burn the sea or

build a bridge on the sea!!

the Elements of Nature behave,

will be met with a much fiercer rebuttal from that element!

This is precisely, what the ocean god told Rama.

It is the nature of the sea to roam around with water.

Such waters can not be parted.

If an effort is made to part the waters

(by weapons like Rama wanted to do initially and the Pandyan king actually did),

that would give rise to uncontrollable repercussions.

than to split the ocean or dry up an area of it.

are indicative of the need to strengthen this area with a better covering or binding.

On the request of the ocean god,

this location was bound well right from the

bottom of the ocean to its surface,

covering 5 layers of the under-world.

This binding stands on the junction of the tectonic plates.

The beings of the Paatala are prevented from coming out.

The beings at the underwaters in this region are protected from loss of habitation.

The sub-terranean structure is free from danger – unless otherwise disturbed.

That is why the Sethu bhanda

is fit enough to be worshipped by the under worlds too.

why the next layer – the layer bearing the humans

worship this as ‘theertham’ (sacred place)

Very Good Blog, full of intriguing details in a charming style of narrative.

I have a few friendly suggestions.

1. Kindly consider being more specific in the references. e.g. when you quote Sri Valmiki Ramayana, kindly point out the Kanda, Sarga, and Shloka #. Likewise when you referred to Pandyan King's feat of 'burning' the ocean. It would be immensely helpful if you could point out which particular text is this, who is the author and when was it written etc. Such details would enhance the schiolarly value immensely, and also other like minded researchers can benefit.

2. Kindly consider giving a separate and distinct title to every new sub topic. "No Aryan - Dravidian divide - it was one Aryavartha" followed by a number is a bit less reader-friendly. Please do append it with a specific verbal topic name.

Your suggestions have been noted.

(4) Villi Bharatham by Perum dEvanaar(18th verse in the chapter on the 15th day of war).

Regarding your second suggestion, I am giving a separate title about the subject to be discussed in that post, just below the Main title.
Let me see how it can be done better.