Some thoughts on Agni nakshathra

The Agni nakshathra starts on 4th May this year
and ends on 28th May. 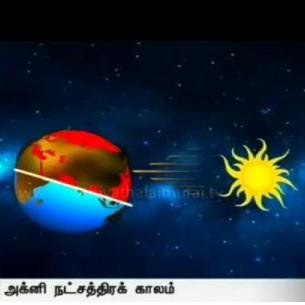 As per astrology, Agni nakshatra
is the time when the sun moves
through the 7 paadas (paada = ¼ of the star) starting from
Bharani 3rd paada to Rohini 1st paada..

These are Bharani 3rd & 4th paadas,
all the 4 paadas of Kritthika and
Rohini 1st paada.

Agni nakshathra is also known as “katthiri” in Tamil.
This is adopted from ‘Kartaari’ in sankrit
which means being hemmed in between.

This period is the hottest period of summer and
is also considered as unsuitable for conducting many auspicious events,
thereby making this a period of ‘agni nakshathra dosha’.
This write-up is to present some information on these issues.

Agni nakshathra is so called
because it is the time the sun crosses Krittika.
The star krittika is known as agni nakshatra in
"Utthara KAlAmrutham” and in other texts of astrology.


Krittika is associated with heat and agni.
The ati-devatha of this star is Agni.
The Lord of the star Krittika is Sun,
which is at its exalted level at Aries
where the head of Krittika is situated.

The Lord of the house where the star begins is Mars, the planet for fire.

The sojourn of Sun in this fiery star also coincides with maximum heat
experienced in the Northern hemisphere.

But the trail of heat starts even from Bharani 3rd paada onwards.
Generally these 2 stars, namely, Bharani and krittika
are considered as dreadful stars.
It is common to hear the elders say
that one should not do anything on the days ruled by these two stars.
Let us see what is so dreadful about these 2 stars.


Bharani and krittika are not alone, but they are part of 12 stars
(others being
Arudra,
ashlesha (aayilyam),
Purva phalguni (pooram),
Purvashada (pooradam),
Purva bhadrapada (poorattadhi),
Jyeshta (kettai),
vishaka,
swathi,
magam and
Chithra)
that are considered as
'unfortunate' (aaghadha nakshathras) stars.


The rationale given in astrological texts is that
whatever is given on the day these stars reign, will not come back.

Particularly, if one lends money to someone on this day,
he / she wont get it back.

If one goes on a journey on these days, it is unlikely
that he/she will come back without problems –
means he/she may get into accidents etc.


If one falls sick on the day of these stars,
it is unlikely he/ she bounces back to previous condition of health.

This is explained in a saying in Tamil like this,

But there is a twist to this.
This also implies that one can take money or borrow money from others.
The conditions will arise such that one need not have to return the money:-)

It also implies that if one loses money in pick-pocketing or burglary,
there are no chances of getting back the lost things.

But of all the 12 stars mentioned above,
bharani and krittikai are strictly meant for losing whatever is given,
while the other stars are
suitable for other specific occasions also.

Bahrani and krittika are specifically followed when one has to give
away something once for ever, say, in harvesting,
where the plant cut
is not going to be rejuvenated.

These stars are good for shedding illness,
like taking the first bath after an illness.

Other than losing what one gives,
there need not be any dread about
bahrani and krittika.

Perhaps this is also the reason (pOnaal varaadhu)
why auspicious events are not done when sun passes through these stars.
We undertake auspicious actions, expecting some goodness in return.
Such actions do not fructify during this agni nakshathra period.

In contrast to the firey agni nakshtra period, this period is a cool
'deepam' period.
(But this will be the hottest period in the southern hemisphere)

When the sun enters vishaka -1 in Ippasi, this is in direct opposition
to the exaltation, and coincides with the 180 degree distance from
Bharani -3.

The 6th day counted from this is shashti - the soora samhara day.

If the agni nakshtram stands for the hot conditions that preceded and
prevailed at the time of creation (cosmic level),
the opposite period
stands for destruction of enemies at the mundane level.

On shashti, the sun has moved 2 paadas more and will be in Mithuna (Gemini)
(where arudra, signifying destruction, predominates) in navamsa -
directly opposite to dhanus where shashti falls.

Thus for destruction of enemies, the sun, mars, vishaka & krittika
combination is required.

The sword has krittika as nakshatra,
Rohini as gotra,
Agni as the deity and
Rudra as the Maharishi.
Thus the travel of the sun in the agni nakshthra
signifies destruction.


Many schools of thought have sprung up based on diverse
interpretations, each based on some logic.

One is that the agni nakshthra dosha kaalam is for 21 days.
(There is difference between agni nakshathra and agni nakshthra dosham.)
This is widely accepted concept.
This is based on the premise that the effect of any planetary movement
starts one paadam before it actually enters a star
and ends1 paadam after its tail end.

In the case of agni nakshathra dosham calculation,
the similar rule is applied.
The addition of 1 paadam before and after krittika is done.
This comes to 21 days.
So as per Utthatra kaalamrutham the dosham is for 21 days only.

The vakhya panchanga writers have developed their scheme
with this 21- day duration as the basis and
added further 1 paada before and after this period.
That is why they have approximately 28-day duration
for agni nakshathra.
Actually this must be read as agni nakshathra dosham period.

Another school of thought that is followed
by non- vakhya panchangam writers is to
start from Bahrani-3 and till Rohini 1.
The Rashtriya panchanga and all drik ganitha panchanga
follow this rule.

Rohini being a sthira nakshathra
which is the first rate benefic for auspicious sthira kaaryams,
there is no need to bring it to dosham period beyond the justifiable limit.
So most schools do not accept to bring Rohini-2 within dosham period.


Now what is this dosham mentioned in texts?

Texts say that works on soil, wood and stone are to be discouraged during this time.

"mrut, daru, sila karmaani varjayet" says text.
The rationale is understandable.
The intense heat would cause changes
in the nature of soil, wood and stones.

That is why Kumbhabhishekams and
manai muhoortham are not done in this period.

But no exclusive reference in texts
on a bar on marriages and other auspicious functions.
But it has been a practice not to have
marriages or auspicious events in this period.
The reason is obvious.

In those days when technology was not there to reduce the impact of heat,
people avoided this period for social functions such as marriage.
But in today’s world, this dosham has no relevance for marriages.


If one looks at all the issues of dosham while fixing muhurtham,
there are hardly 5 days available in a year.
Therefore it is advised ( in Kaala vidhanam)
to choose the day with positives over-weighing negatives.
For each event, there will be one or two issues of prime importance.
Those issues should not be compromised.

For instance for vivaha muhurtha,
the tara balam of the bride and the groom
are of prime importance at personal level
whereas the absence of guru-shukra moodam is necessary
at the cosmic level.

If these 2 are there,
other issues such as
agni nakshathra or mala maasam / adhika maaasam
can be ignored.

Ofcourse, muhurtha lagna shuddhi and
Shuddhi of the 8th house should be there.
Thus exceptions and adherence to basic rules co-exist
and a judicious balance must be arrived at.

Thanks for the definition of Agni Nakshatra. I calculated the start and end dates astronomically according to the position of the Sun as per the Swiss Ephimeris 2012. My calculations tally exactly with the dates you mention. Thanks.

Your inputs were useful for my blog post: Agni Nakshatra

We had to postpone our daughters tonsure and ear pierce ceremony from April 30 to may 7 due to unavoidable sudden situation at my house.However am worried as some people say its Katri and not to perform such event. Is it okay to do this now. If i postpone further we can perform only after 1 and a half years and by then my elder daughter would be in her fifth year.please suggest.