Ramanuja and his preaching in the course of planning the story

and depictions in the movie, Dasavatharam.

The idol of Govindaraja perumal is a striking resemblance of Melkote uthsavar,

The resemblance is complete with the height and looks of Perumal

and also his crown, which is a diamond-studded one

and worn only on the occasion of Garudasevai in Panguni,

Another resemblance is that this perumal at Melkote

has a history of changing hands and finally coming back to the place where he belongs.

Dasavatharam perumal also had such an adventurous trip.

in full view in the net.

and the one painted by me long ago.

This perumal with this majestic crown looks beautiful

that it was love at first sight for me when I saw the photo of this perumal.

I made a water-colour painting of this perumal

and waited for the day to see him in person at Melkote.

Nowadays this Perumal is one whom I regularly visit. 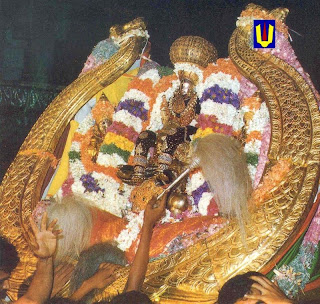 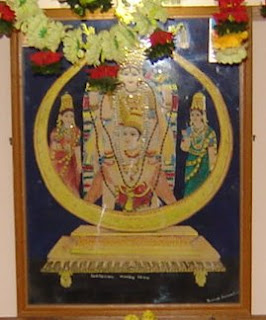 (Look at the crown)

The visit has another intention too.

This one is about the other personality in Melkote from whom I have benefited a lot.

He is none other than Acharya Ramanuja who is seated in upadesa- kolam.

Ramanuja stayed in Melkote during his self-imposed exile

to escape the wrath of the Cholan king.

On every visit to Melkote,

and replies will occur to me in Ramanuja’s sannidhi.

(One such reply was on Vali vadam of Ramayana which I have written in this blog.

Another one was about whether we have free will

or everything is predetermined.

The reply I assimilated in Ramanuja’s presence will be posted later.)

After noticing the connections in Dasavatharam film,

I started wondering whether Kamal had been to Melkote

and been held by the spell of Ramanuja and Chella pillai.

the narrow thiruman of Melkote moolavar.

The two padam must cut through the eye brows and then join on the nose.

Stopping it above the eye brows - which many people do, is not the right way. 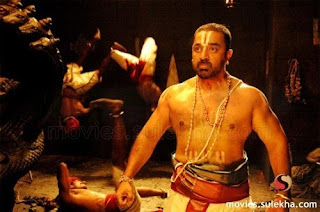 Posted by Dr Jayasree Saranathan at 10:24 AM

Well done for this wonderful blog.