From Ravana to Hiranya kasipu – what happened at Kumbakonam?


The following news item, if true, is a true cause of concern.

The EO of the Ramaswami has been transferred

in a spiritual discourse at the temple

on how Dasaratha was ready

to give up the reign and make way for his son.

It is a practice to draw allusions to contemporary issues

and none other than Mr Karunanidhi is well known for making such allusions.

Any discourse on Ramayana can not skirt on governance

and the governing leaders,

One example is the advice of Rama to Bharatha

on good governance is a celebrated chapter on governance.

The said reference in the discourse is not new, nor blasphemous.

I somehow feel sorry for Stalin, for,

no one seems to think kindly of him for the ‘wait’ he has to do.

Notable incidence is the rift with Maran brothers

for their veiled support of Stalin to the throne (Dinakaram issue).

make us wonder whether

there is Hiranyan’s rule running in this state.

It seems all will be well if we say

Not long ago Karunanidhi did a Ravana

He even went one step more by denying that Rama ever lived.

Ironically both Ravana and Karunanidhi did not realize the supremacy of Rama,

in His feats of constructing Sethu,

slaying of Karan and Vali

and even in his messenger Hanuman in flying over the ocean and burning Lanka.

(These 3 were mentioned by Ravana’s wife, Mandodhari

in counseling Ravana to send back Sita to Rama,

to show that Rama was not just a man but a God.)

With all the opposition to Sethu project from all accounts,

Karunanidhi finds it difficult to accept

that Sethu is indeed a wonder that can not be and should not be touched.

But the present episode on the discourse issue

makes it seem that he is out to make himself

be regarded as the supreme one,

Hiranya Kasipu insisted that everyone must glorify him only

and went to the extent of harming his own son,

when he refused to say “Hiranyaya namah:”

From the present episode

it seems that only

‘KarunanidhayE namah:’ will save one,

even if one were to support his son.

What a transformation from Ravana to Hiranyan

for one who projects himself as a hater

of epics and puranas or

anything of the culture of this great Bharath varsha.!

Thankfully, we are in a democracy, not in monarchy

and any allusions to ‘son’s rise’

can not happen as a matter of inheritance.

Rama could not ascend the throne

inspite of the wishes of the people,

who were waiting for the aging father to step down.

the son’s rise is not in the wish list of the people.

That it is not in the agenda of the father too,

is made known from the episode at Kumabakonam temple.

On a different note,

it is irony of sorts that the EO has been transferred to Sri Vanchiyam temple,

known for propitiatory effects for curses of sorts.

Yama dharma raja who is known for giving justice,

is seated in this kshethram.

He will render justice to the EO!

He will render justice to all!

Thanjavur July 30: The executive officer (EO) of the famous Ramaswami temple in Kumbakonam, popularly known as `Ayodhya of South India’, has been transferred after a VHP speaker took potshots at chief minister M Karunanidhi for clinging to power, during a spiritual discourse on the Ramayana at the temple.

“Dasaratha gave up power and handed it over to his son in the larger interests of the public. But, some people even at the age of 80-85 still want to cling to power and are reluctant to make way for youngsters,” remarked R B.V.S. Manian, state organiser of the Vishwa Hindu Parishad (VHP), during his discourse on `Lord Rama’s coronation’ at the temple premises on Monday night.

DMK functionaries, who learnt about the veiled attack on their leader, brought the matter to the notice of HR and CE officers and wanted to know how the temple premises could be used for political attacks under the guise of religious discourses. After a quick enquiry, the temple’s executive officer, P. Mohandass, was transferred to Sri Vanchinathar temple at Srivanchiyam in Tiruvarur district. The temple authorities also denied permission to the organisers to continue the 15-day spiritual discourse at the temple mandapam from Tuesday compelling them to shift to the Veera Saiva mutt near the Mahamaham tank.

The assistant commissioner of HR&CE, Mr P. Subramaniam, however, denied that the discourse had sparked off the transfer. “The transfer was a routine one. In fact, he had voluntarily sought it three months ago but could not be transferred as no replacement was available then, “ Subramanian told this newspaper. The official also explained that organisers were asked to shift the venue only due to increased security in temple following the recent bomb blasts and not due to any controversial comments made by the speaker. 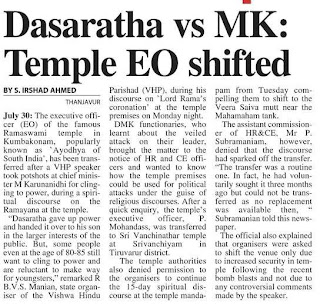