When everyone had been thinking that the UPA government had won

the confidence – motion by votes and ‘notes’,

our Prime minister has come out with a different explanation.

In trying to ridicule Mr Advani for his failed attempts to topple the government,

Mr Manmohan singh has conceded that

it was the astrology of the day and time that made him win.

I urge him at least to change his astrologers

so that he gets more accurate predictions of things to come.” 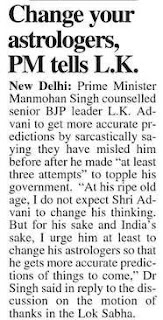 This means the PM has consulted astrologers to know the outcome

and this gives rise to the thought that

he could have even taken advice from the astrologers on the time to table the motion.

Generally the Congress people are known to depend on astrology

The choice of the day also make me think that

the UPA had gone with some astrological counseling.

Contrary to popular belief on inauspiciousness of Tuesday and Chathurthi,

the UPA had chosenthat day for voting on the motion.

the advantage of that day.

The rule of astrology is that

initiating a war or law suit on this vara-thithi combination is good for winning.

The timing of tabling also happened at a time

But destiny will have its final say, Mr Manmohan Singh.

Mr Singh might have had the choice over the time of tabling the motion.

But the voting was taken to a time that destiny decided!

Voting was done at a time of ‘dagdha thithi’

which ensures that whatever is done at that time will die away!

The UPA won the vote but the what it won will not last long.

It will be beset with untold problems.

The people and the nation too will have to face untold misery.

When the voting was taking place,

Panchami thithi was in place.

Panchami on a Tuesday forms the Dhagdha thithi.

happening in them are as follows.

will ensure that things done on these days-thithi combined

will not last long.)

The eclipses occurring in the coming days

The current Sarvadhari year is going to witness 2 continuous eclipses

at 2 times happening at the beginning of the 2 ayanas.

are likely to affect in particular.

and the 3 eclipses are happening either in conjunction with

or in opposition to Capricorn-

The first two will take place in the presently running

and all will not be well in foreign relations – or even with the nuclear deal.

Fear of water will also be there.

Water ways would not prove good for the people.

I am afraid the government will make fresh attempts

to rupture Ram sethu too in this period.

Milk production will slump further and price-rise will be unrelenting.

The lunar eclipse of 16th August will have an impact on earthy factors.

Anything from earth quakes to

a slump in mining industry, to loss of crops can be expected.

The Saturn in 8th already indicate these troubles for Indians.

A sharp rise in these will be again witnessed due to the eclipses.


The solar eclipse of 26th January will not be seen in Mumbai and .

But it will be seen in Tamil nadu.

Since it is occurring at Capricorn again,

things will not be good for then.

I guess, Mr Karunanidhi will be at his worst- best at that time,

For, he will be trying to impose ‘his’ new year then,

and interfering in temple activities.

For the mistake of having chosen him,

the people will be paying back in the form of Nature’s fury.

Then what is the remedy?

When rulers commit mistakes, let people rise to save themselves.

Remembering ancestors and devathas will help those who do obeisance to them.

Posted by Dr Jayasree Saranathan at 9:58 AM

Possible. All politicians consult astrologers. But presently MMS is running a bad dasa-bhkthi.