Textual evidence on Kapaleeshwarar temple at SEA-SHORE of Mylapore.

The Kapaleeshwarar temple visited by

and sung by them in immortal verses

had stood in the sea-shore - not at the inland.

Read the article below.

Fraudulent myth of the tomb of St Thomas - II

In November 2006 Pope Benedict XVI had categorically stated that St.Thomas never visited . When Catholic Indian Missionaries want to manufacture false and fictitious fables to deliberately mislead the poor and gullible masses of for purposes of mass conversion (known as `harvesting of souls'), then they are capable of treating even the Pope in with supreme political contempt! The mega budget film on St.Thomas to be produced by Catholic Archdiocese of Chennai should be viewed against this background.

Historian Veda Prakash, after conducting a methodical research published a book in Tamil in 1989. In this book, he called the bluff of St. Thomas—a bluff marketed by the Catholic Church and its missionaries in India since the middle of the 16th century—and convincingly proved with irrefutable documentary evidence that the present Santhome Church, has been built on the very site where the original Kapaleeshwarar Temple of Mylapore stood for centuries till 1560's. Sometime after 1560, the Portuguese destroyed the on the beach at San Thome and built a church. 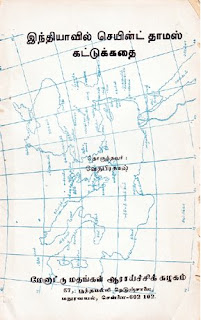 Veda Prakash's statement about destruction of the original by Christians was confirmed by Dr. R. Nagaswamy, formerly Director of Archealogy Tamilnadu. In an article `Testimony to Religious Ethos', published in `The Hindu' of , he wrote: `A great study of the monuments and lithic records in reveals a great destruction caused by the Portuguese to Hindu Temples in the 16 century A.D. The most important lost its ancient building during the Portuguese devastation and was originally located near the San Thome Cathedral. A few Chola records found in the San Thome Cathedral and Bishop's house refer to and Poompaavai. A Chola record in fragment found on the east wall of the San Thome Cathedral refers to the image of Lord Nataraja of the . The temple was moved to the present location in the 16 century and was probably built by one Mallappa…. A fragmentary inscription, 12 century Chola record, in the San Thome Church region refers to a Jain Temple dedicated to Naminathaswamy'.

The point of view of Veda Prakash on the spurious and dubious visit of St.Thomas to Mylapore was later confirmed and established with formidable documentary and literary evidence by Swami Devananda Saraswathi (pen name: Ishwar Sharan) in his book titled `The Myth of Saint Thomas and the Mylapore Shiva Temple' published in 1991. Ishwar Sharan has demolished the fabled, fabricated and fraudulent myth of the visit of St.Thomas to Mylapore in the first century AD and his murder and martyrdom in 73 AD. My current story is wholly based on the facts presented by Ishwar Sharan.

The legend of St.Thomas in is clearly the fabrication of the Portuguese to camouflage their destruction of the ancient Hindu Shiva Temple of Kapaleeswarar in 1561, which was situated on the seashore, at the very place where the San Thome Church now stands.

Nearly 1000 years before the barbarous and savage Catholic Portuguese

Thirugnanasambandar wrote in a moving manner:

`The Lord of Kapaleeswaram sat watching the people of Mylapore—

taking ceremonial bath in the sea on the full moon day of the month of Masi'.

I am presenting below another beautiful verse of Thirugnanasambandar relating to Kapaleeshwarar Temple:

In the same strain sang yet another great

who visited the Kapaleeswarar Temple in San Thome in 1456,

The above verse of Arunagirinathar can be translated into English thus:

`Oh Lord of Mylai (Mylapore) Temple, situated on the shores of the sea

The ancient Kapaleeswarar Temple at San Thome visited by Thirugyanasambandar in 6th century AD and Arunagirinathar in 1456 was destroyed by the Catholic Portuguese in 1561 to cleverly cover up this act of crime, the Catholic Church has come up with the fraudulent fable of Martyrdom of St. Thomas at Mylapore in 73 AD. The Portuguese domination of Mylapore lasted from 1522 to 1697, by which time the British had established themselves in the Fort St. George and adjoining territories and the Portuguese had to withdraw to Goa where their Empire lasted in 1962.

As Swami Tapasyananda has observed `In Goa Portuguese rule was noted for a spree of destruction of Hindu Temples and persecution of the Goanese, so much so that large sections of them had to flee that territory and settle all along the west coast of India. They are the Gauda Sarawats. The fate of these Goanese would have overtaken the Temples and the people of Madras also, a foretaste of which contingency they got in the destruction of the holy Kapaleeshwara Temple.

Thanks to the British domination of the region after 1697 and the consequent elimination of the Portuguese, this tragic fate did not overtake them. The British had more political maturity and diplomatic perception, which helped them perceive that trade was more important for themselves than religious propaganda'. No wonder that the British kept an attitude of indifference towards the religion and religious edifices of the people of India in whose midst they carried on the trading activities which eventually led to the establishment of a great political empire not only in India but in other parts of the World.

Sita ram Goel in his outstanding book titled `HISTORY OF HINDU-CHRISTIAN ENCOUNTERS (AD 304 TO AD 1996)' has given his magisterial verdict:

`The history of Christianity, crowded as it is with crimes of the most horrendous kind, provides a running commentary on the Christian doctrine. And the biggest share in Christian crimes down the centuries can safely be allotted to the Roman Catholic Church, its head, its hierarchy, its theologians, its religious orders and its missionaries. There is, however, one criminal field in which the Roman Catholic Church has remained unrivalled. No other Christian denomination—there are as many as 23000 of them _comes anywhere near the Roman Catholic Church when it concerns committing of blatant forgeries and foisting of pious frauds. It is no exaggeration to say that starting with Jesus Christ, the entire doctrinal and institutional edifice of Catholicism rests on a series of staggering swindles. The Roman Catholic Church in India has remained true to this tradition. The literature it has produced during the last five centuries is full of lies of the filthiest sort, not only about Hindu religion and culture but also about its own `religion' and role. And this garbage heap is topped by the hoax about the so-called St Thomas'.

After our Independence, the Catholic Church went on spreading the myth of murder and martyrdom of St. Thomas at Mylapore in the first century A.D. Meanwhile, the Liberation Theology of the Church had added a new dimension to it. St. Thomas started being sold not only as the first founder of Christianity in India but also as the first to proclaim a new social message in this country.

A section of the `secular' media in Madras, in the late eighties, presented this new portrait of St. Thomas through articles written by one C A Simon under the title `In Memory Of a Slain Saint'. After repeating the same old standard fraudulent story of the Catholic Church in India, C A. Simon struck a new revolutionary note: `St. Thomas spent the last part of his life in Madras preaching the Gospel. A large number of people listened and embraced the way of life preached by him. The oppressed and downtrodden followed him and claimed equal status in society as it was denied to them by the prevailing social norms. He condemned untouchability and attempted to restore equal status to women'.

This bold and brazen Christian scribe had written with great confidence because similar fictitious stuff, presented in a plethora of books as well as in the popular press, had passed off without being challenged. He was not aware that formidable Hindu Scholars had started examining Christian claims about Christian doctrines and Christian saints, as also calculated Christian calumny about Hinduism, Hindu society, Hindu culture and Hindu history.

It is very unfortunate that certain editors of the pseudo-secular media allowed their respected columns to be used to promote this Catholic romance as historical fact in this age of excellent and critical scholarship. Though Veda Prakash had sent his book on the myth of St Thomas to the media as early as in September 1989 for review, yet the media had ignored it. The media did not apply the same standard of censorship to C A Simon. While it treated Simon with respect, it treated Veda Prakash with utmost contempt. The anti-national and anti-Hindu pseudo-secular mafia of print and electronic mass media is being closely watched by the awakened Hindus of India today. Hindus of India are determined to win their war against the planned, organized and launched dissemination of disinformation in regard to Sanatana Dharma, Hindus, Hinduism, Hindu culture and Hindu society by the criminal cabal controlling the print and electronic media in India today.

(The writer is a retired IAS officer) e-mail the writer at vsundaram@newstodaynet.com

IT IS VERY TRUE . Most christians themselves do not believe that st thomas visited India.
Some Kerala christians claim that he visited cranganore and later on proceeded to Madras via footpath. He had raised many from dead. If so why he could not raise himself from death when he was supposedly martyred by a Hindu king. The Bible Thomas was only a fisherman.A fisherman knowing the depths of philosophy is hard to believe.

facts must be enlightened not false stories.