Kaarthigai – the month of lamps.

A consolidated article of all the three articles on Kaarthigai Deepam can be read and downloaded as scribd document. Read the link at


The solar month of Kaarthigai is to begin in a few hours.

Lighting lamps during twilight hours on all days of

the solar month of Kaarthigai

is an age-old practice. 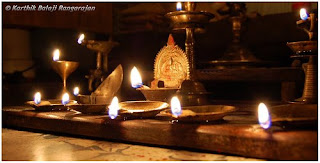 The special occasion is the full moon day in Kaarthigai

when all houses and temples will be decorated with oil lamps after sunset.

This is considered solely as a Tamil festival, as it is not celebrated in other parts of .

This post analyses the various aspects of this festival –

First of all, a clarification on the difference between

and lighting lamps on Kaarthigai pournami.

But the intricate difference is that, lighting lamps on Deepavali

is to celebrate a historical event of the death of Narakasura

while that of the Kaarthigai is a kind of worship on a cosmically important day.

According to the astrological text, Kalaprakasika,

kaarthgai deepam is celebrated on the Full moon day of the solar month of kaarthgai.

The Full moon is the fundamental signifactor.

The star krittika may or may not be present.

But the deepam must be lighted on the Full moon.

If the full moon continues in the next evening, the deepam must be lit then.

Even if there is a lunar eclipse, the deepam must be lit.

This festival ensures prosperity and good rains to the country.

The lighting time must coincide with exact sun set or just before sunset or at twilight.

The twilight is defined as the time when sun will be within 18 degrees below the horizon.

It takes 4 minutes to cross a degree.

That means twilight stretches for 1 hour and 12 minutes after sunset.

It is within this time the Kaarthigai deepam is lit.

The details of how this festival is to be celebrated

is given in this link from Kalaprakasika.

Why the month Kaarthigai?

Lighting lamps is an everyday practice as a part of worship.

But why this month of Kaarthigai has been specifically chosen is a question.

If we look into the details connected with this month,

we will know the cosmological and historical significance of this month.

in the northern hemisphere.

Kaarthigai is the time of peak summer in the southern hemisphere.

What we call as Agni nakshathra days in the North

is experienced in the south during this month.

The agni nakshathra days are too hot for conducting mundane affairs.

But this Kaarthigai month is cold – devoid of solar strength.

So generate heat at that time.

A gentle but a steady and pleasant heating is done during this month.

Kaarthigai is the month when the lunar strength is also at his lowest.

It is the month when the moon reaches its debility.

is a low-spirited time for the lunar power.

If the lord of the month – Mars signifying Lord Muruga

who was born in the star krittika of warrior tendencies is well placed,

the mental faculties as signified by the moon can be of appreciable nature.

That is how, here comes the connection of Lord Muruga!

Muruga’s birth is for destroying demons and

demons are the ones who inhabited the southern hemisphere according to puranas.

are connected with slaying of some asura –

be it about Mahishasura or Narakasura or Soorapadma.

Krittika has Agni as its Lord.

It is generally not advised to do any auspicious thing on the day of Krittika.

It is because its Lord Agni will eat them up (swaaha).

Kritikka is the Lord of sword – one of the deadly weapons.

The sword has krittika as nakshatra,

Agni as the deity and

Rudra as the Maharishi.

Lord Muruga born in such a krittika

of the nature of the Celestial Commander in chief that

he stands for destruction of demonic forces. 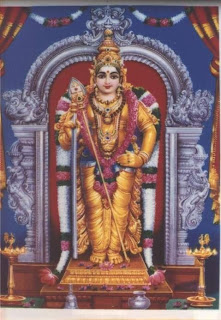 at the peak time of Sun over there!

That was in the month of Kaarthigai.

This festival as an important one for the Tamils may perhaps

One is that huge mass of Kumari of the Pandyans

was in the southern hemisphere, lakhs of years ago

and it is probable that the inhabitants (Tamils)

were frequently troubled by the demons from deep south.

Muruga saved them from the demons and hence came to be glorified by them.

The other factor may be about the connection with

Meenakshi – Sundareswarar whose descendants came to rule the Kuamri land

with the divine help of Shiva – the son-in-law of the land.

Further back into antiquity, it is possible to relate the inhabitants of that land

to the subjects of Daksha-prajapathi whose daughter married Lord Shiva.

during different incarnations and

that is how Shiva became the torch bearer for the dynasty

of the southern lands of Tamils (Thennavar).

There is even an opinion among scholars that

the people of ‘Then-pulam’ (departed ancestors ) mentioned by Thiru valluvar

was about remembering the ancestors of a by-gone era

who were located in the Southern hemisphere!

it is probable that the Kaarthigai festival became a special one for Tamils.

Now about the association with Vishnu.

Kaarthigai deepam is known as the Vishnu deepam and

it is an equally important occasion at Vaishnavite houses and temples.

It is because the Full moon of Kaarthigai denotes Vishnu paadam!

If the Vishnu-paadam in the North signifying Vishu corresponds to the Vernal equinox,

the Vishnu deepam corresponds to the Autumnal equinox in the South (hemisphere).

Autumnal equinoctial point is Lord Thrivikrama’s sthithi (where he stood)

and also the third foot on pressing him down to the underworld.

This can be understood from the explanation found in Surya siddhantha.

Surya Siddhantha explains the sojourn of the sun

The sign of Capricorn (Makar) at the start of Uttarayana denotes

the first step of Lord Thrivikrama –him measuring the bhoo-loka.

The second step is the loftiest one pointing to Heavens at Vernal equinox (vishuvat).

The third step must be brought down to his sthithi,

but placed on pressing him down to underworld

which is the plane below the southern equinoctial location.

In vedic parlance North / uttar is about the plane above our plane of existence.

South / Dakshin means the plane below our plane of existence.

The directions as such are understood in this way only.

The first step at Uttarayana.

The third step at Autumnal equinox!

With that the asura (Mahabali) is vanquished.

This is remembered as ‘Sokka –p-paanai’ or bonfire

lit on the Kaarthigai deepam day in the Vishnu temples.

Finally why the name Kaarthigai

when then Kaarthigai star is not there in that constellation?

in which Full moon happens in that month.

All the lunar months have been named in that way.

The solar months were names based on the Rasi (constellation)

The Tamils used the solar way only.

This can be substantiated from the astrological texts and Naadi readings

wherein solar names and their equivalents only were used.

But lunar naming is connected with vrathas or spiritual uses.

which could have undergone variations such as aani, aadi etc.

In this connection, let me clarify the use of different ways of computing time.

There had been in vogue solar time, (saura mana)

All these are used in day to day life.

Solar time is about the duration covered by one rotation of the earth on its axis.

Lunar time is about the duration between one New moon to another New moon.

Savanna time is about the duration from one sunrise to another sunrise.

Star time is about the rotation of the earth with reference to a fixed star.

It is time taken to come back to the same star in the course of rotation of the earth.

The solar time is used in the case of events.

That is why we say the year starts when the sun is in zero degree Aries,

For, that is the basis for computing events for the year.

from its beginning point which was zero degree Aries when this Kalpa started.

The Lunar time is used for spiritual and religious purposes.

The savanna mana is for festivals and mundane activities.

For example Deepavali is indeed at the break of dawn on the New moon day.

But any auspicious festival requires one to take oil bath.

Since New moon after dawn is a thithi for pithru kaaryam,

oil bath can not be taken after sunrise on New moon.

That is why the injunction on oil bath before sunrise on Deepavali.

The nakshathra mana is purely for keeping track of time with reference to space.

This has relevance in locating lagna and planets at any given time.

This has vast application in astrology.

As for the current topic,

the solar month is the signifactor of the event in cosmos and earthen hemisphere.

The Lunar connection is for worship purpose.

Thanks...this article gave me a detailed explanation about karthikai and its significance....

Thanks... this article was very intresting and explains a lot about kaarthigai deepam...

Thank you.
There are 2 more posts in continuation of this article. Hope you din't miss them.