Srilanka under water if on Ram Sethu is destroyed!

Here is a voice from Srilanka.

Way back in 1999, it has been pointed out by a Srilankan researcher that if the SSCP is carried out, most of North and would be flooded by the sea water. It is a matter of grave concern that not much analysis has gone into the impact on the landmass on both the sides, particularly on the Srilankan side. Like the deaf Indian government, the Srilankan Government also is turning a blind eye to this project. It seems the SSCP would finish the lives of the Srilankan Tamils before the LTTE could do it with the clandestine support of Tamilnadu politicians. For Mr Karunanidhi, it may well be a case of gain on SSCP – loss for Lankan Tamils!

One Third of will go under Water 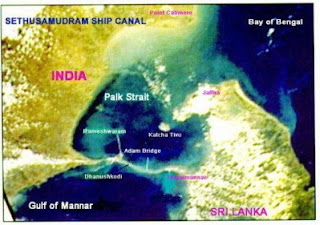 The geological survey reveals that dredging the floor bed of the Gulf of Mannar, there is a grave danger of land subsidence and likelihood of sea overcoming several islands belonging to Sri Lanka in the western coast and Jaffna peninsula along with several areas in the Western portion of the mainland up to Anuradhapura getting inundated and gradually sinking into the ocean in the future.

But despite warning by numerous researchers on this project and even by the Committee appointed by the Foreign Affairs Ministry to go into this Canal Cutting project, Sri Lanka Government has not taken up this issue seriously to sent in its protest to India, urging to stop the canal cutting forthwith.

Since 1999, K.T.Rajasingham has pointed out, ".. When India begins the cutting of a canal in the Gulf of Mannar region, there is the possibility for many islands, nearly 85 islands from the north up to Galle in the south and a large portion of land mass in the west and northern coast to go under the sea."

An Article written by K.T.Rajasingham, who was one of the pioneers who warned Sri Lanka about the dangers of this Ship Canal Project, cautioned the Sri Lanka Government way back in 1999, that if this Canal cutting is completed then "Jaffna peninsula could go under water once Miocene era lime stone reefs extracted away and its continuity forcefully terminated. It is deplorable that India has decided to implement a catastrophic land subsidence program without taking into account the serious environmental implications it might cause to its neighboring country. "

Rajasingham in his article further pointed out, "According to geologists, once a canal with a total length of 99.88 nautical miles is laid by dredging the sea-floor 35 to 40 feet below the present level, it would tend to break the continuous limestone formation, which would result in causing sudden tilt, drift, gravitational pull and numerous other violent process also might take place deep inside the floor-bed of Lanka and its islands.

He added, "It is also said that this process of land subsidence may not happen immediately, but there is likelihood of sea overcoming several islands belonging to Sri Lanka in the western coast and Jaffna peninsula along with several areas in the Western portion of the mainland inundated and gradually to sink into the ocean in the future.

Sri Lankan at one point of time showed serious concern about the proposed canal cutting to link Palk Strait with the Gulf of Mannar and the Bay of Bengal. Its epicenter was India's proposed 'Sethusamudra Ship Canal Project (SSCP)'. The groundswell resulting from it fuelled by massive media hype which was equally earth shattering on both sides of the Palk Strait.

Subsequently, Sri Lanka's Ministry of Foreign Affairs was compelled to issue a press release on 14 October 2004, to calm the rising tide of public concern over the proposed SSCP as follows:

"During the past weeks, there has been extensive public discussion regarding the perceived implications arising for Sri Lanka from the Sethusamudram Ship Canal Project to be implemented by the Government of India".

The press release added that, "overall, the views expressed in the public domain in this regard have arisen because of the possible broad repercussions of the project on Sri Lanka in environmental and economic terms, as well as concerns arising from its proximity to the territorial seas and the landmass of Sri Lanka". It further informed the public that the government had taken these concerns on board and had appointed an Inter-Ministerial Committee to report on same, while simultaneously being engaged in a process of consultation with India."

Even after the report has been presented by the Committee warning of the serious implication that will ensue, Sri Lanka Government has so far not protested to India to stop dredging the Palk Strait to avoid a major portion of the Island going under the water.

Environmental concern by the Ministry

The Minister said, "As far as the Sethu Samuthira Shipping Canal Project is concerned, I think that various aspects of the project have been taken into consideration for the benefit of India and Sri Lanka as well."

He added, "The security aspects, the environmental aspects and few social issues are also taken in for consideration. As far as the Environmentalist are concerned there are concern about Maritime, biodiversity and various other things."

"We have already informed our concerns to the relevant Indian authorities. Our concern is about maritime biodiversity that can be destroyed and they have taken into account and they have informed us that we prepare a comprehensive environmental impact assessment on that and these proposal have been send to the Indian Authority and they are yet to reply to us. At present, we are discussing how we could jointly implement various remedial measures to conserve our marine environment," Minister Champika Ranawaka pointed out.

Asian Tribune: But I think that you have not taken up the geological aspect of the project. This concern was there even before you took up the environment ministry. Some people who have represented Sri Lanka Government has not fully represented the cause and concerns of Sri Lanka.

Minister Champika Ranawaka: There is a committee at the Foreign Ministry and our officials are also members of this committee and our concerns are very clearly identified and actually the proposal has now been clearly formulated. This proposal, the environmental impact assessment has been already submitted to the relevant Indian Authorities and we are discussing now what practical measures are needed to conserve the environment. As far as the commercial aspect is concerned there will be very little impact on our commercial ports.

However Asian Tribune learns that Sri Lankan authorities have failed to look into the geological impact of this project when more than 35 to 40 meters of the seabed floor of Gulf of Mannar is dredged.

Given the findings of evidence of a an undersea city 10 000 years old in the Bay of Cambay, it is only logical to conclude that other archeological finds could be made along the Rama Sethu. Such a find is on the cards as it would explain why Anuradhapura was the only large city south of Uijjan in the First Millennium BC.

If the end of the last ice age at about 10 000 BP inundated the Western Coast of India, thus destroying a possible maritime civilisation, the remnants of this would have moved inland in terms of the Mohendejaro-Harrappa and subsequent spread of City states around that civilisation could be equally matched only in Sri Lanka and southern tip of India.

SL was clearly the epicentre of this civilisation of the early Pandyans as Anuradhapura was the clear large city in the region. Names of Pandya dynasty such as Pandukabhaya (who ruled souther India from Anuradhapura) and Panduvasudeva further confirms it. It was only after the marriage alliance with Simhala that Lanka became the Simhala nation (Mutasiva).

The alliance with the Pandyas and Cheras remained throughout the subsequent centuries. Of these only the Chera descendants (Kerala) and the Simhala descendants (Sinhala) have the capacity to have the passion to join hands to prevent this project for this and other reasons.

The false premises under which the other Pandya remnant (Tamilnadu) has been subverted into a new nation with a new name more allied with a Chola rather than the Pandya past (Vijayanagar empire survived long after the demise of the Cholas- The Nayyakars were their vassals) makes it unlikely that the head-chopping actor-politicians of Tamilnadu would ever join a southern union to protect our joint heritage.

It is up to those who speak a language now called "Tamil" but are the natives of Lanka to decide which group they belong to. It seems that Mr. Rajasingham has chosen.

Posted by Jayasree Saranathan Ph.D at 8:57 AM