The outgoing President Bush’s penchant for usage of peculiar words and phrases has already been introduced to us by Kamal Hassan in Dasavatharam.
Called as Bushism, this has even found a place in wikipedia!


At this time of his leaving office,
let us savor some more of it, as recalled by Sarah Baxter in


My Best Choice is 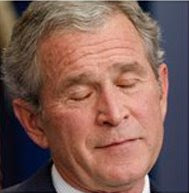 “Our enemies are innovative and resourceful and so are we. They never stop thinking about new ways to harm our country and our people, and neither do we.”


Here are other quotes:-

“Sometimes you misunderesti-mated me,” he told reporters last week, echoing one of his malapropisms from the 2000 election campaign. For good measure, he threw in a new Bushism even as he said good-bye. “My view is – is that most people around the world, they respect America. And some of them doesn’t like me. I understand that.”


And the Bushisms flowed out.
"The problem with the French is that they don’t have a word for entrepreneur.”

“If you say you’re going to do something and don’t do it, that’s trustworthiness.”

“Justice ought to be fair.” “I know how hard it is to put food on your family.”

“The important question is: how many hands have I shaked?”

“Families is where our nation finds hope, where wings take dream.”

“Our enemies are innovative and resourceful and so are we. They never stop thinking about new ways to harm our country and our people, and neither do we.”


Bush took all the ridicule in his stride, just as he was relaxed about the job he was doing.

“I believe the phrase ‘burdens of the office’ is overstated,” he reflected last week. “You know, it’s kind of like, why me? Oh, the burdens – you know. Why did the financial collapse have to happen on my watch? It’s just – it’s pathetic, isn’t it, self-pity.”


A little more reflection might have been in order. American commentators have noted how detached from his decision-making he seems, as if, to paraphrase the former defence secretary Donald Rumsfeld, it was merely the case that “stuff happened” on his watch.


Dana Milbank of The Washington Post observed: “In his own way, the outgoing president acknowledged that the past five years have, by many measures, been one long prat-fall. But he spoke as though he were an innocent bystander, watching the mishaps rather than having any culpability for them.” Whether it was conditions at Abu Ghraib prison in Iraq, Hurricane Katrina, his failure to pass immigration or social security reform – “to Bush, they were not mistakes, just disappointments”, Milbank wrote.


As he makes way at the White House for Obama, at least one set of Americans is in mourning. Comedians are at a loss. Bush was the gift that kept giving – from the inherently comic “hanging chads” during the epic Florida recount battle against Gore in 2000 to his cheery “Brownie, you’re doing a heck of a job”, when he congratulated his ineffectual and soon-to-be-sacked disaster relief chief in the wake of Katrina. 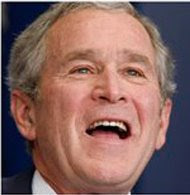 "Will the highways on the internet become more few?"

"I recently met with the finance minister of the Palestinian Authority, was very impressed by his grasp of finances"

"One year ago today, the time for excuse-making has come to an end"

"I promise you I will listen to what has been said here, even though I wasn’t here"

"You teach a child to read, and he or her will be able to pass a literacy test"

"I don’t particularly like it when people put words in my mouth, either, by the way, unless I say it

"[The Taliban] have no disregard for human life"

"When the governor calls, I answer his phone"

"Those who enter the country illegally violate the law"

"America stands for liberty, for the pursuit of happiness and for the unalienalienable right of life"

"My job is a decision-making job, and as a result, I make a lot of decisions"

"I think we agree, the past is over"