A severe cold wave is sweeping through the countries of the North, including the places where such an impact is rare. India is also experiencing the blanket of fog in most of North while the south reels under cold weather.


Astrologically the first impression I get in my mind is that the fog is early as far as India is concerned. Early morning fog stretched well after day break - if it happens in the lunar month of Maaga and the solar month of Aquarius is a good indicator for a normal rainy season in the next year. But the fog has descended 2 months in advance!


The current days are the crucial days for India as the GarbOttam days are in progress now. This period started on 28th December and will last till 10th January.

This is the period of Rain-conception days – similar to El Nino. The indicators at the terrestrial, atmospheric and celestial spheres during this time determine the onset and nature of rainy season that will start after 6 and a half months from now.

Of these 3 levels, the early fog spoils the positive atmospheric indicators of GarbOttam.

The twin eclipses and the debilitated Mars in the watery sign spoil the celestial indicators of GarbOttam.

These foretell a below average rainfall and an erratic rainfall next season. This concurs well with the yearly prediction for the upcoming year, Vikruthi that there will be less rains and famine conditions in the country in the year of Vikruthi.

It will be a useful exercise if we can pin point the combinations for severe cold waves and heavy snow fall. I have gone through some literature on this on the net, but none of them were convincing. So I decided to go by my own way of deducing the factors from the basic principles of astrology and applying them in the worst periods of cold waves. Needless to say that these factors tally well with all those periods.


Let me give them here and apply them to the worst cold periods of the past and use that knowledge to predict future periods of worst cold waves. 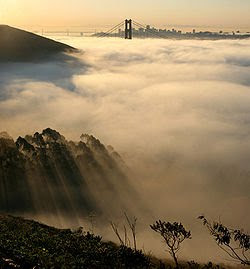 The characteristic of the cold wave is that it comes along with heavy snowfall, blizzards and fog. The basic factors in these are water content, winds and low temperatures.

Fog and snowfall have an additional factor namely, the land. They settle on land.

So we have to look for airy planets and airy signs getting connected with earthy signs. The cold component comes from watery signs – but not with moon. If moon gets connected, that will be about cyclones and rainfall. Here we have condensed water. As lord of a watery sign, I take up Mars. Mars also stands for smokiness. The smoke like fog goes well with Mars.


I don’t consider Jupiter (lord of another watery sign) for, when Jupiter comes into the picture; there will be some positives, some growth. Only a malefic like Mars can be expected to do a damaging role. The related hazards such as accidents and death have relevance to Mars only. So among planets, Saturn (airy planet) and Mars must have a presence.


The 3 watery signs (Cancer, Scorpio and Pisces) must get associated with them.

When earthy signs such as Taurus, Virgo and Capricorn also get connected with them, heavy fog can be expected. Among the three earthy signs, I assign importance to Virgo.
In all earthquake charts of high magnitude (above 8.5) since the year 1900, Virgo had been afflicted by malefics. Virgo is an earthy sign which also happens to be an unstable sign with first half of it sthira (fixed) and the 2nd half of it chara (moving). In the earthquake charts, the 2nd half of chara nature is afflicted. I consider the first half as a vulnerable area for heavy fog and snow fall.


Using these parameters, let us look at the current sky map. 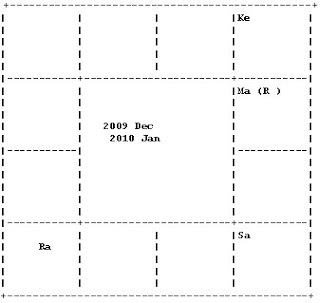 All the 3 watery signs are afflicted by Saturn and Mars. Scorpio and Pisces are aspected by Saturn while Mars is transiting Cancer.
All the 3 airy signs also are afflicted by them.
In addition, the earthy sign of Capricorn is aspected by Mars while another earthy sign Virgo is occupied by Saturn. Saturn is in the fixed part of Virgo.
This gives a perfect picture of heavy fog / snowy conditions, over a large area of the globe. Applying these parameters to the historic cold waves of the past, the frigid winter of 1917 in the US had this sky map at that time.

A retro Saturn in the watery sign is in mutual aspect with Mars from the earthy sign. Saturn aspects the first half of Virgo. I am giving the position of the nodes also to see how they too play a secondary role in all the charts of tough winter. The impact was limited only to the US. Perhaps the affliction happening to 2nd and 4th houses for US sign of Gemini explains this. In contrast, the 2009-2010 chart given earlier shows widespread cold wave. 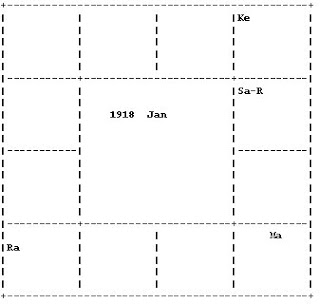 Similar conditions prevailed in the US the next winter too.


Look at the similar affliction – this time caused to 2 watery signs. Mars has shifted to Virgo, receiving the 3rd aspect of Saturn. Looking at this, we can say that domestic vehicular system was badly affected at that time. 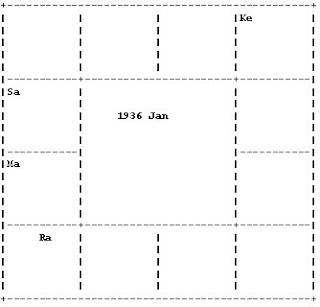 The next severe cold wave was experienced in 1936 in North America and Midwest US.


The 2 watery signs cancer and Scorpio receive the aspects from Mars and Saturn respectively. Ketu is settled in the airy sign while Saturn is in its own sign of airiness. Mars in earthy sign. 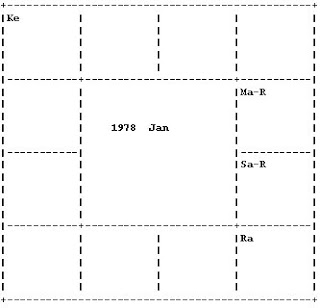 
Debilitated Mars and Ketu are in watery signs while Saturn afflicts 2 airy signs. 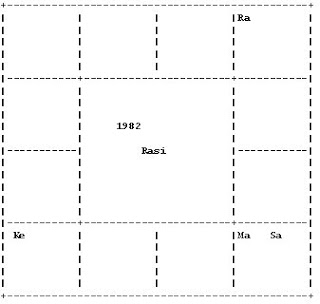 
Look at the affliction to the 2 watery signs + nodal positions + Virgo factor. 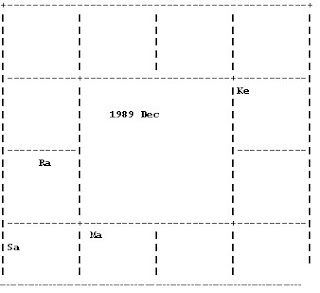 In 1989, the central and eastern USA saw one of the coldest Decembers on record. A white Christmas occurred.


Mars is in Scorpio and Ketu in Cancer. Gemini, the airy sign (mundane sign of the US) gets afflicted by sat-mars duo. This makes us say that it was a time of blizzards and severe cold waves. 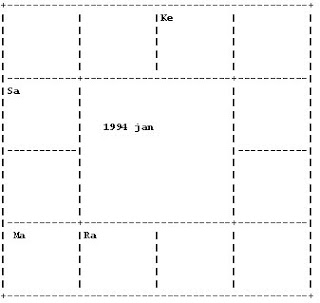 
January 1994 was the coldest month recorded over many parts of the northeast and north-central United States, as well as Southern Canada, or coldest since the late 1970s in some locations. Let us look at the sky map then.


Here all the 3 watery signs are afflicted. 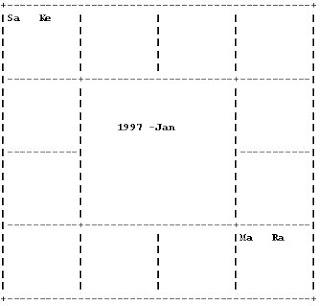 Mid January across the Northern U.S. was one of the windiest on record. With a low of around -40 °F in some places, wind caused bitterly cold wind chills sometimes nearing -80 °F. Northern parts of North Dakota saw up to 90 inches of snow.


This was one of the most severe cold air outbreaks of the 1990s. We can explain this with the earthy- watery connection of the mutually aspecting malefics at that time.


From these charts, we can see that the current sky map is worse than ever before. That is why we are finding the impact at all places in the north of the globe. 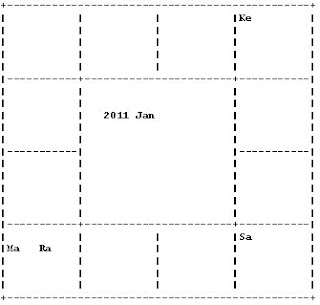 Applying these parameters for future, we can say that the next winter also will be severe but not as severe as the current one. Look at the map of Jan 2011.


All the 3 watery signs are afflicted by the 2 malefic planets. Pisces is doubly afflicted. Europe also will bear the brunt.

When we check every year from now on, we find that the cold wave repeats until winter-2014. However the intensity will decrease year after year from next year onwards. From 2015-16 onwards there will be mild winter until 2018. 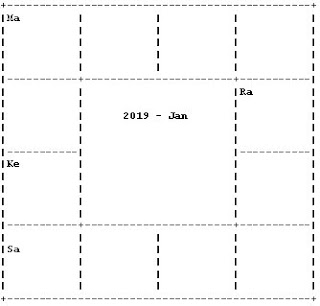 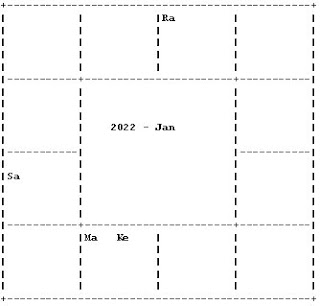 The succeeding year, 2022 will be more colder.
It will be comparable to the current year. The impact will be widespread as it is now.

Look at the affliction to all the 3 watery signs and the 3 airy signs. 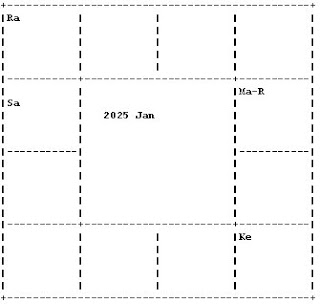