Will the father in Karunanidhi rise up for daughter Kanimozhi?

The much awaited news of Kanimozhi, the dear daughter of Karunanidhi being charge sheeted has arrived. I can not help feeling sorry for that daughter, who can not even speak fluently exuding confidence in her public appearances. She does not possess the stuff to become a leader on her own right but for the support that Karunanidhi has given her. But this is not the kind of support she needs from her father. What she needed was some thing else, Mr Karunanidhi. 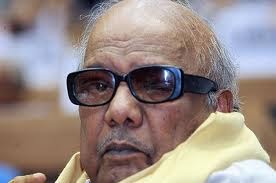 You did not give her the normal right that any child enjoys – of having a legitimate birth! One can imagine what kind of uncertainty and trauma she would have undergone right from the time she could understand her life until now as she and her mother have to grab whatever they can for their security. It is not without reason that the Hindu Law prohibits taking a second wife when the first one is there. Your scant regard for laws, morals and ethics have not only spoiled generations of people, it also had come back to you as retribution for your immoral acts as a person.
Personal ethics is the foremost virtue for any human being. You were not truthful to your legitimate wife; you were not truthful to the bond of marriage with her. You might have thought that you have the freedom to do anything disregarding that bond. But with what result? The second family can not enjoy what the first family enjoys. And the first family did not accept the second family until recently. Your daughter Kanimozhi had to grow up with the ill-will of the first family. Your lust has spoiled the peace in both the homes for a long time.
Like the daughter of your first family, you could have settled this daughter also with a secure and peaceful life. But you brought her into act as a front for you – like how you used different people to fulfill your goals. Everyone knows that the 44 crore assets that you showed for your two wives in the election affidavit were not earned by them.  Whatever you got, went in their names. The same is true in Kanimozhi’s case also.  Whatever money was given to Kalignar TV was given for your sake and Kanimozhi and Dayalu are mere names on your behalf.
The charge sheet says that Kanimozhi campaigned for Raja and such other things, but she did all that at your advice or for getting things done for you. Why didn’t you engage your other daughter Selvi in this job, or why didn’t you entrust this job to Stalin or Alagiri? You would say that it is because you had a special interest in Kanimozhi that she must get an identity of her own as the only heiress of the other family. Her mother’s insistence also could have been there. But why should she come into all these if she is not having a secure life right from the beginning? Who is to be blamed for that?
You have done enough to make your party men behave in immoral or illegal ways. You are working towards making the common man also to become immoral at least at the time of elections. With all these, you want to show yourself as a moral person with no stains in your hands. Now your dear daughter has to pay for the immoral ways for which you are the beneficiary and which was done by her to further your interests.
Will you come out to exonerate her from this predicament?
Will you tell the world that she is only a puppet and that it is you for whom the money was given – that it is you for whose sake she acted as told in the charge sheet?
Will you take up the blame from your daughter?
Should not a father do this to the daughter if he is really concerned about her?
Dayalu’s name is not there now. But who knows what will happen as there is going to be a 3rd charge sheet? If Dayalu also is going to be named, what would you do – sit in your home or accept that you are responsible?
Jayalaithaa in her interview to NDTV said that Karunanidhi would have to do introspection after the election results (against him) are out.
I think the actual introspection that he will be doing is about his own personal life and the immoral ways that he made his family members behave.
When he does that, let him know that all his acts that made his men to behave illegally immorally and
all his acts of hurt he heaped on others
that include hapless Brahmins and devotees among others
would come back to him as a payback.
உப்பைத் தின்னவன் தண்ணி குடிச்சாகணும்.
Karunanidhi is no exception!
Related post:-

Bigamy is an offence – does it apply to Karunanidhi also?

Dayalu has been named in the charge sheet as witness number 143.

But she is not charged as an accused.

Valyu was ignorant thief who learnt that his wife would not take share of his sins and prayed to Rama and wrote his story and later became a kavignar called Valmiki.
Isnt here you see some thing of opposite?, One wrote Rama Story and the other questions the wisdom of Rama as an Engineer, forcing his wife and children to bear the share of his sins , stooping from a Kavignar to a ...!

Really Nice Article,you have made up for your previous post.

He was the one who defined his wife as Daughter's Mother,rather than his wife.Such Moral Ethics?

But this article gives me a kind of "the More we write badly abt a person more we are putting him in Limelight"feeling.