At the time of Athirathram homa being conducted  last month, we also heard of an ancient ayurvedic secret being tested in a neighbouring place of Panjal. It was the Kayakalpa treatment that is supposed to restore youthfulness. The 45 day treatment has now ended and the reports say that it was a success. (Report given below).
The siddhas and rishis of yore were said to have lived for hundreds  of years. Though one of the causes is attributed to their yogic power, the much talked about Kayakalpa rasayana also could have been another cause for their healthy long life. In the travel notes of Magesthanes, it has been said that it was common sight in India to see ascetics move around with herbs and many medicines (must have been ayurvedic preparations) and distribute them to the people who came to them for the remedy from their ailments. This was 2000 years ago. How much we have lost in these couple of millennia! Can we ever gain back those lost treasures?
**************************************
From
http://www.deccanchronicle.com/channels/cities/kochi/92-yr-old-turns-%E2%80%98young%E2%80%99-after-kayakalpa-561
92-yr-old turns ‘young’ after kayakalpa 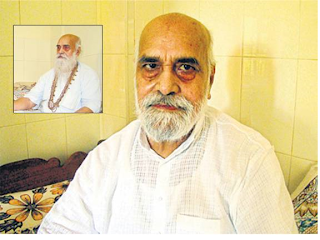 Saran Maharaj after treatment. Inset picture shows Maharaj before the treatment.
A 92-year-old ascetic, Yugal Saran Maharaj, who underwent a special 45-day 'kayakalpa' treatment in seclusion, now has black strands sprouting in his otherwise grey beard and also confesses to feeling ‘youthful stirrings.’
Saran Maharaj underwent the treatment in the three-chambered trigarbha graham at Ottappalam in Palakkad district as part of an attempt to create a `miracle' of rejuvenation using kayakalpa rasayana which is extolled in ayurveda texts.
Besides achieving a haemoglobin count of 15.5, uncharacteristic among people of his age, the ascetic has also started experiencing 'amorous feelings' that he abandoned 60 years ago. Likewise, the swelling on his feet and hands vanished a few shaking teeth have now become firmer.
An ayurveda practioner himself, Saran Maharaj came down from Mount Abu in Rajasthan to go through the rigorous kayakalpa process.
“I did this not to become younger but to prove a point ancient ayurveda can do wonders,” he told Deccan Chronicle. “I was associated with a similar treatment for social reformer Madan Mohan Malaviya in 1933.”
The trigarbha was built by ayurveda physician Dr Sethumadhavan as described in ancient texts spending Rs 32 lakh. “In the chamber one undergoes the process of change like an embryo in the womb,” he said.
However, Saran Maharaj cautions that the treatment is not for the fickle-hearted: “Imagine sitting inside a dark chamber with no water or food,” he said. “Think about having only medicines supplemented with a glass of milk.”
Related post:-

Fantastic....is the word.
What is the procedure to join this treatment. Please send more details to prof.rammohan@gmail.com. I am interested to go through the 45days ordinance.
Thanks & Regards
Ram Mohan

This treatment is available
in a ayurvedic hospital,ottappalam,kerala