Thank Karunanidhi for the success of ‘Kolaveri di’

It is said that success has many fathers whereas failure has none.  But the instant success of Kolaveri di song has only one father –it is its lyrics!
There are a few reasons articulated for the success of this song –say,  its tune, the theme and the mood. But all these 3 are not new. Songs with these 3 elements have succeeded in their respective regions / languages but not like Kolaveri song. The simple reason is that Kolaveri lyrics are understandable for all.
The tune and the voice remind me of  Ilayaraja music. Some one said that it sounds like “Nilaavathu vaanaththu mEle “ song. Yes, the music seems to be a mix of some already heard songs.  Even Dhanush’s voice reminded me of Ilayaraja.  But what stands out is the lyrics.
English- mixed songs have generally appealed to larger masses. When people understand the meaning of the words, they can easily relate with the song and repeat the song. When this happens for a song having a good musical appeal, then it becomes a runaway hit. 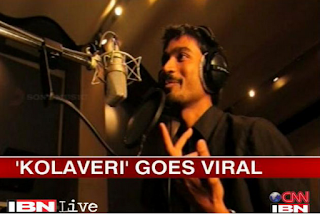 In the past songs like ‘Take it easy Urvashi’ and ‘Chkku bukku rayilu’ also received wider attention all over India. But they were adapted in other languages and succeeded.  In contrast, Kolaveri di is fully understandable. The broken English that many an average Tamilian is known to speak sounds funny, new and also easy to understand.
This is a kind of English that no one else can make, I think. This is an English that can crop up among people who face constraints in learning this language. The Tamil Chauvinist Karunanidhi had successfully stalled the growth of English and Hindi in Tamilnadu. While 2 generations of people have come up with no knowledge of a single word in Hindi, the love for English could not be curtailed. Our boys have to somehow know some English to attract girls and to fare well in campus interviews. The result of this is the birth of ‘Kolaveri di English’ which many like to call as Tanglish. No It is not Tanglish, it is English words spoken with native slang. It has appealed to the people and also made the song understandable. I think that is the main cause for the success of this song.
The irony is that such a suppressed love for English and success of such English cannot have come through but for Karunanidhi’s   policies on Tamil. He went to ridiculous extremes by saying that films having a Tamil name would be given tax rebates – this is irrespective of the contents of the film. 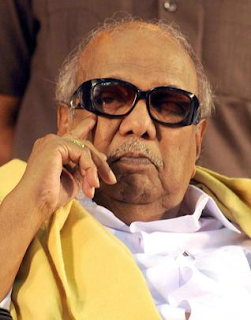 Hardly six months after he was removed from power, here is a Tamil movie titled “3” churning out a song “kolaveri di’ full of English words, I wonder whether Karunanidhi heard this song and if so, what his feelings were like!!
Posted by jayasree at 6:20 PM

I am sure he has no issue when his own family runs "Red Giant", "Sun", "Cloud Nine" productions.
We are delighted when a foreigner specializes in Tamil but yet upset when our own speak a foreign language. What kind of double standards is this?