Origin of Easter from Ishtar and Ishtar from Hindu Goddess.(part-4)

Before ending, let me say a few words on serpents. Serpents are depicted as 2 main ideas in Hindu Thought. One is the sub-terrain mantle that comes out of the vents during earthquakes and volcanic eruptions. They are known as Naga or serpents. The underground tunnels and vents upon cooling became underground caves where the snakes started to live. Those who made the caves their dwelling places were also known as snakes or serpents or Nagas. Destruction by earthquakes or volcanoes is seen as dance of snakes.

The core of the earth is said to be the foremost snake, the Adhisesha. It is because of the core, the earth remains intact. This is metaphorically said that Adhisesha is bearing the weight of the earth. An adaptation of this is Atlas of Greek mythology. While Adhisesha bears the weight from within the globe, Atlas bears it on his shoulders. The same idea in two cultures cannot have been conceived independently of each other. Adhisesha concept is earliest and symbolic, whereas Greek Atlas is a depiction of an impossible type. This is the result of loss of touch or continuity with the original concept.

The snake is once again associated with the two main entities of Godhead in Hinduism. Shiva’s ‘twilight’ dance is indeed known as ‘playing with the serpent’ (BhujangastrAsa). That marks the collapse of the worlds and breaking of the lands. The liquid magma shoots out on all directions. They are called as snakes that once dwelled in underworlds, now coming out.

Another type of snake is the life form, our jiva or the soul – which is what we are in our inner self. The soul or jiva gives life to the body and is of the size of our thumb according to Upanishads. It resides as a coil of a snake in the tail of the spinal cord. The very purpose of meditation is to rouse that jiva. It is characterised as a serpent lying dormant within us. Almost everyone would have had a dream of snake some time in their life. It is due to the nature of this snake- like jiva. When aroused through Yoga or meditation or breathing procedures, this snake- like jiva (called Kundalini) rises up. It is because Sage Patanjali gave us the wisdom of Yoga and meditation and he himself has mastered the rise of Kundalini, he has been depicted as snake bodied in iconography. 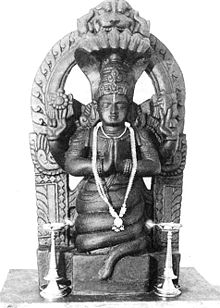 Sage Patanjali (the master of Yaga) in Hindu temples.

After deluge – during cosmic devolution, where would the snakes (jivas) go? They are infinite (ananta) and are held by Vishnu or Narayana in sleeping posture. 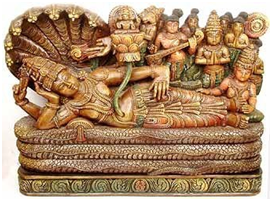 When the physical worlds spring up again,  these serpents (jivas) enter them and start new life.
The concept of serpents in these two basic levels is seen in various forms. Most noted one is when the coiled serpent as Kundalini rises up through meditation and comes out through the nostrils. Its image is like this 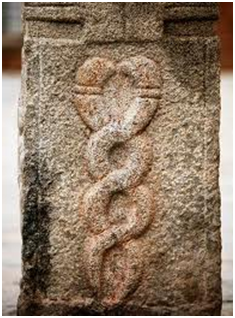 An interesting depiction of this is seen in the hand of Jewish Asherah! 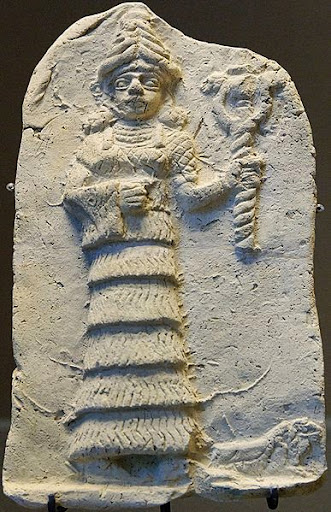 This is Ishtar, also considered as Aherah, of the Jewish Thought holding something in her left hand which is considered by many as serpents. But looking at the shape of it, it looks similar to the previous image found at many places in India. Infact sages and yogis used to have a wooden hand-rest made in the shape like this for keeping their hand on. Take a look at the figures below. 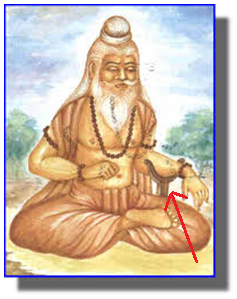 In the figure of Lord Shiva shown below, the position of the hand rest is the right way to keep. 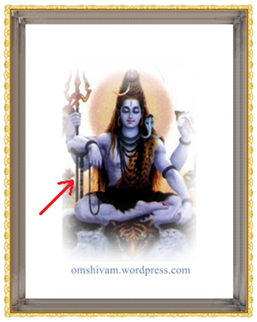 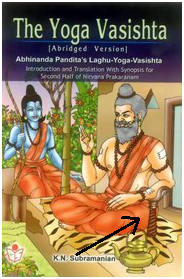 The hand-rest as shown in the above picture and the Kamandal (pot) were the 2 main accessories of sages in those days. The hand-rest in the shape of two snakes coiled together and looking away at the top, with a connecting rod in between them as a rest for the hand of the sage, is similar to what Asherah is holding in her hand. Not only this, any stick that the yogis and sages possessed used to be carved with a snake head!

Asherah is the female consort of Yahweh. In Hindu Thought Durga, the consort of Shiva blesses the devotee aspiring to do yogic meditation.  In this role, Durga is called as Vishnu Durga who helps the devotee in this regard. These explanations are endless. But the concepts, ideas and interpretation for Asherah – Ishtar images found in Hindu Thought do indicate from where these ideas have sprung.
Moreover Asherah was associated with tree and was worshiped as Tree Goddess, according to Hebrew Bible. (http://thequeenofheaven.wordpress.com/2010/10/27/asherah-part-i-the-lost-bride-of-yahweh/ ).

With the advent of Christianity, Asherah was wiped out from the memory of the people.
Female Goddess along with images of snakes, installed under the trees is a Hindu concept that continues even today. Mayamatham, tells about the name of the tree unique for each of the Sapta Matas.

The association of tress and snakes for the Goddesses is not without meaning. The meaning is something which is applicable only to India. The meaning is such that there was a purpose of conservation of natural sources of water. India is dependent on seasonal rainfall which actually gets collected in underground water tables. The underground water links are called as water veins or jala nadi. Wells, tanks and lakes were dug where these water veins ran. The unique feature is that these underground water veins were identified by means of specific trees and ant-hills (where snakes live) and snake holes. There is a separate chapter on this, by giving the names of more than 50 trees of water veins, in the book “Brihad samhita” written by Varahamihira (written sometime between 1st and 5th century CE). For details: http://jayasreesaranathan.blogspot.in/2009/08/science-of-detecting-underground-water.html

These trees and ant hills provided the easy clues to identify water sources. The best way to make people preserve these trees and thereby the knowledge of presence of water veins was to install snake gods and female Goddesses under these trees. This is how the tree worship and snake worship under the trees came into existence.

This is relevant in a country like India having underground water veins, but not in other countries. In places like Sumeria or Levant (Lavana samudra / sea of salt), this kind combination of water veins with specific tress and snake holes do not exist. But presence of tree- snake- female goddess culture in these places about 2000 years ago only goes to show the spread of or adaptation of a similar culture from India. This tree-snake presence for identifying water veins existed in the Indus sites which was originally the site where river Saraswathy flowed. The proof of it is in the name of the sage with whim this theory is associated by Varahamihira in his book. The sage was “Saraswatha”. He got his name due to his association with the region of river Saraswathy. The loss of river bed of Saraswathy due to tectonic movements resulted in water crisis and it necessitated sage Saraswatha to look for clues to identify the places where the river water was concealed as underground water table.
The following image found in Indus sites is perhaps the oldest available proof of female Goddess installed under a tree for worship. 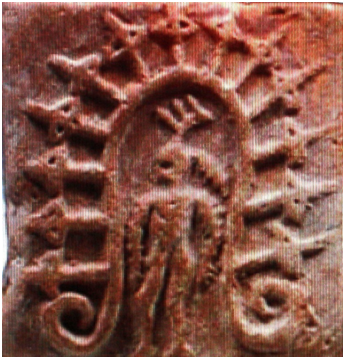 The site where this was found could have been the region where water table was close to the surface for easy access.

Beyond this region, i.e., in the North West of India, this kind of tree- water table connection is unknown and not possible too. Such being the basis of tree- goddess- snake worship, an Asherah or any entity with similar concept anywhere outside India can only be an adaptation from Hindu ways of worship.

(concluded)
Posted by jayasree at 2:40 AM

One point, I think the uttarayana today also starts somewhere around December 25th per Gregorian calendar, no? Also, werent they worshiping 'ishtar-enki' vs just ishtar? Sort of worshipping as uma-maheshwara vs as just uma.

// To do that successfully, they had to incorporate all pagan worship as symbols and tradition into Christianity//

That is their strategy. They have successfully done that all these years and found success in India too. Whom do you think is Velankanni in Nagappatinam? She was Vel Ilam kanni- of the kind of Kumari devi. She was Christianized, though by retaining the local Hindu rituals. Paal kudam, mor kudam, karumbu vil - disgusting to see all these being done in the name of Christianity!! They have stolen many Hindu concepts and preach them as Christian ideas. The songs and 'Bhajans' they do are the worst cases of plagiarism that I wish someone challenges them on copyright issues.

On December 25:- Even in India we had a clear demarcation between Makar sankaranthi and Uttrayana homa. Makar sankaranthi coincides with the entry of the sun in Capricorn. Uttarayana homa was done on the day of sun's sojourn towards north. Today all these are fused, but not so in the past. My old article might help:-


From what we find from the report of the Calendar reforms committee published in 1952, people (Greeks) did not agree to starting of the year in the winter solstice (Dec 25th). It was Alexander who suggested that date. Perhaps that was because Mithra's birth day fell on that date. I explained in part-1 the significance of this date.

There are enough indications of worship of Shiva in Europe (Omphallus). I would do a separate post on that some time. As far as I can search for the roots of that worship, I can see Jewish and Druid influence. I am of the opinion that Druhyu, son of Yayati took the Vedic thought and worship (Shiva including) to Europe as early as 7000 years ago. I have a strong proof to substantiate that which I will write in my blog on Mayan.

In contrast to this date of winter solstice, Easter / Ishtar comes in spring. That is the first sunday after Holi / Pangunu Uttram / Full moon of Panguni / kaama festival etc.

Please read "The Black Madonna" which was inspired by your Ashura post.