Manimegalai is a historical character of the one of the Epics of Tamil in post sangam period. She was the daughter of Kovalan born to Madhavi. On hearing about the developments on Kovalan's death and Kannagi's wrath by burning Madurai, Madhavi turned morose and subsequently took to asceticism. Her daughter was Manimegalai who also took to asceticism mainly because of the gravity of destruction that took place due to Madhavi coming into the life of Kovalan. Manimegalai received a mantra and an "Akshaya Paatram" ( a bowl that ensures continuous food) by which she fed the hungry people. This story was supposed to have taken place in the 1st century AD. One does not really know that this vessel was real. This could also mean that she fed people who came to her as it was a regular practice with many philanthropists and mutts to feed anyone who comes to them. Karunanidhi compared Sonia with this Manimegalai for having introduced the Food Security Bill. 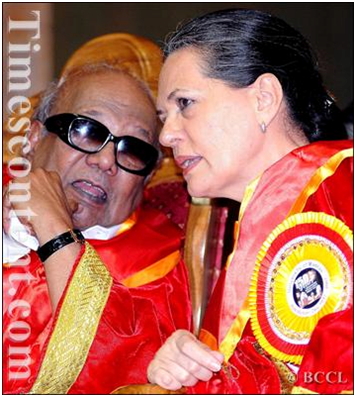 If someone depicts Sonia as Mary, Christians would object to it. If someone depicts Sonia as Lakshmi, Hindus would object to it. But Sonia can be compared to a Tamil Epic figure, no Tamils would object to it. After all, it is Karunanidhi who is doing the comparison. He is the spokesperson for Tamil. Can anyone think of questioning him? So let me not question him on this comparison – even though there is a glaring difference between Manimegalai and Sonia for,  Manimegalai had given up everything in life and fed the people from her own means but Sonia giving up PMship was a farce but holding on to her dynasty and politics by eating up the wealth of our country and paying for the FSB from tax payer's money.

After all, this comparison by Karunanidhi is apt because there is Money in Manimegala Sonia and there is Kani whom she had to uplift! Moreover Sonia is only following the footsteps of Karunanidhi. Both DMK and Congress wallahs including MMS used to say that Congress under Sonia is functioning under the advice of Karunanidhi only! It seems to be true in FSB and other issues.

Karunanidhi was the forerunner of offering mega freebies. It was a game changer for him in 2006 state elections when he offered to give free TVs and rice for Rs 2 per kg. Initially we all thought that he was offering from his or his party's money. Then only we realised that it was from our money he was offering these freebies. What is so great about it?  Anyone can do it if they are in his place. But when doubts were raised on the economic feasibility of offering them, our Finance Minister (then and now) chipped in and asked why not? He said that it was feasible and even praised the DMK manifesto as the Hero of the elections.

The first seeds of freebie culture was sown then by Karunanidhi and watered by P Chidambaram. True to the gloating of DMK and Congress men, Sonia followed his footsteps and introduced the FSB for which our money is going to be used and misused. Karunanidhi even praised her illness on that day saying that it was because of her intense feelings for bringing out that bill, but situations so turned out that it was India which was put in ICU by that Bill and her visit to the AIIMS was only a symbolism of the critical sickness of India. She came back home after a few hours with no illness detected. But India is not likely to come out unless she takes a permanent return to her home in her motherland. Thinking of Motherlands – if she is the son of the soil of our land she would not have done this. For her, her party's future is of concern and not Indian future.

One may ask if Karunanidhi was not the son of the soil. Karunanidhi is a traitor. Atleast a considerable section of people of Tamilnadu know that he is traitor and an enemy of the country. MGR was right in recognising him as "Theeya shakthi" (bad shakthi). When people can identify an enemy they would be careful. When Moghals came we knew that they were our enemies and fought them. When the British came we knew that they were the enemies of our country and therefore resisted them. But when Sonia is doing so many things against the interests of the country, no one realises this, because they have not understood that she is an enemy. It suits the congressmen, their allies and the main stream media because they are being fed by her – like Manimegalai having Akshaya paatra. Loyalty of the salt eaten – the basic Indian cultural trait is still working in them! Perhaps Karunanidhi remembers this role of her – a more suitable role that fits with that title – when he called her as Manimegalai.

Another crucial area where Sonia followed his footsteps is in corruption. Karunanidhi had the distinction of doing scientific corruption even as early as 1970s.No other part of India or the centre at that time was known for such corruption. But it was after DMK entered the central govt in UPA -1,  DMK style of scientific corruption was learnt by others in the centre and spread to every place in the government. Without Sonia's connivance none of these including 2G scam could have taken place. "Money"-megala Sonia and Karuna"Nidhi" make a perfect pair in having looted the country and misused our money. There is no wonder Karunanidhi remembers her worthy of that "Money".

Chennai: A few hours after praising her for the passage of the Food Security Bill in the Lok Sabha, DMK chief M Karunanidhi got more effusive in his praise for Congress chief Sonia Gandhi. Making a speech at a private function in Chennai on Tuesday evening, the DMK leader compared Sonia Gandhi to a Tamil epic heroine, Manimegalai. Quoting from the famous epic of the same title, in which the heroine feeds thousands of people with the Akshaya Pathiram (a vessel which was always filled with food), Karunanidhi called Sonia 'India's Manimegalai'.

Claiming that there was nothing political in his praise for the Congress chief, Karunanidhi said, "I am merely looking at the issue from a humanitarian angle." Referring to her sudden illness during the Parliament session on Monday, Karunanidhi said it was quite possible that intense emotions could have caused it. "I can understand that it could be a very emotional moment for her since she was successful in getting the food bill passed in Parliament, which is a big achievement," he said.

He added, "We need several Manimegalais to help the crores of poor people. Sonia is one such Manimegalai." The DMK's mouth piece 'Murasoli' highlighted the portions of his speech on Sonia Gandhi.

I dont think the Congress would go for early elections when the rupee is doing very bad now. My assessment is that once Saturn crosses Rahu on 25th sep 2013, some judicial pronouncements would be harsh and harmful for UPA, congress and DMK. Moreover Robert Vadra's bad time begins from November this year and is going to last till the first half of 2016. He will become the Achilles heel for Sonia. If elections take place between March and 2nd of May 2014, some clear verdict will come, if later than that, a hung verdict.

On temple gold, I dont think the Govt can do that. Constitutionally it can be challenged.