I used to think that the foremost purpose of Ramayana is to evoke emotions – of empathising with Rama and Sita, to feel like how Rama and Sita felt for each other. This feeling of missing each other and craving for reaching each other is the bottom line of Moksha. Like Sita, the Jiva must crave for reaching Brahman. Like Rama, Brahman takes every effort to reach and unite with Jiva. The constant thought of each of them for each other is the fuel that makes them move towards each other and unite. The event of Moksha happens when the Jiva constantly thinks of Bhagawan and Bhagawan constantly thinks of reaching the Jiva. It is a two-way movement towards each other in a single track.

In this equation, Sita does nothing other than ‘thinking’. Only Rama has to take action! But constant reminders are being sent to him that Sita is waiting to be taken back to him and by him. This idea is the idea of reaching Moksha – of a two way Thought process involving every Jiva thinking of Brahman / Bhagavan and waiting for Him to take over and Bhagavan too constantly working towards making the union happen. In Krishnavatara this idea is conveyed by the dance of Krishna with gopikas by holding their hands in such a way that each gopika thinks that Krishna is dancing only with her. 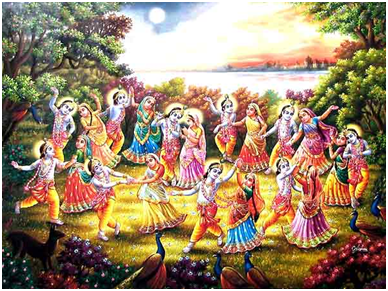 This dance is a culmination of union or Moksha with Bhagavan. In mundane level this dance has a girl and a boy alternating each other in a circle by holding the hands to form a circle and dance around. Originally the idea is that the boy is in the image of Krishna. The girl who holds his hand on one side thinks that it is Krishna holding her on one side and again it is Krishna holding her on the other side. This idea was behind Hallisaka dance of Gujarat. It was known as “Alliya- kootthu” in sangam age Tamilnadu. It was also the basis of Kuravai- kootthu of Aayar lands (yadava) of Tamilnadu. This dance was done by girls and boys at the end of bull fight in which the prospective groom is chosen. The groom and the bride for whose sake the bull fight was done, were the main couple of the dance that was in fact a symbolism of union of Jiva and Brahman. It is for this reason, the union of couple is characterised as “Chitrinbam” (small happiness) and the Union with God (Moksha) is characterised as “PErinbam” (Big happiness) in Tamil.

Krishnavatara was more recent compared to Ramavatara. Rama did make it more difficult to drive home the idea of Moksha!! In Ramavatara it was one to one between Rama and Sita. All the Jivas’ travails had to be conveyed by Sita and that made things too painful for her for most part. In proportion to that, Rama also had to exhibit a heavy load of pangs of suffering in having lost Sita and in working towards reaching out to her.
The symbolism is that Bhagavan has lost his dear wife, the Jiva in the forest of samsara to be devoured by asuric forces. He laments, pines and behaves like mad for having lost her. But he is never found wanting in his efforts to search for her and reach her. But the moment he got the inkling that Sita had been sighted, what a wonderful moment it was.

The verses describing that moment in Ramayana move me into tears every time I read them. Whenever I read this chapter on Sugreeva conveying to Rama that Sita had indeed been sighted, tears would start pouring down my eyes. I would stop the reading at that, go near the Ram- Sita Pattabhisheka picture that I worship and start conversing with Him.  “Kausalya Supraja Rama samaashvasihi” (कौसल्या सुप्रजा राम समाश्वसिहि VR -5-64-28) Kausalya Supraja Rama, get consoled well – the words that Sugreeva speaks to Rama.

Hi Rama, have no worry any more. Sita has been seen. Be happy that she is alive. Be happy and by that let me be also happy. I am very happy to see you happy. Enough is enough with all the sufferings. Think about what to do next. Sita is waiting there with no one to give her hope. Get up. Utthishta Rama. Go and bring her immediately.

Sita’s words “श्रुता हि दृष्टाः च मया पराक्रमा |” (5-37-63  ) keep ringing in my mind. The 4 verses starting from this verse are recited by me every day. Like Sita I have heard about your valour in battles. She has seen you outshine others. She has seen you like the Sun. But she is too battered with grief. You have not yet done anything to redress her grief. Rama, true to your name as Rama, the giver of joy, start immediately and bring her back. Give her the joy.

She cannot come on her own. She has conveyed this to Hanuman. She has asked Hanuman to bring you to her. You have to go to her.
स मे हरि श्रेष्ठ सलक्ष्मणम् पतिम् |
सयूथपम् क्षिप्रम् इह उपपादय |
चिराय रामम् प्रति शोक कर्शिताम् |
कुरुष्व माम् वानर मुख्य हर्षिताम् ||
("O the excellent of monkeys! You, as such, soon bring my husband here along with Lakshmana, and the chiefs of army. O the best of monkeys! I am emaciated with grief about Rama since long. Make me now joyful.")
Go, get her back and bring her the joy. 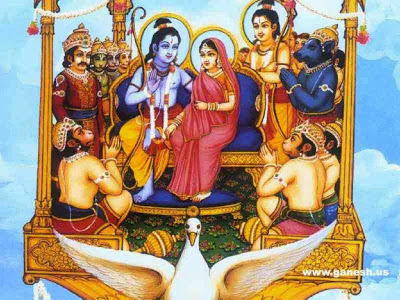 Rama was addressed in this verse as “Kausalya Supraja Rama” – a term that we are familiar with in Venkateswara Suprabatham. Rama means ‘the one who brings joy to everyone” (‘sarve ramanti yasmin iti Raamaah’). The moment he was born, he brought joy to his mother. From that time onwards he was giving joy to anyone and everyone who came across him. But the giver of joy was joy-less after he lost Sita. The joy was recaptured by him when he heard the news from Sugreeva that Sita must have been sighted by the vanaras who were reported to have ravaged Madhuvana. While conveying this news, Sugreeva reminds him of his quality of giving joy to others and for him to be joyous in order to make others joyful.

By this logic, it is also conveyed that it is not right for the Jiva to do nothing to attract the attention of Bhagavan. One has to pray, one has to think of Him constantly as the Protector. Constant prayers, thinking and craving for Him must be there to qualify for Moksha or Union with Him.

Rama Navami – why celebrate Rama’s birthday on thithi and not on birth star?

The Crow, the crime and Rama’s reasons.

“Is Rama a female in a male’s garb?” (Sthreeyam Purusha Vigraham?) – Rama-Navami musings!

Very happy to read this article on ShriRama Navami. You have echoed the same thoughts that my Vidya Guru used to preach. He always used to say that it is Bhagavan that has to find Jiva and not the other way round. All that Jiva can do is to constantly think about him. My guru also used to say that both Bhagavan and Jiva need the medium of a Mahapursuha (or a Maha Bhagavata) like Hanuman in Ramayana to convey the message of Bhagavan to Jiva and vice versa. Maybe, that is why it is said that "Swami Pushkarini snanam, Ekadasi Upavasam, Sadguru samaashrayam threenyantha durlabham". And when the longing that Jiva has for Bhagavan becomes unstoppable, Bhagavan finds it even more difficult to withstand the separation. Case in point is when Rama says that he is not able to live for even a second when Hanuman conveys to him that he has seen Sita and that she will be alive for only 1 month and that Rama has to rescue her within that time period.

This intense feeling is 'Bhakti'. To quote Acharya Ramanuja it is "Thaila dharavat Avichinna, Preethi poorvaka anusandanam
bakhthirit abijeeyathe". It means like oil that is poured into another vessel makes a continuous contact, the preethi that keeps forming continuously is Bhakti. What we see in the emotional craving for each other of Rama and Sita is of this nature. In the same nature, when we develop preethi for Bhagavan, that is Bhakti.

Bhakti is treated as 3-satge process in Bhagavad Gita as Para bhakti, Para jyana and Parama Bhakti. Acharya Ramanuja deals with these in Gadya-trayam. Nammazwar's verses also depict this.

The first stage is Parabhakti -
# It arises due to good deeds done in previous
births.
# It helps one to know God as taught in scriptures.
# In other words one must be born with some knowledge
of the Supreme to have parabhakti.
# This helps the devotee in moving ahead in Bhakti
marga.

The second is paragyana-
# This is the DESIRE to see God.
# The devotee feels the pangs of separation from God
and longs to have His dharshan (not the archa-moorthy
but the real experience to see Him.)

The third is parama bhakti-
# This is a longing for a complete experience of God
in fullness.
# Attaining this stage signals FINAL RELEASE.

Posts like these make your blog such a delight to read. May Lord Rama bless all of us. Happy Sree Ramanavami.

My humble pranams Mr Chakri. Let Rama, Rama be heard everywhere. Let everyone be filled with joy by Rama shabda.

During and after the time of Rama, Rama shabda had reached far and wide in Europe too. The numerous place names with 'Rama' in them can not be explained without pointing to spread of Rama's fame to those places. Following are the quotes from Bible that contain "Rama" names.

When I browsed this site for RAMA, RAMAH, I got the following:

(5) RAMATH-LEHI - The place where Samson killed one-thousand Philistines with the jawbone of a donkey (Judges 15:17)

(8) (Called also Raamses.)
(9) RAMESES - The district in Egypt which was inhabited by the I » City of, built by the Israelites as a treasure city for one of the Pharaohs (Exodus 1:11)

You will see where RAMAH appears in Bible.

(If you click each one of the following in the website, you will find the passages in which it appears)

“A voice is heard in Ramah,
weeping and great mourning,
Rachel weeping for her children
and refusing to be comforted,
because they are no more.”[a]