5000 year old Iceman Otzi from Alps was from India!

Was The Indian Sub-Continent The Original Genetic Homeland Of The Europeans?

Did Indians migrate to Europe as early as 3300 BC?

Iceman’  theories are often promoted by the colonialist historians and their successors in the field of ancient Indian history. They seem to do that like the eponymous character of The Iceman Cometh, one of the most famous plays by the great American writer Eugene O’Neill, which deals with how people hold on to delusions that provide meaning to their lives only to be shattered by an individual who calls them out for what they are.

The beginnings of this story go back to September 1991. Two tourists found the body of a person, now named Ötzi the Iceman, frozen at 10,000 feet on the Alps near the Austria-Italy border. A variety of medical tests showed that he died around 3300 BC. This is the oldest known natural human mummy in Europe that has provided much information on Chalcolithic (Copper and Bronze Age) Europeans. 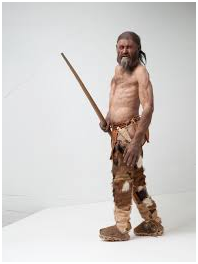 DNA tests have shown that the Iceman has living relatives in Austria. Microevolution, as in the mutations of the mitochondrial DNA (inherited from the mother) and the Y chromosome (inherited from the father), makes it possible to trace and connect populations across time and region. When the random mutations are calibrated one has a genetic clock.

Other studies can complement the DNA evidence. Thus, even without historical evidence related to the spread of the potato plant, a scientist can deduce the Andean origin of the plant from the fact that there exist many varieties of it in Peru and just a few lines in Asia, Europe, and Africa.

Pathogens with distinct phylogeographic pattern can also be used to reconstruct recent and ancient human migrations. Researchers at the European Academy of Bolzano (EURAC) thought of doing so and they picked on the stomach bacterium ‘Helicobacter pylori’, which is found in all human populations, with two major strains that are Asian and African. The modern Europeans have ‘H. pylori’ that is a hybrid between Asian and African bacteria.

In research published in the 8 January, 2016 issue of the Science Magazine, the EURAC authors announced that the Iceman’s stomach has ‘H. pylori’ that is of Indian origin (but now extinct) and not related to the hybrid variety of the modern European “admixture.” This means that Indians as migrants were present in Europe in 3300 BC.

This is the earliest example of a pattern that has been repeated in history many a time. We have Mitanni kings with Sanskrit names who ruled in Syria for centuries in the second millennium BC. The Gundestrup cauldron found in a peat bog in Denmark and estimated to have been made about 2000 years ago has images of Indian deities on it (including, most strikingly, that of a goddess worshiped by two elephants, Gajalakshmi), and thus may have been done by craftsmen of Indian origin, perhaps in Thrace. Trade between India and the West has been traced back to the third millennium BC. Such continuing interaction must have led to diffusion of art and culture.

Now let’s go back to DNA evidence harnessed to reconstruct ancient migrations. An extensive genetic study of today’s Europeans, which was published in June 2015 by the journal Nature, shows that they descend from three groups. First of these are the hunter-gatherers who arrived about 45,000 years ago and then came farmers from the Near East about 8,000 years ago. Finally, nomadic sheepherders from western Russia, called the Yamnaya, arrived about 4,500 years ago. The authors of the study suggest that the Yamnaya language most likely gave rise to many of the languages spoken in Europe today. Apparently, Yamnaya were speakers of a Sanskritic (Indo-European) language, and the wave that came in 8,000 years ago might also have been Indo-European.

The Iceman findings appear to corroborate this study as well as the work of Stephen Oppenheimer, who in his book The Real Eve, synthesized the available genetic evidence together with climatology and archeology with conclusions which have bearing on the debate about the post-migration population of India.

Much of Oppenheimer’s theory is based on mitochondrial DNA, inherited through the mother, and Y chromosomes, inherited by males from the father. According to him, modern man left Africa approximately 90,000 years ago, heading east along the Indian Ocean, and established settlements in India. It was only during a break in glacial activity 50,000 years ago, when deserts turned into grasslands, that people left India and headed northwest into the Russian steppes and on into Eastern Europe, as well as northeast through China and over the now submerged Bering Strait into the Americas.

First, that the Europeans’ genetic homeland was originally in South Asia in the Pakistan/Gulf region over 50,000 years ago; and second, that the Europeans’ ancestors followed at least two widely separated routes to arrive, ultimately, in the same cold but rich garden. The earliest of these routes was the Fertile Crescent. The second early route from South Asia to Europe may have been up the Indus into Kashmir and on to Central Asia, where perhaps more than 40,000 years ago hunters first started bringing down game as large as mammoths. (pp. 153-154 of The Real Eve) 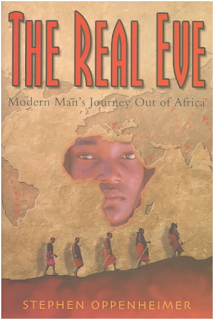 Oppenheimer’s ideas also help explain regularities in languages that are spread widely across distant lands with an overlap in India. Thus the Indo-Pacific family covers the languages of the Australian aborigines and the Papuans, the Austro-Asiatic cuts across from India to the Pacific (the Munda in India, the Thai, and the Vietnamese), and the Dravidian has connections with the Altaic (Japanese, Korean, and the Turkic).

The idea that the development of the Indo-European languages took place in India explains how a variety of such languages are to be found in the sub-continent. Both the so-called kentum and satem language subfamilies are represented: Bangani is kentum, it is found in the Himalayan region; and languages such as Sanskrit, Hindi, and Assamese are satem.

In the long list of genomic “firsts,” scientists have added another today: the oldest known pathogen ever sequenced. And it comes from perhaps the most famous “iceman,” Ötzi, who lived in the Alps of Central Europe more than 5,000 years ago. The secrets lurking in its genome suggest surprisingly recent ancient migrations of people into Europe.

Ötzi was found on September 9, 1991 by German hikers at an altitude of 10,000 feet near the Austrian-Italian border. He had a number of physical ailments: Lyme disease, high levels of arsenic, tooth decay…and yet, what killed Ötzi appeared to be an arrowhead, found in his left shoulder. The weapon must have lacerated a major artery once it entered his body. 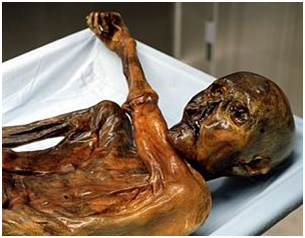 A little over five years ago, Albert Zink and his colleagues at the European Academy of Bolzano/Bozen (EURAC) decided to look for the presence of pathogens and microorganism in Ötzi’s stomach. They were also searching for a special bacterium called Helicobacter pylori.

Our bodies are host to around 100 trillion bacteria—H. pylori is just one species, but it is present in more than 50% of the world’s population. When it was first discovered, H. pylori was thought to cause cancer and ulcers. However, most people with the bacterium do not experience symptoms or complications, despite its association with gastrointestinal problems. Instead, H. pylori appears to play an important role in the overall gut ecosystem, and the absence of it is linked to several immune and metabolic disorders.

Now, a team of scientists working with Zink and microbiologist Frank Maixner—also from the EURAC—has processed Ötzi’s genomic data to better understand the contents of his microbiome and what it can tell us about our microbial “hitchhikers” through the ages. When the team first placed samples from Ötzi’s stomach under the microscope, they were skeptical as to whether or not they would see any H. pylori strains. But once they extracted the entire DNA of the stomach’s contents, they were able to isolate the H. pylori sequence.

What the team found is that this ancient strain of H. pylori belonged to a now-extinct population of the bacterium that was first found in northern India and other parts of southern Asia. In addition, the scientists found little evidence of the African strain which is present in the modern European “admixture.”

“This puts things into wonderful perspective for us with just one genome,” said study co-author Yoshan Moodley of the University of Venda in South Africa. Since H. pylori has been floating around inside the human microbiome for a long time, it has co-evolved with humans, so genetic analyses of H. pylori strains can reflect the history of human geography as a whole. What this new discovery shows is that relatively recent migrations (after Ötzi’s time) must have occurred for the European strain of H. pylori to become what it is today.

“This genome is very unique and gives us an idea of what we can expect from the emerging field of microbiology in the future,” said Thomas Rattei of the University of Vienna. “It allows us this absolutely unique window into the Copper Age.”

Arjuna's route - how Krishna's kin moved out of India