The daily observation of Garbottam in February 2016 will have an impact in the 2nd half of August and 1st half of September 2016. (from 11th August to 8th September to be precise).

The daily observation is purely based on physical observation of 5 meteorological features throughout the day (as far as I could). Only when Moon / Sun becomes conjunct with a malefic (Mars, Saturn, Rahu and Ketu) on a day of good Garbottam, I have made a note of it in the chart. Such a combination is said to indicate hail storms or thunder showers or cyclones. In the month of February, Moon was made such a conjunction on only one day when there was a moderate to good Garbottam. It was on 22nd February on the day of Masi Magam (Mahamaham) when the cloud and wind conditions were very good in my place of observation. Moon was conjunct with Rahu on that day. The corresponding date is September 1st. But the previous night is likely to receive good showers as the Garbottam thithi corresponds to the thithi of the previous night. 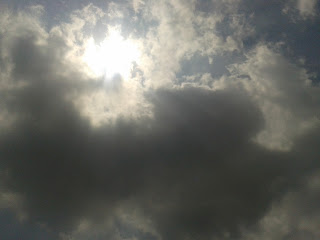 Another observation I want to record is the exclusive thunderbolt day called “AvaNi muzhakkam” which is to happen on 24th august. Though the corresponding date in February did not have good Garbottam features, some peculiar formation of clouds were noticed. We must wait and see whether there is any Avani Muzhakkam on 24th August or one or two days before and after that. (schools of thought vary on this date). 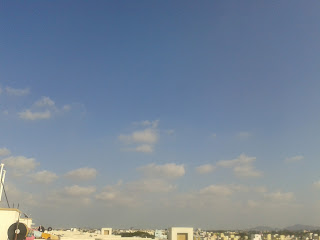 14th Feb, 2016.
Corresponding date must have Avani muzhakkam (thunderbolts and no rains)

Another specific feature noticed was that there will be rains in the 1st half of the night on Gokulashtami day. My previous article on this can be read here. This year Gokulashtami / Krishna Jayanthi comes on 3 days. (Explanation here). On all these days there is likely to be rain after nightfall.

The nagging question on how / why  so many days of the impact period of 5th and 6th solar Garbottam days seem to receive rainfall, despite having poor Garbottam on the 5th and 6th solar Garbottam dates, seems to have an answer in the special days of the month. For example if the Garbottam features are good on Arudra day (when Moon conjuncts Arudra), in the month of Maasi, it would rain for 16 days in the impact period starting from the 195th day. The same holds good for Aslesha and Magam in the month of Maasi.

The chart shows average Garbottam on Arudra (Feb 18th) but good to very Garbottam on Aslesha and Magam (Feb 21st and 22nd). They reinforce the 16 day wet period starting from Arudra impact day which is 28th August. The chart shows wet days throughout the impact period after Arudra. Such a long period in my place of observation cannot happen without Chennai coming  in the path of rain clouds. This is not possible without SW monsoon being active.

The foremost feature, Budha- Shukra Sameephyam exists in the following period showing good rainfall in both SW and NE monsoon period of 2016.

Incorporating the other planetary positions, on 9th May retrograde Mercury crosses the Sun backwards thereby making the Sun to be in the lead. This is a good combination for rainfall.

From 10th onwards, Mercury and Venus come behind the Sun. This is good for rainfall. On May 14th, Venus crosses Mercury to take forward lead. Such a feature is a trigger for some rainfall activity. We must watch these dates for any special feature of rainfall.

If we look for precedence for this kind of combination in the past, only year 2012, (from among the last 5 year records available in IMD website) is somewhat closer. In 2012, Rahu was in opposition to a very good combination of Mer-Ven- Sun in Taurus. The opposition of Rahu delayed the rainfall and minimised the rainfall. The quantum of rainfall was less in the first half of the season. On 4th June, the website says, the winds picked up and rainfall occurred from 4th onwards. It was on 4th June Mercury moved away from the opposition and entered Gemini.

Taking cue from this, we can see a similar opposition of main planets of rainfall in opposition to malefics (Sat and Mars) between May 20th and 13th June. This is a period of less rainfall or lull or an indicator of delayed monsoon. From 13th June onwards, rainfall will pick up.

Putting the above in a nutshell:-

14th May – a trigger effect or some phenomenon.

20th May to 13th June – less rainfall (delayed onset of SWM or below normal rains?)

7th July – some phenomenon can be expected as Mercury crosses Sun and start towing behind Venus – good for rainfall.

7th July onwards all planets on one side of the Sun – good rainfall. Similar combination existed during the floods of 2011. This continues till 12th September. (Above normal rainfall?)

7th July to 12th September is an important period of heavy rainfall that could cause floods if 2011 model is reliable.

The morning news on blizzards in Japan and heavy snowfall in Canada, reiterate the validity of Budha- Shukra Sameepyam. Budha - Shukra sameepam ensures good rainfall or similar conditions depending on the season of the year. In winter, it results in cold winds, blizzards and snowfall. This year the cold winds started very late in North America. It must be noted that Budha- Shukra sameepyam was not present in December and started only in mid- January. It started  from 15th January and would last till 24th March. Snowfall started only after 15th January 2016. It seems to be continuing as per today's news. Some part of the globe would be seeing hyper cold conditions until Budha- Shukra sameepyam lasts. Where is it is rainy season, there also it would rain  until this sameepyam lasts.