Will the end of world happen with CERN experiment ?

Media is agog with reports of a speculation of the beginning of the end of the world on when the CERN will launch its experiment on finding out what happened just after the Big-bang.

The experiment is going to take place in an underworld tunnel constructed in . http://public.web.cern.ch/Public/Welcome.html 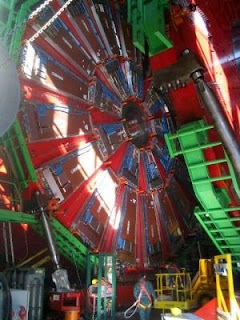 In contrast to 2012 syndrome related to Mayan prediction,

this time the fear psychosis is built from the prediction of Nostradamus.

Since finds a mention in the predictions of Nostradamus,

this experiment happening in has stirred up interest.

The verse indicating disaster for is this:-

Leave, leave every last one of you,
Saturn will be converted from gold to iron,
Raypoz will exterminate all who oppose him,(?)
Before the coming the sky will show signs.

This experiment is even connected to 2012 prediction of the Mayans,

but for the time being, Nostradamus has become the pet author for predictions of sorts.

Why should I lag behind with my limited wisdom(!) of predictive astrology?

So I decided to give my expert (??) comments.

First we must recall the two consecutive eclipses of last month.

The Solar eclipse of was indicative of danger from waters

and since it happened in a movable sign, the results were predicted to happen

within a short time, say, a paksha or two. (paksha is a fortnight)

whose mundane sign of Capricorn was directly in opposition to the eclipse.

The results did happen with in a paksha.

The second eclipse that happened on August 16th was associated

The place where the eclipse ended, namely did experience a massive one within a paksha.

But the period of fructification of results is not yet over

and the countries exposed to this prediction are not out of danger for two more weeks.

CERN experiment coincides with the time period of fructification of the result of this eclipse.

We speak of human rights and cap on nuclear explosions.

Isn’t the current experiment an abuse on earth?

Who will bring a check on experiment such as this?

Generally any damage to earth will be promptly paid back by Nature.

That is the rationale of astrological predictions too.

a counter-reaction in Nature’s way – which we say is indicated by Rahu –dosham.

Looking from theories on digging and its connection to

In the current lunar month of Bhadrapada, Rahu is in the North.

or will yield bad results.

As such, the experiment may not make much headway,

Looking at Human welfare and welfare of the world,

I think it will be apt to consider Aries as the birth sign of the world.

The Kalpa and Chathur yuga started with all planets at zero degrees Aries.

on , it will prove to be the only and the single factor

to control any adverse effect.

It will tame any mischievous act by Saturn and Sun in the 5th house.

In addition, the 8th lord, Mars in 6th with budha-shukra combination

also does not foretell any grave danger to the world.

any abuse to Mother Earth will have its own reactions and repercussions.

I am not a votary of experiments that include abuses to earth.

We have no right to abuse earth.

: If critics are to be believed, the end of the universe will begin coming Wednesday when a Welsh miner's son launches the world's biggest scientific experiment to know how the universe was born.

The well-known Welshman physicist, Lyn Evans, dubbed Evans the Atom, will this week switch on a giant particle accelerator designed to unlock the secrets of the Big Bang.

On Wednesday, Evans will fire up the Large Hadron Collider, a 17-mile-long doughnut-shaped tunnel that will smash sub-atomic particles together at nearly the speed of light.

Built by the European Organisation for Nuclear Research (CERN), the collider lies beneath the French-Swiss border, near the institution's headquarters in , at depths ranging from 170 feet to 600 feet.

The aim of the 4.4 billion-pound (over $7.7 billion) experiment is to recreate the conditions that existed a fraction of a second after the Big Bang - the birth of the universe - and provide vital clues to the building blocks of life.

It will track the spray of particles thrown out by collisions in a search for the elusive Higgs Boson, a theoretical entity that supposedly lends weight, or mass, to the elementary particles. So important is this mysterious substance that it has been called the "God Particle".

Scientists also hope to shed some light on the invisible material that exists between particles - dubbed "dark matter" as no one knows what it really is - which make up most of the universe.

But a handful of scientists believe that the experiment could create a shower of unstable black holes that could "eat" the planet from within, and they are launching last-ditch efforts to halt it in the courts.

One of them, Otto Rossler, a retired German chemist, said he feared the experiment may create a devastating quasar - a mass of energy fuelled by black holes - inside the earth. Jets emanating from it would grow and catastrophes such as earthquakes and tsunamis would occur at the points they emerged from the earth.

"The weather will change completely, wiping out life, and very soon the whole planet will be eaten in a magnificent scenario - if you could watch it from the moon. A Biblical Armageddon. Even cloud and fire will form, as it says in the Bible."

He said that attempts were still being made in the European Court of Human Rights to halt the experiment on the grounds that it violated the right to life. The court has, however, already rejected calls for a temporary delay in the project.

Walter Wagner, an American scientist who has been warning about the dangers of particle accelerators for 20 years, is awaiting a ruling on a lawsuit he filed a fortnight ago in his home state of .

Evans, however, is dismissive of the "doom-mongers".

"There are thousands of scientists around the world who have been preparing this machine and they know what they are talking about, unlike these guys," he is quoted as saying in the Daily Mail.