The scientific Sanatana dharma has many practices some of which can be proven by today's researchers.

The rationale of 'ThoppukkaraNam' is known from the Super Brain yoga.

Similarly some research can be done on the counting of the japa-mala (rosary) on whether the constant movement of the beads in a particular fashion has an effect on activating some nerve centres, as happens in acupressure.


Usually, the thumb and the middle finger are used in rotating the beads. 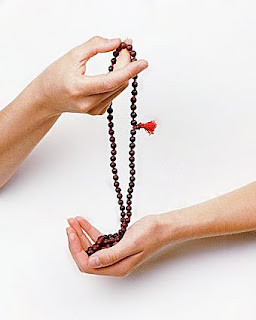 The knowledge of acupressure centers that we know as of now, is that the top phalange of the thumb is connected to brain and that of the middle finger to the nose.


Some people do the japa by sliding the mala on the base of fingers. 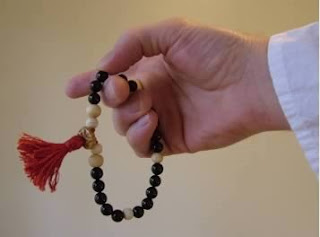 The base of the fingers has relevance to the eye and ear centres. 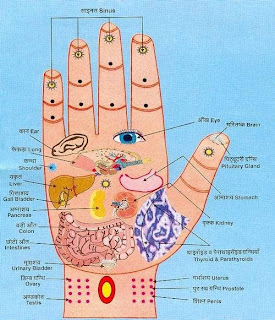 It must be researched how these centres are activated when japa is done using the japa-mala.

Of all the japas, Gayathri manthra japa is considered as supreme.
No japa-mala is used in gayathri japa.
Counting the mantra is done by the thumb moving over the parts of other fingers.
This method has all the trappings acu-pressure in activating some important centres of the body and brain.


In Gayathri japa, the thumb presses certain phalanges of the other fingers in a particlular sequence. 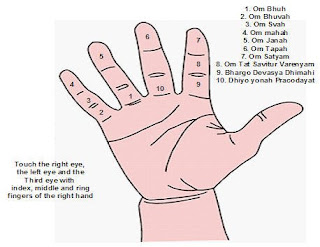 This is also one area of research to ascertain whether any activation of internal power centres is happening by doing like this.


The gayathri manthra is aimed at Enlightenment.

Perhaps the counting activity is an additional feature to buttress the effect of mental awakening.


Another activity that seems to have some curious connection to acupressure is the way achamanam is done.
The 12 names of Bhagawan are recited by touching different body parts in different ways.
The thumb and the fingers and the divisons of the fingers come into contact in a specific fashion while touching the various body parts.


For example it is done like this for 'Keshava'. The index finger touches the second phalange of the thumb while the thumb touches the cheek bone.

Other achamanam pics can be seen here:-

Hope to hear some research on these.
Posted by jayasree at 1:22 PM

sairam.this article is absolutely fantastic and very very useful. i'm a sathya sai balvikas guru and i have one more valid point to make my children chant the gayathri mantra. our ancient glory should be taught to the children with such wonderful reasons so that they will do sandhya vandhanam also with more involvement. may your seva continue. and may god bless you. viji ganesh, chennai.sairam.

Thanks a lot ma'am

i have just gone through this post on acupressure in gayathri japa.

there is a general notion woman should not do gayathri japa can you guide on this??

A person is initiated into Gayathri japa through the sacred thread ceremony. In olden days it is said that women undertook this ceremony. There was sandhya pujas for women. Hanuman waits at Ashoka vana hoping to see Sita come to the waterway to do sandhya puja.

We don not know whether it was the same kind of initiation that men had, because due to monthly periods, women can not do the sandhya pujas continuously. Women may have had a different one with different slokas and methods. Like this there are reasons for omission for women. There are many slokas or japas other than this Gayathri japa, which women or any one can choose from.

My name is madhav.This article is good.I am practising Gayathri regularly.Not only accupressure many techniques like NLP self hypnosis ,apasanasathi ,ELT and water therapy are present in Sandhyavandanam.Recent techniques like GIS and GPS Location finding is similar to Digdevata namaskaram and sankalpa and Rishi pravara reminds DNA and blood relation hierarchy.imean to say that it cares about environment as it contains Havana and Argya .I am planning to carry out research with the above topics.Anganysa and karanyasa ,pranayam also found as new techniques by the so called new age gurus and scientists.