Mr Karunanidhi has appealed to the Lankan Government to treat Mr Prabhakaran, the LTTE chief with respect and dignity just as how Alexander treated Porus!

This appeal is surprising to say the least.

Does this mean that Mr Karunanidhi is foreseeing the defeat of the LTTE chief?

Does he envisage a situation where Mr Prabhakaran would be caught alive- similar to how Saddam was caught from a hide-out – and that he must not be treated and tried like a prisoner but let off like how Alexander let off Porus?

Is he so sure that the LTTE chief, who propagated the culture of his men biting the cyanide capsule if apprehended, himself would not subject himself to the same fate?

What a warrior he would be then if he is to be caught alive and 'treated with dignity'!!!! 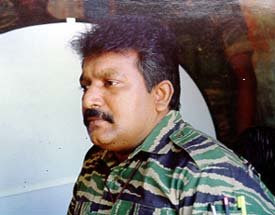 Did Mr Karunanidhi think about all this before making his appeal which has all the trappings of 'Me too in the game, speaking for the LTTE'?

This appeal gets me into thinking of two different issues.

One is about the analogy of Alexander's treatment of Porus.

The other is about the fate of the LTTE Chief, as indicated by his horoscope.

Taking up the first issue,

Mr Karunanidhi as he used to be always, is wrong in his knowledge of history.

He had bungled enough by equating Dravidians with Tamils.

He has also bungled in seeing some 'paguttarivu'

in the story of Alexander winning Porus and letting him off!

Is there logic in thinking that a highly ambitious warrior like Alexander,

who set out on a world tour of aggression,

would give back the kingdom he has won,

to the one from whom he snatched it in a battle ? 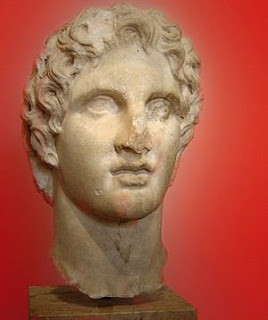 This seems to be the spin of the British masters of those times who,

when coming to know of Alexander's war with Porus,

could not think of a victory for the Indian king.

On the hand, there is some logic in thinking that an Indian (Hindu) king

who was habituated to a dharmic war

defeated Alexander and pardoned him off

coming to know of his ambition and origins.

Such a king could have pardoned him and sent him off

with a friendly hand-shake.

Such a king could have treated him well as an athithi!!

The kind of spurt in exchange of people and thoughts

between Greece and India in the period of and later of Alexander,

goes to show that Porus and other Indians had utilized

the coming of Alexander

for exchange of Thought and culture.

Most of Mlechha principles in astrology are dated back to that period only.

between Indians and Greeks

or that the Greeks had simply learnt from the Indians

and assimilated them in their existing Thought.

The 18 year cycle of eclipses of the nodes

(one round of Rahu-ketu around the zodiac)

was formulated around that time in Greece.

Perhaps their earlier knowledge of observing the eclipses

was added with astrological principles gotten from India.

They probably developed their astrology from this amalgamation,

which later formed the basis of western astrology.

These were also incorporated by Varahamihira later.

Coming to the issue in hand,

it is being agreed nowadays that Alexander did not defeat Porus.

It was Porus who defeated Alexander.

The Karanataka government is said to be making this change in its history books.

When such awareness is developing about our valiant past,

here is our Chief Minister, harping on a questionable version.

But we can not expect him to speak differently.

such as Aryan invasion and equating Tamils with Dravidas

that were meticulously used by him

for brain-washing an entire generation of people!

The second issue is about the horoscope of the LTTE chief.

To read about the factual story of Alexander vs Porus, click the following links:-

Chief minister MKarunanidhi has called upon the Sri Lankan government to treat the LTTE chief Prabhakaran and also the Tamils with due respect and dignity.

"Even if the LTTE is defeated as Mr Rajapaksa desires, he should treat Prabhakaran with due respect and dignity just as Alexander the Great treated King Porus," the chief minister said addressing a huge gathering of the DMK and its allies — the Congress, VCK, TMMK and the public in front of the Chepauk guest house here on Thursday night at the end of a rally taken out to demand an immediate ceasefire in Lanka so as to protect the Tamils there.

"I am not saying this for the sake of Prabhakaran, but I appeal on behalf of the Tamils, even in the event of the LTTE losing the battle, the Lankan government should treat the Tamils as equals and devolve powers to them as envisaged in the Indo-Sri Lanka accord," he said and warned Mr Mahinda Rajapaksa that "history would not forgive him if he wiped out the Tamil race in Lanka." Referring to the resolution passed by AIADMK general secretary Jayalalithaa during her tenure as chief minister, Mr Karunanidhi said if Mr Rajapaksa wanted to go by the Assembly resolution he could extradite Prabhakaran to India (to face trial in former Prime Minister Rajiv Gandhi's assassination case) in case he was captured.

He made a fervent appeal to the UPA chairperson Sonia Gandhi to "protect the Lankan Tamils without brooking delay." Pointing out that the present circumstances were not the same as they were during the tenure of Indira Gandhi as Prime minister (who airdropped food packets), the DMK stalwart said the Centre should act swiftly and safeguard the Tamils.