Court for use of Mimansa principles of interpretation

The Supreme Court has called for liberal use of Mimansa Principles of Interpretation (MPI) in interpreting and understanding the statutes and provisions of law.

A Bench of Justice Markandey Katju and Justice A.K. Ganguly in its order said “MIP which were our traditional principles of interpretation for over 2,500 years, but which are unfortunately ignored in our Courts of law today. It is deeply regrettable that in our Courts of law, lawyers quote Maxwell and Craies but nobody refers to the MPI. Most lawyers would not have even heard of their existence. Today our so-called educated people are largely ignorant about the great intellectual achievements of our ancestors and the intellectual treasury which they have bequeathed us.”

The Bench said “the MPI is part of that great intellectual treasury, but it is distressing to note that apart from the reference to these principles in the judgment of Sir John Edge, the then Chief Justice of Allahabad High Court in Beni Prasad vs. Hardai Bibi, a hundred years ago and in some judgments of one of us [M. Katju, J.] there has been almost no utilisation of these principles even in our own country. Most of the Mimansa Principles are rational and scientific and can be utilized in the legal field.”

The Bench said “the Mimansa Principles were our traditional system of interpretation of legal texts. Although originally they were created for interpreting religious texts [pertaining to the Yagya sacrifice], gradually they came to be utilised for interpreting legal texts and also for interpreting texts on philosophy, grammar, etc. i.e. they became of universal application. Thus, Shankaracharya has used the Mimansa adhikaranas in his bhashya on the Vedanta sutras. There were hundreds of books [all in Sanskrit] written on the subject, though only a few dozens have survived the ravages of time, but even these show how deep our ancestors went into the subject of interpretation.” The Bench in the instant case used MPI to interpret Section 6 of the Land Acquisition Act. The government issued a notification under Section 6 of the LAA and the question arose whether it was barred by limitation or not. The present appeal was against a Bombay High Court judgment rejecting a writ petition against the notification.

Allowing the appeal, the Bench said “In our opinion, when the language of the Statute is plain and clear then the literal rule of interpretation has to be applied and there is ordinarily no scope for consideration of equity, public interest or seeking the intention of the legislature. It is only when the language of the Statute is not clear or ambiguous or there is some conflict etc. or the plain language leads to some absurdity that one can depart from the literal rule of interpretation. In our opinion, the said Notification was clearly barred by limitation.”

Mīmāṃsā, a Sanskrit word meaning "investigation" (compare Greek ἱστορία), is the name of anastika ("orthodox") school of Hindu philosophy whose primary enquiry is into the nature ofdharma based on close hermeneutics of the Vedas. Its core tenets are ritualism (orthopraxy), anti-asceticism and anti-mysticism. The central aim of the school is elucidation of the nature ofdharma, understood as a set ritual obligations and prerogatives to be performed properly.

There is a monument to Sir William Jones, the great eighteenth-century British Orientalist, in the chapel of , . This marble frieze shows Sir William sitting on a chair writing something down on a desk while three Indian traditional scholars squatting in front of him are either interpreting a text or contemplating or reflecting on some problem. 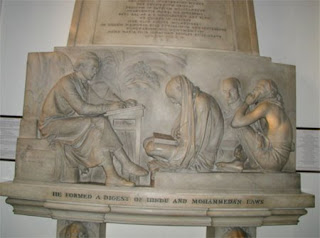 It is well known that for years Jones sat at the feet of learned pandits in to take lessons in Sanskrit grammar, poetics, logic, jurisprudence, and metaphysics. He wrote letters home about how fascinating and yet how complex and demanding was his new learning of these old materials. But this sculpture shows – quite realistically – the Brahmins sitting down below on the floor, slightly crouching and bare-bodied – with no writing implements in their hands (for they knew by heart most of what they were teaching and did not need notes or printed texts!) while the overdressed Jones sits imperiously on a chair writing something at a table. The inscription below hails Jones as the “Justinian of ” because he “formed” a digest of Hindu and Mohammedan laws. The truth is that he translated and interpreted into English a tiny tip of the massive iceberg of ancient Indian Dharmashastra literature along with some Islamic law books. Yet the monument says and shows Jones to be the “law-giver,” and the “native informer” to be the “receiver of knowledge.”

What this amply illustrates is that the semiotics of colonial encounters have – perhaps indelibly – inscribed a profound asymmetry of epistemic prestige upon any future East-West exchange of knowledge. (Arindam Chakrabarti, “Introduction,” Philosophy East & West Volume 51, Number 449-451.)