Make a vow on this Krishna Jayanthi to save the cow.

The thought of Krishna always comes with the cows. Two of the top verses of Divya Prabhandam on Sharanagathi (Surrender to God) and Moksha portray him with cows. One is Andal’s Thiruppavai where she asks Him to accept her surrender and another is her father Periyaazwar’s final verse where he addresses him as an Ayan (Yadava) by praising whom one attains Moksha.

This means “as one born in a kulam where you eat after making sure that the cows are fed well, you cannot afford to reject our appeal to serve you” 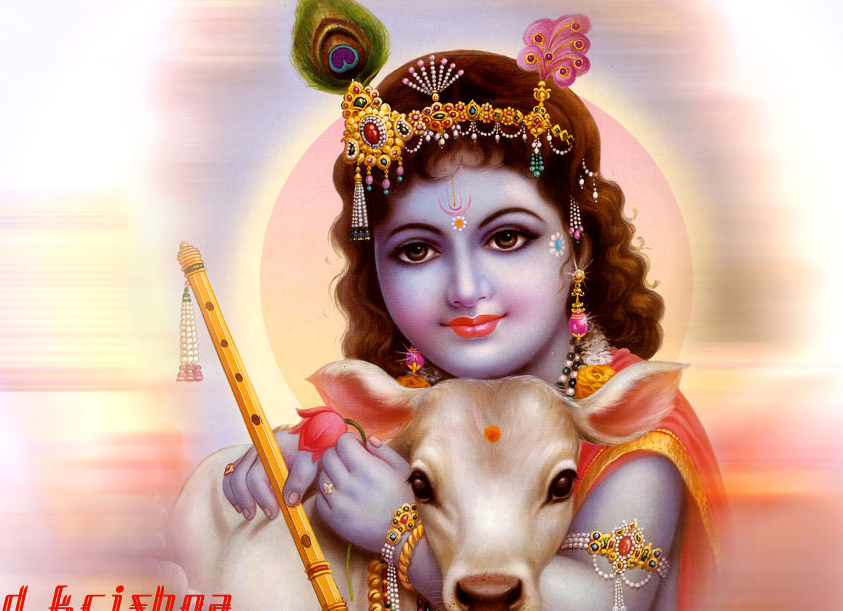 Why Andal makes this reference to the cows being fed before taking one’s own meal?

The cows are in lower rung than humans. But the Yadava man would make sure that the cows eat first and then only he would fill his own stomach. Krishna was born such a Kulam in a kind of symbolism for his role via-a-via his devotees. He would not and cannot rest until he has overseen that his devotees’ requirements are met. The cows and we people are on the same boat by this comparison and which is also true.

Our food does not come to us as a charity from Sonia but because of the grace of God by whom our karmic obstacles are removed and we get our food. It is because of this reason the kitchen is known as “Thiru maa-p- padi (திருமாப்படி) in Vaishnavite’s homes. It is He who decides how much we get to eat – He is the Padi – aLappavan (படி அளப்பவன்) – a term we come across in temple inscriptions and Bhakthi literature. One can refer to Thiruvaluvar too on “Marunthu” chapter where he says food is the medicine and because mistakes in food gives rise to diseases, giving / donating food is considered as a medicine which offers a release from bad Karma (bad karma gives rise to diseases).

The basic and first food is milk and the cow that gives that milk is mother of all people. Krishna was born in a Kulam that took up the responsibility of giving food to the cows themselves. That symbolism is reflected in Periyazwar’s last 10 pasurams starting with “Senni Ongu” where he calls the Almighty who offers Moksha as “Ayar ERu” (ஆயரேறு).

He is the one who protects the giver of food to all humans. The saddest fact of today is that giver has been made into a food in our country where killing a cow is equated to killing one’s own mother and father. Most inscriptions on donations found in our country make a declaration that those who obstruct or appropriate the donation would incur the sin that one gets for killing a cow or killing one’s mother and father.

In such land of ours, cows are being killed for food. Many articles have been posted in this blog in the past condemning this dastardly act, but today I am bringing to the notice of readers a noble soul who is engaged in saving the cows that are taken to slaughter houses and providing them shelter and medical treatment.

Yesterday’s Kumudam Jothidam carried a lead article on his service which the writer Sri AMR had written after visiting the Goshaala maintained by him. It was a moving article in which Sri AMR had a raised a pertinent question on cow traffickers. Didn’t these people have any other business than this trafficking?

Publishing here some of pics of the cows and buffaloes that had been rescued from those murderers. 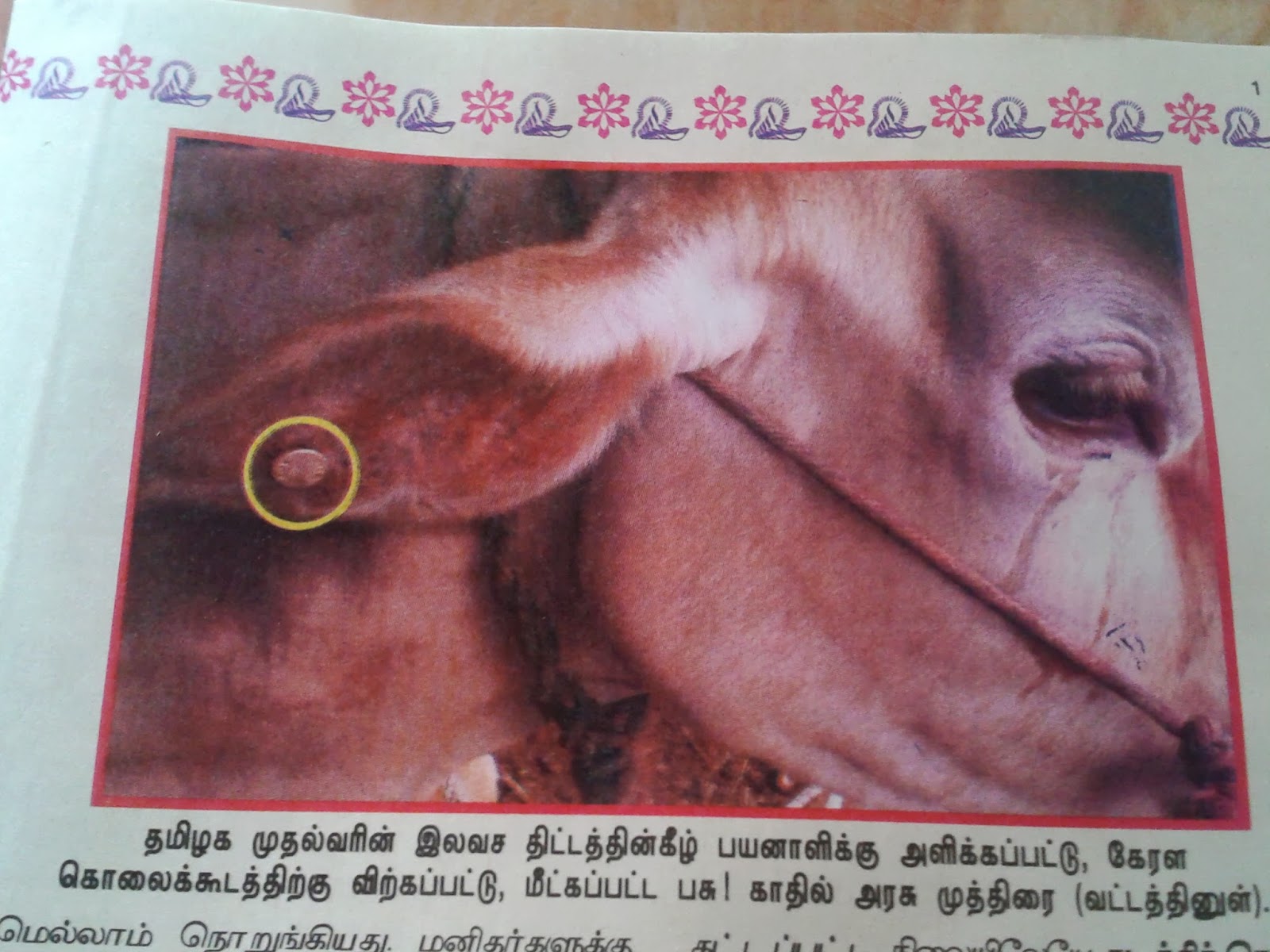 This cow was actually given free under Jayalalithaa’s scheme of free cows to develop individual’s and rural economy. The mark within the circle shows that this cow was given under that scheme. 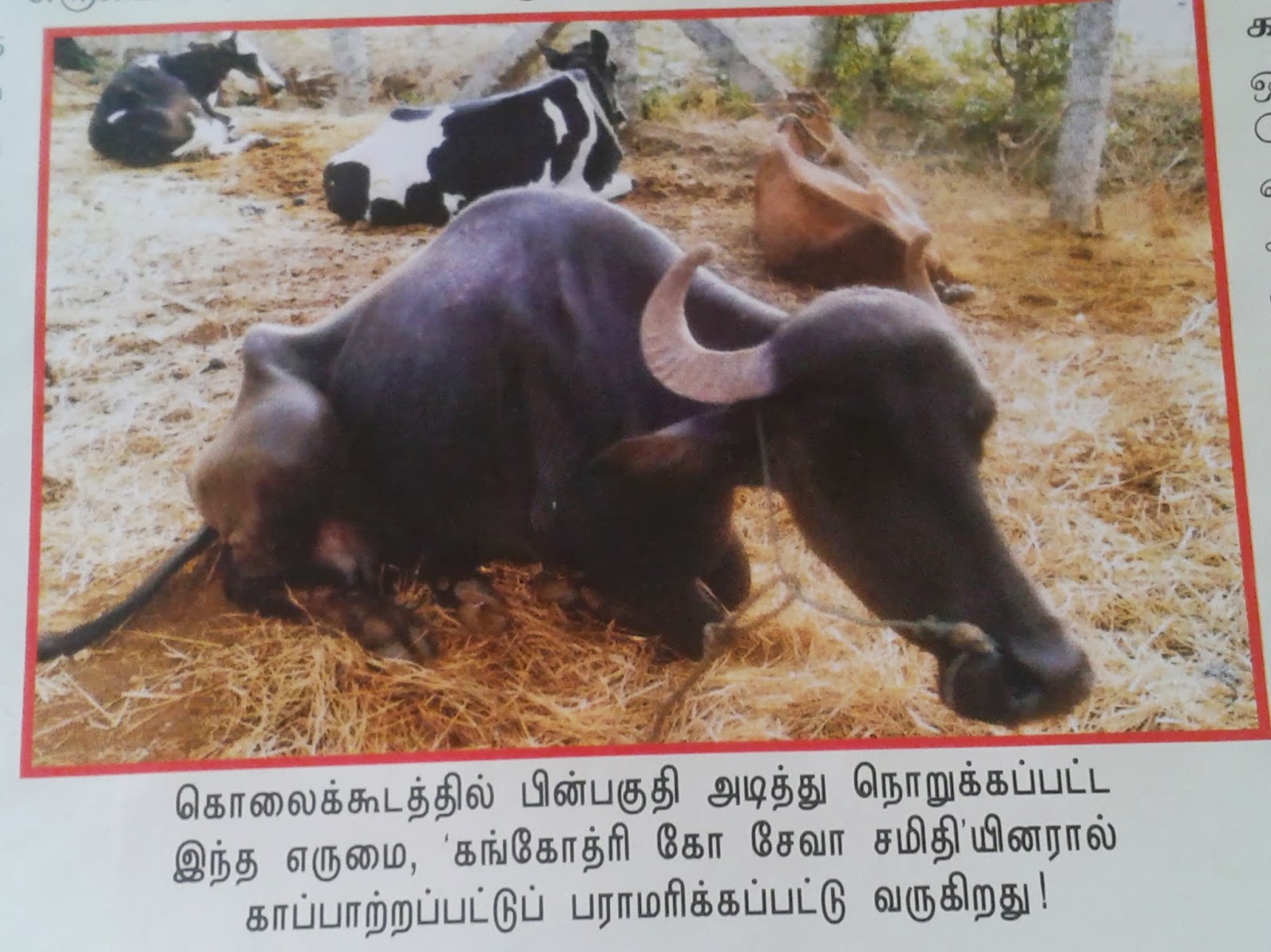 This buffalo was beaten at the back very badly while transiting it to the slaughter house in Kerala. This was rescued and given treatment, but the damage to the back is beyond redemption. 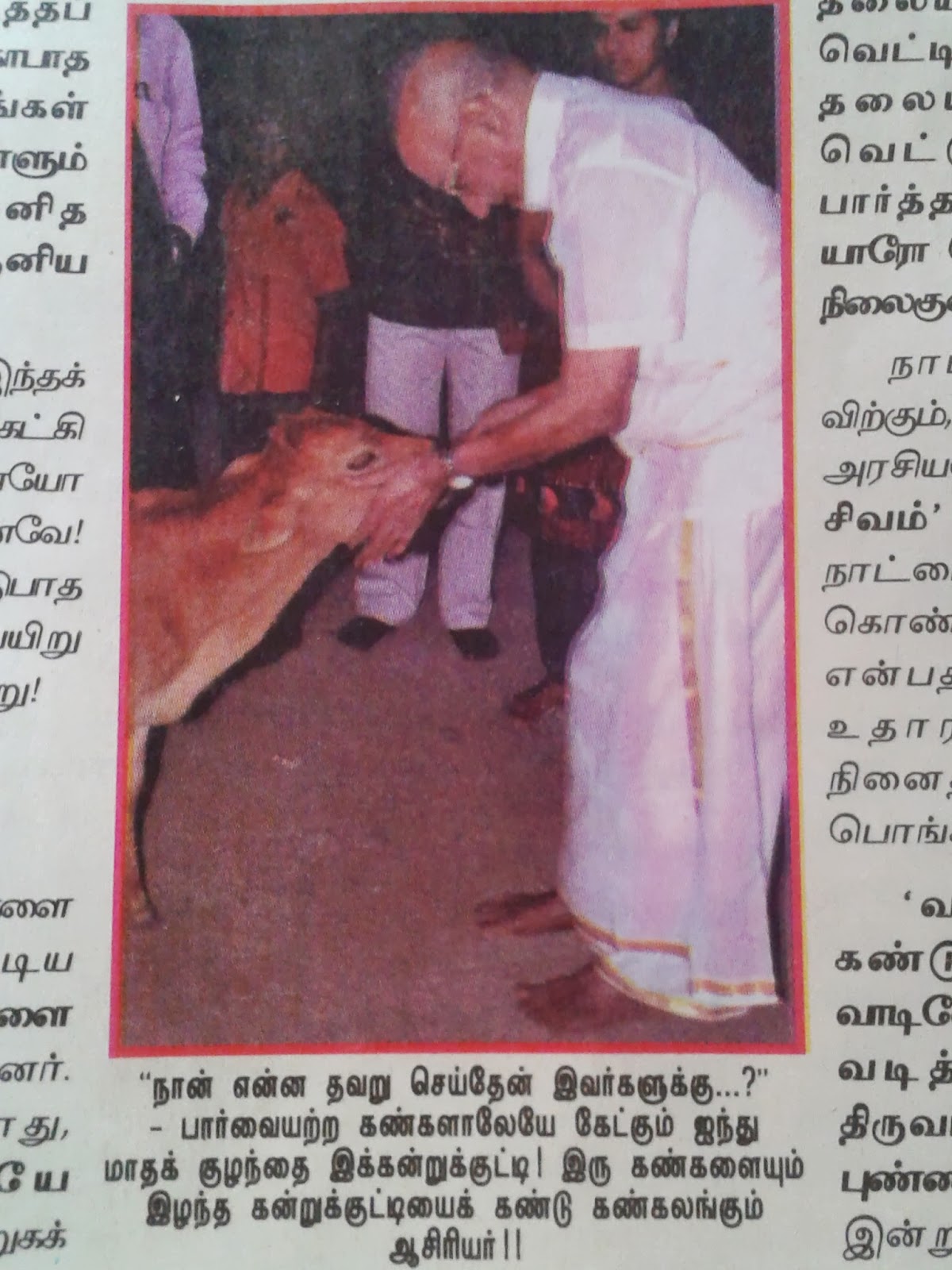 Sri AMR with a rescued calf. 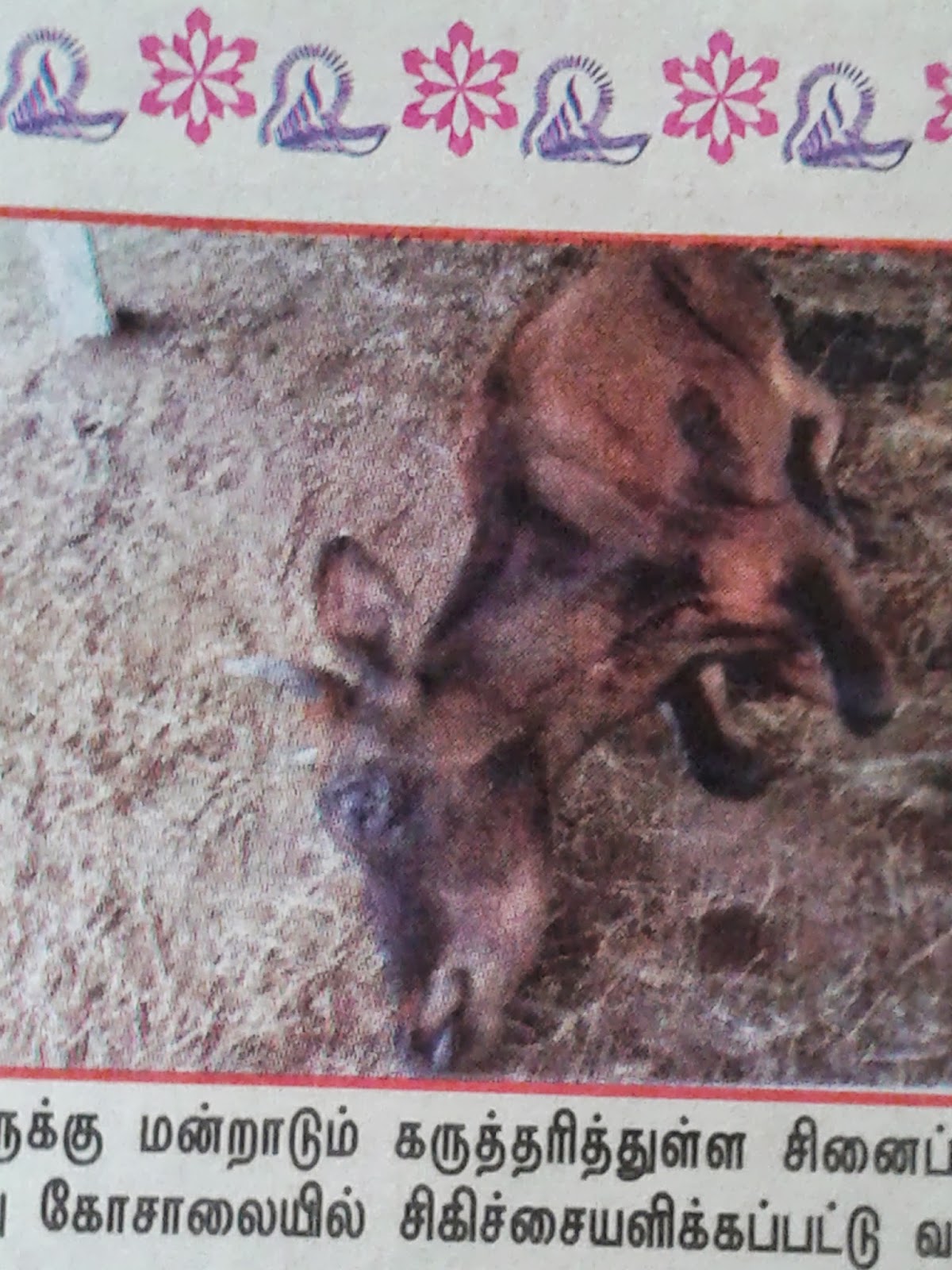 A pregnant cow,  rescued and under treatment. 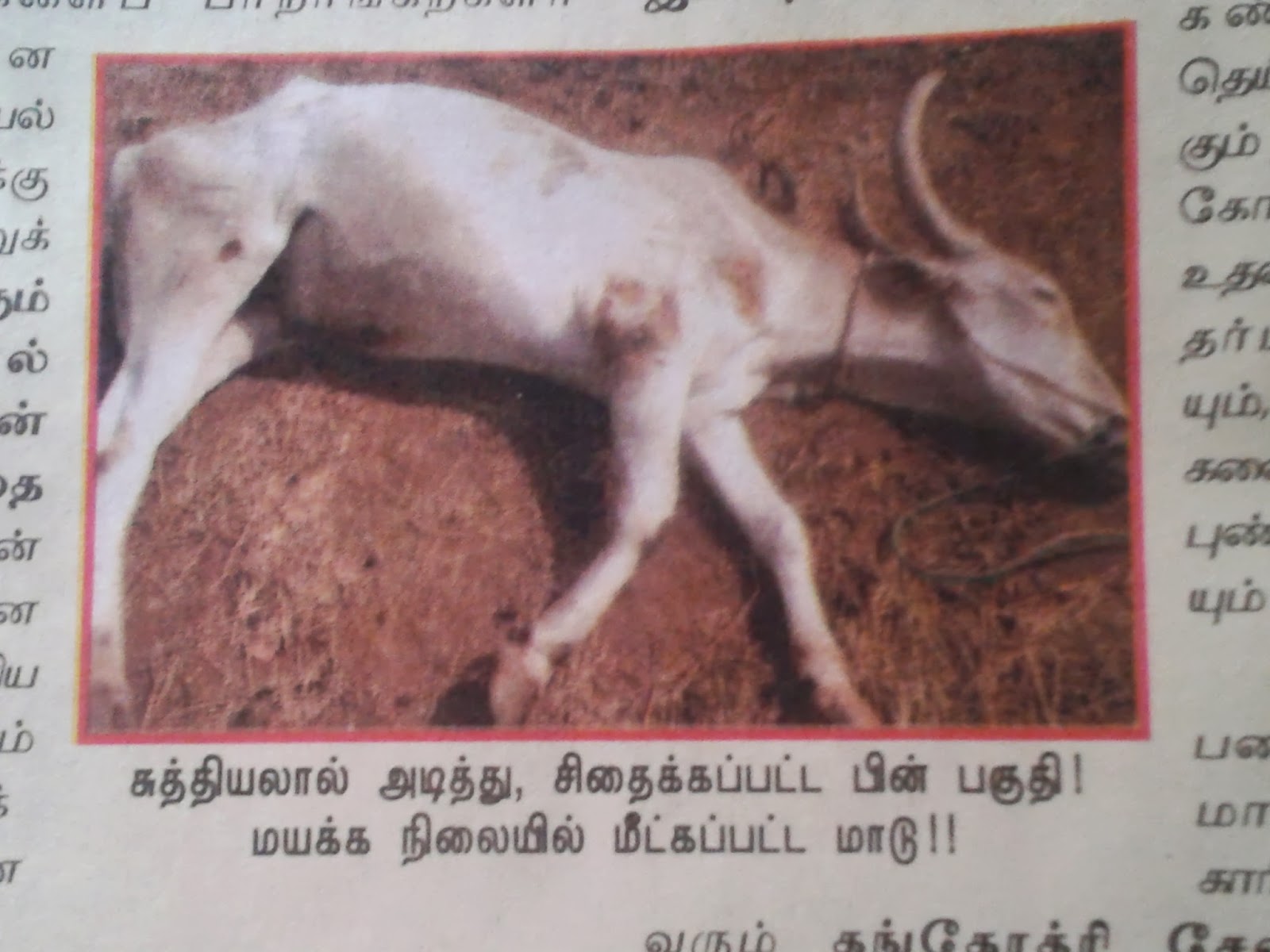 A rescued cattle yet to recover.

These cattle are being taken care of by one Mr Iyappan in Tirupur of Tamilnadu.
He had personally stopped 2 lorries carrying the cattle and rescued the animals. In one of the attempts, he was attacked with a sickle and has since recovered. 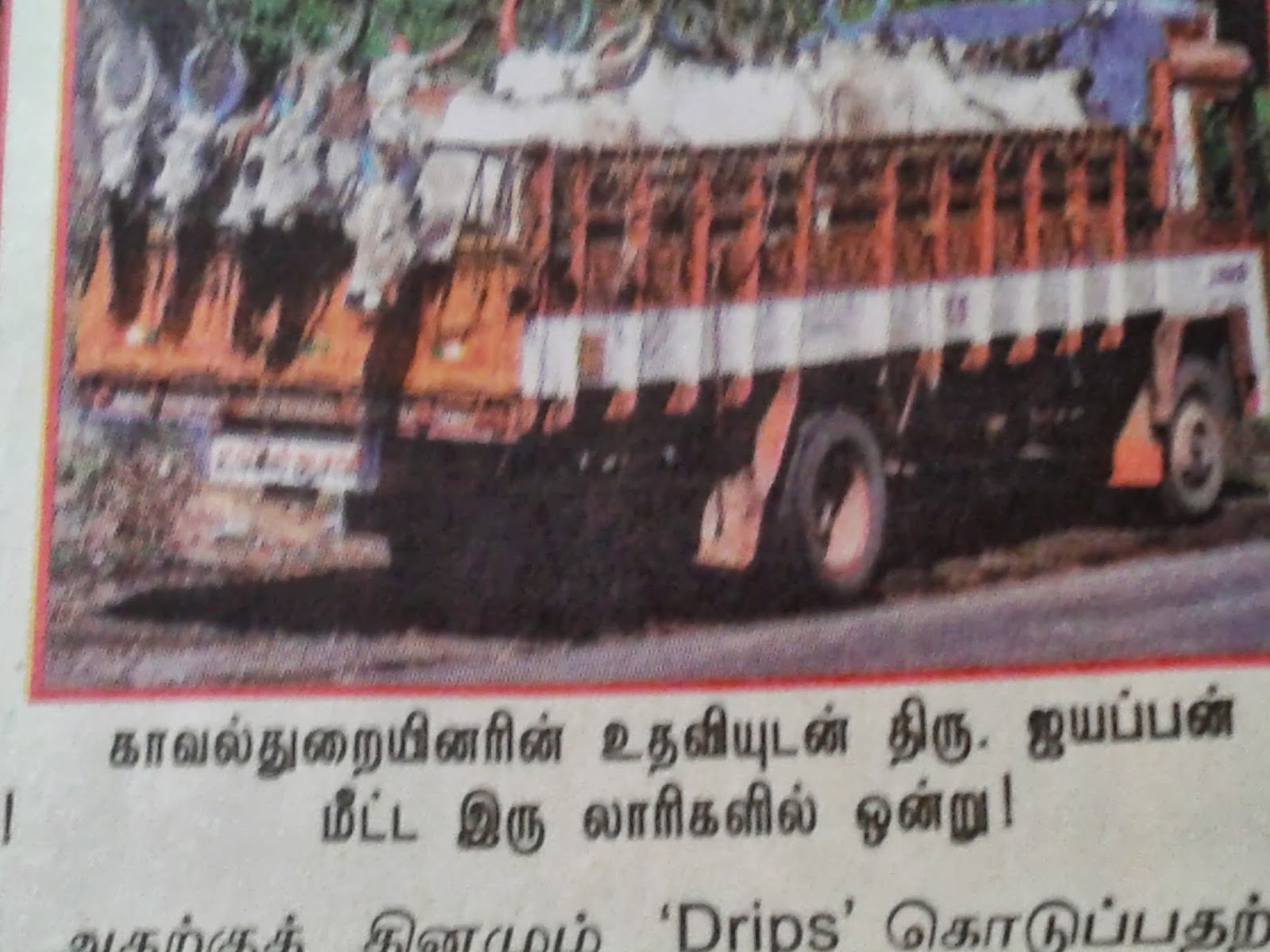 Donating a cow or feeding a cow is one of the foremost pariharas (propitiations) told in astrology when Sun or moon or Jupiter are afflicted in one’s horoscope. This parihara is also told for Preta shpa, Sarpa dosha and curse of women and brothers. I used to tell people in such circumstances to donate a cow to a Veda Patashala or feed any cow that they see in their surroundings with banana or spinach. Now I think I can ask them to contribute their mite towards the medical expenses and upkeep of the cattle that have been rescued from slaughter houses.

One of the issues raised by the police in rescuing the cattle is where to house them or what to do with them after the rescue. It is here that people like Mr Iyappan must be supported by all of us. By helping persons like him in the treatment and upkeep of these cattle, we would be doing our part in some small way. I would say that even those who are looking for suitable recipients for donation as an astrological remedy, can help these cattle that need attention.

From AMR’s article, I am furnishing the address of Mr Iyappan who is doing this noble service through a Trust called “Gangothri Seva Samithi”

He can be contacted at the following address.

On this day of Krishna Jayanthi, let us make a vow that we protect the cows from slaughter. Service to the cows  means service to Krishna.

On sacredness of cow and against animal slaughter (by Subramanian Swamy)

Gandhiji on proselytization and cow slaughter

Save the cow - stop Cattle Trafficking to Kerala.

thanks for this post on Sri Jayanthi. its our duty to create awareness in desi cow protection. those who donate cows should include maintainence and monitor the cows periodically than thinking as onetime affair.

oflate i have also taken interest in local temple goshala, we have made a community of like minded friends to help milkmen with desicows & goshala . we pooled resource to collect vegetable peels, greens to feed cows which otherwise go as waste.

Happiness & satisfaction in serving cows is to be experienced

Along with this post, for on line remittance, details like bank account details - name of the bank, name of the branch, name of account holder, account number, Code Number - are also provided, it would be helpful for me to make my contribution.

//Happiness & satisfaction in serving cows is to be experienced//

Very true. Nice to know that you are feeding the cow in some way. May your tribe grow.


Cows are saatvic and an embodiment of Shuddha satva. If a person spends his time near cows, he too starts developing saatvic tendencies. The Gothra was infact a derived idea from Go-shaala where the rishis spent their time. River Yamuna was known as "Thozunai" in Tamil which means Gothra or the home of cows. I have written about this in my Tamil blog on Indus streets that look like Brindavan streets.

My comment in that article on my experience in Shreenath Dwaraka on the occasion of Govardhan puja :

I have given the mobile numbers of Mr Iyyappan in the article. Please contact him and do the needful.

Thank you for your immediate response. Personally visiting a bank, making out a DD and then reaching out to Post Office for mailing the DD are all cumbersome process and in these days of time conscious and time priority management, our noble and spontaneous response to contribute normally take a back seat. Hence I proposed availability of on line remittance details would help and serve our immediate purpose. However, as advised by you, I contacted immediately Mr Iyyappan and requested him to provide the details. Understand from him that he has made application for opening an account in the name of the trust and this would be completed in about a week or ten days’ time. After this, he has assured me that he would get in touch with me.

Thanks for this opportunity to interact.

Good to know this from you. This Goshala was personally visited by Sri AMR and written by him in the latest issue. If any further interaction are there, kindly share with us in this blog for everyone to know.


Thanks Jayasreeji
I have posted it on my fb page.

I would like to introduce another organization that does similar activity. They recently rescued lot of cows. It is People for Cattles In India. The facebook page link give more information

Jayasree Madam
Very nice article. Our heritage and system had strong relationship with animal for thousands of years. Cows are such a nice animals.

I know one event, where an ox broke the leash and ran all the way back to his previous owner, brought him to rescue & save current owner. The current owner's house was set to fire and locked outside by a competitor. It is inhuman to kill such animals.

The below is http://www.panachallenge.com/challenge/show_entry.php?entry=8159&challenge=142 my photo, I took on my pilgrimage with B R Haran ji. When I took photo, the goon in the top of truck showed flash light to find out what we are doing.

Thanks for the link Mr Skandan. Donors may get in touch with them.

Thanks Mr Kargil Jay for the link. Kudos to your courage in taking that pic.

Even though not many of us are capable of stopping a lorry trafficking the cattle while we spot it on a highway travel, a timely click by the camera of the lorry no could help. If readers could get us the contact numbers of persons or organizations working on rescue of these cattle, we can immediately call them up upon citing these vehicles on our way. We can store those numbers in our mobile permanently and alert the people immediately.