The unfolding of the real Kejriwal. 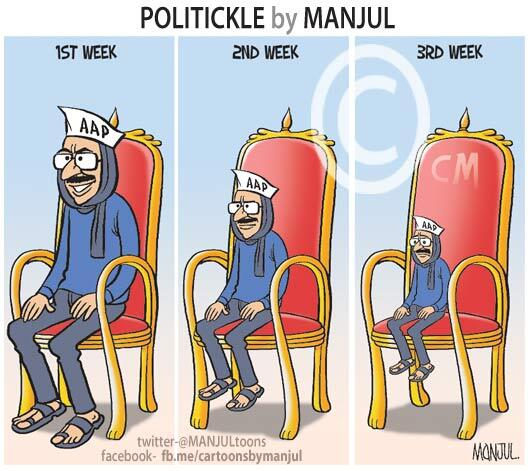 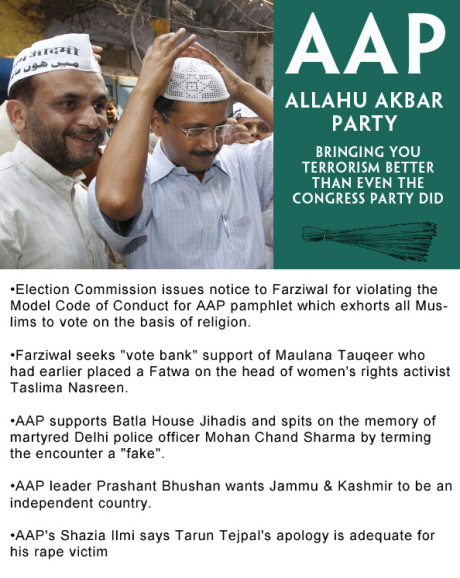 By
S. Pushpavanam
(The writer is secretary of the Consumer Protection Council, Tamil Nadu, and is based in Tiruchirapalli.)

Strange things without any rational basis can happen in a nation of 128 crore people. Now, Arvind Kejriwal is projected as an "honest and different politician" who fights evil. Only when the electronic media calm down will his real face emerge.

Consider how he got out of government service. While serving as a Joint Commissioner in the Revenue Department (Income Tax) under the Finance Ministry, he went on a sabbatical (paid leave) from November 1, 2000 to October 31, 2002, and went abroad. One condition for such leave is that the employee must serve continuously for at least three years after return, failing which he or she must pay back the salary he drew over two years with penalty.

There is a bond to be executed, with witnesses and guarantors. Mr. Kejriwal re-joined duty on November 1, 2002 but at once went on 18 months' leave without pay: he did not serve continuously. He resigned in February 2006. As he had jumped bond, his resignation was not accepted.

The Income Tax Department sent him a notice in 2007 and again in 2008 asking him to pay up. Mr. Kejriwal, who was by then appearing on TV almost every day, expected the government to budge. He said the government could deduct the dues from his retirement benefits; as he had done no wrong, his dues must be waived. After sending a notice on August 5, the department sent another in September asking him to pay up before October 27, 2011 — failing which he would not be relieved and he would not get his retirement benefits.

Attachment of his property and criminal action could follow. Mr. Kejriwal termed it an attempt to create obstacles to his agitation against corruption. When he did not respond by October 27, the department asked his guarantors to pay. Mr. Kejriwal pleaded his friends should not be disturbed. When it became clear the government would initiate proceedings, he announced on October 30, 2011 that he would borrow from his friends and pay the dues of Rs.9.28 lakh. He wrote to Prime Minister Manmohan Singh on November 3, 2011 enclosing the cheque.
Certain things tend to be forgotten amid the din. An impression has been created that the Aam Aadmi Party enjoys the support of 2.2 crore Delhiites. It got only 29 per cent of the votes. That means 71 per cent of voters rejected it.

The AAP laid 18 conditions to get Congress support, some of them mere administrative actions like removing red beacons from vehicles. He said he had written to the BJP and the Congress on these, and once he got replies he would go to the people and ask them what to do. However, the Congress did not accept the conditions. Yet, the AAP formed the government with Congress support.

It is doubtful whether the schemes announced by AAP can be implemented. The Delhi government has a deficit of Rs.1,725 crore. After announcing a 50 per cent reduction in power tariff, he announced it was only under consideration. He had asked people not to pay power bills. Many did not, and faced power theft cases. If Mr. Kejriwal withdraws the cases that would be a bad precedent; no court will permit that. If he does not, his followers will feel victimised. While he promised 700 litres of water per capita, residents in many areas now beg for at least 20 litres. Only 68 per cent of households have piped water supply.

Mr. Kejriwal is known for his sensational announcements. During a first round of fasting action, he said he would expose corruption by 15 Union Ministers. In December 2013 he said he had proof to show five Ministers had Swiss bank accounts. He said in November 2012 the Central government had a list of 700 Indians who had stashed money in HSBC Bank in Geneva, and demanded that foreign banks give all the names to the government; he asked HSBC Bank's staff members in India to resign.

The most popular of his stunts was restoring power connections severed for non-payment as he felt the tariff was high. As cameramen clicked away, with a pair of cutting pliers he connected the wires on June 27, 2013. Although it was an offence under the Electricity Act, the electricity authorities did not act fearing his TV-based backing. He chose to take law into his hands, sending a message that he did not believe in a democratic way of functioning. This is in tune with his other activities like offering dharna in front of the Prime Minister's house, violating orders under Section 144.

What Mr. Kejriwal has done, has been done by so many other politicians. Prashant Bhushan of the AAP wanted a referendum held in Kashmir to determine people's opinion on the presence of the Army. Mr. Kejriwal said it was Mr. Bhushan's personal opinion but the consent of local citizens must be ascertained. But there is no difference between a referendum and getting people's consent. On January 12, Mr. Bhushan said the police must be withdrawn from Naxalite-hit areas.

Mr. Kejriwal is yet another politician who has resorted to politics as his last refuge. I wonder if Meera Sanyal, V. Balakrishnan and Captain Gopinath have done their due diligence before joining the AAP.

Please throw some light on AP division and horoscope.. know that you posted something earlier.. but said if not by feb wont happen but the thing is the bill is approved in feb and the process will start in june so still any chance?

Can you give me the link of the article where I said so. I am not able to search it for lack of time. I remember having predicted that split would anyway happen.

yeash thats correct. Also if you dont mu=ind can you please do analysis on TDP party horoscope and chandra babu naidu i believe that's critical for development of andhra pradesh. Also can andhra pradesh ever achieve development in coming 5 years and be ahead of telanaga?? I am so eager.. Also while providing your astrological analysis you says rahu 2nd house amma 3rd house karunanidhi 4th house.. we don't know that much detail after that you can please summarize like as they are in those houses, he will earn money, earn fame, be a leader like that. Also why all your posts are too long...?? possible to provide summarized explanation along with detailed...I usally follow your posts, bookmarked your time.. but this was my 3rd time or so i think posting my comment to your blog.

For TDP, Chandra babu and Andhra / Seemandhra formation, we have to have birth time horoscopes. I think on Seemandhra we have to wait till it is officially formed.

For the rest of the ideas in your comment, I don't know what to say.

On length of the articles, I am not writing for entertaining or for an audience expecting more readers to come to me. I am writing down what I know. It is like keeping on record what I conceive which may be of interest to someone looking for them.

TDP was formed on March 1982 at 2.30 does the part coming to power depends on chandra babu horoscope or you need both.. If possible can you please provide the chances of TDP in Andhra pradesh and in Telangana this coming 2014 election based on the TDP birth chart. Hope it truimphs in telangana tooo..

ooh by the way the location of the formation of TDP was hyderabad.

The data is insufficient. No date and no clue of pm or am.

I think you mean Hyderabad.

Have I given you the good news?! Personally I never hurt anyone - at least knowingly and expect people to reciprocate the same. On issues like the one you asked I can not say what is not there. Anyway what I wrote must have made you happy. By the way are you such a die-hard fan of TDP?

hi --
Thanks for your time. To make things a little complicate for you. Do you see TDP coming to power in Andhra Pradesh in 2014 or it depends on the time of election. I can take even NO as answer. Please provide the correct answer with the help of your astrological tools/texts.
Coming to my Fanism. TDP is/was and will always be a better option than any congress.
I grew up seeing TDP banners/flags in my house. Didn't cared much when the party was in power and didn't voted in 2004 and now after TDP lost power in 2004 & again in 2009 my interest increased 10 folds, there was even a period when i stopped watching our state political just because congress and their ways are too much for me.

Your question is similar to the question on who becomes the PM in the national scenario. There is no objective tool of analysis in astrology for that.

Hi ---- Irrespective of the current subject. Just wanted to ask whether you know astrologer... Mr. K. V. Gopalkrishnan.... As i came across his predictions... Is the prediction really from him and can it be taken granted..

Prediction by astrologer cum numerologist of Chennai Mr. K. V. Gopalkrishnan...who is known for predicting election results...every year.......
Lok Sabha 2014 - Read on :
Mr. K. V. Gopalkrishnan has announced his astonishing predictions and declared that BJP nominated Narendra Modi will be the next Prime Minister of India. His predictions:
1. BJP and NDA will get 286 seats and Congress / UPA will get less than 100 seats
2. This will be the worst show by the Congress party in the history of India
3. The Congress party will get only 63 seats
4. Two stalwarts will lose the elections
5. Mamata Bannerji, Jaylalilthaa and Navin Patnaik will support Narendra Modi
6. Modi effect will rule the Share market and Sensex will reach to 25000 after 13th June
7. Commodity market will crash and the prices of food and real estate will go down
8. The prices of gold, silver and iron will go down
9. Education sector will see great and revolutionary changes
Mr. Gopalkrishnan has also suggested auspicious time for Narendra Modi. If Narendra Modi takes oath as the Prime Minister on 25th May at 11:41 AM or on 27th May at 10:34 AM, he will rule India for 10 years and this will be a golden period of our country
@(~, " ,~)@
))
((

Welcome back! Your insights were sorely missed.
Could you please let us know if you revisited the horoscopes of Kejriwal and AAP. He seems to be gaining popularity, without having done much other than drama. Do you think he will be a strong contender for the PM's post in near future?