This 11th day is an important one as it is the day of Purvashada (Pooradam). Moon entered Purvashada around noon and is going to be there till noon on the 12th day (10th January 2016). Uttrashada (utthradam) that comes after this also is very important. In the month of Margazhi if the Garbottam signs are good when Moon is transiting Purvashada and Utthrashada, there will be abundant rains in the corresponding 195th day and it would even continue for several days after that. But it all depends on good Garbottam signs on the days Moon is crossing these stars.

By the time Moon entered Purvashada, Venus has crossed Saturn and was forward to Saturn. Moon entered into conjunction with Sun around 8 AM, a few hours before noon this day.
The change in the atmospherics was palpable from noon.

Tracing the Garbottam signs from the beginning of the 11th day, the night time of the 11th day was still but cool. The stars were faint spots of white. The day broke with brightness and less of reddishness at pre-dawn. This is a negative feature. The clouds were found shattered in the morning, but by 8 AM, a few bunches of clouds were seen swimming across here and there. 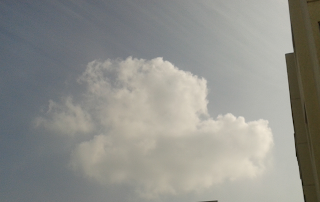 This cloud spotted at 8 AM could have formed into a duck but, it’s very presence elated me as this sighting came nearly after 20 hours. For the past 20 hours, I could not spot any bulky one with some shape resembling an aquatic animal even remotely.
Most clouds looked shattered like this only: (pic below) 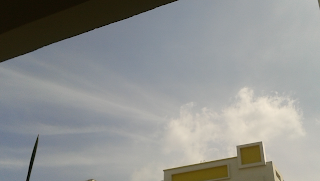 Long streaks of clouds are good but the long streaks in this pic were in fact thin traces of clouds brushed away by wind. Not a healthy Garbottam.

The following was taken just before noon.

It shows that clouds were indeed forming but not in full strength.
By Noon I became curious and anxious too that I must capture some favourable features. The clouds were not showing up in bulk and with halo as it were on 8th and 9th days. The clouds seem to have been scorched, but there were clouds around the sun.

The Sun looked different at 3 different times. But none of them could match the Sun with glowing clouds seen on 8th and 9th day. 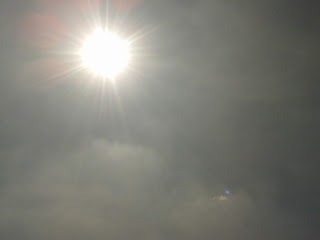 Is there are garland of halo around the Sun? Look at the clouds. They were lacklustre. No glow on their borders. 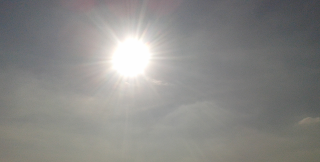 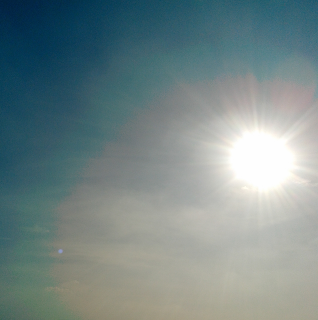 Is there a huge halo around the Sun?
The sun with a glow and a halo is a good feature of Garbottam.

At sun set the sun turned red and presented a beautiful twilight. 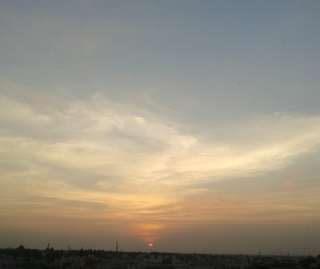 The sky in the east opposite to the time of sunset looked as follows: 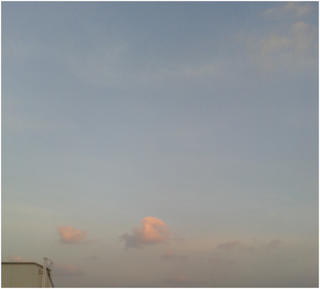 Less bunches of clouds, but a mal-formed duck or stork reflecting the western glow.
The day of Pooradam which must see active movement of crowded clouds was disappointing. But the sky was not totally empty. Some activity was there in the sky.

Relating this day to the 195th day which falls on 19th July, the fortnight following 19th July must see rains as per 3rd day Garbottam. This gives me hope that tomorrow, (12th day) with Utthradam would and must see good signs of Garbottam. And that is my last hope too. For, we are left with only one day after that. The observation so far has not shown a consistent and bountiful season of rains for my place of observation. The next 2 days are going to see good planetary combinations for rainfall. That must benefit my place of observation in the suburb of Chennai. That is my prayer too.

The observation of the 5 factors for day-11 are as follows:

(1) Wind:- Gentle breeze was felt often.  The direction was from north and east
Result:-  Good feature of Garbottam

A vague image of stork sighted at 3 PM. 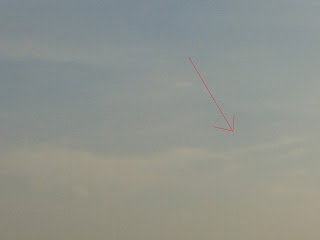 Result:- A fight between mis-carriage and recovery. Garbottam features are average.

(2) Atmospheric :- Of the 12 features noted in my blog on Garbottam, (1) gentle breeze (2) Halo around the Sun (3) clouds near horizon looking blue in colour.

(3) Planetary:- (1) Planets and stars appeared pale. (2) Except Jupiter all the other planets were in Southern declinations. Planets in northern declinations are desirable. (3) Sun was red in colour at the time of sun set.

195th day impact:- Not much rains can be expected though it may rain mildly at night time.

The impact on the corresponding fortnight (6th November to 19th November) in my place of observation:- There may be isolated rains in Chennai in the 2nd half of the fortnight.

NE Monsoon:-  On 6th November 2016, Moon will be in Utthradam and aspects it own house, Cancer, a watery sign. Moon will be in its own Navamsa at that time. It joins Mars which is also in Utthradam at that time. Mars has by then moved to an alternate sign from Saturn. And Sun is going to join Saturn on 16th November. That is the beginning of the month of Karthigai. Until 11th December this combination is going to be there. The past records show that this combination gives bountiful rains. With Mars in the lead, cyclonic storms can be expected.

Anyway NE Monsoon would be active elsewhere for the corresponding 2 fortnights.