The Garbottam observation is becoming interesting as far as I am concerned. We had a 13 day Garbottam based on solar movement between 29th December 2015 and 11th January 2016 and a day-to-day observation of Garbottam. The former represents a fortnight and the later a single day that comes after 195 days. What we interpret from the solar Garbottam for a fortnight must match with the daily prediction as the days progress. Today’s observation would have an impact from the evening of 15th August till 16th August. The impact period for a fortnight for the 5th day of Garbottam (Solar) also starts on these days in August.

The 5th day of Garbottam had practically no positive Garbottam features but stood out on 2 counts, (1) hot air at day time with hot winds (not gentle) blowing around noon while the night time air was still. The clouds seemed to have vaporised but looked to be present in the horizon all around. (2) Moon was in exact conjunction with malefic Mars on this date (2nd and 3rd January 2016). Conjunction of moon with a malefic is supposed to give storms or thunder showers. The ferocity of the wind will be the basic feature of this combination. 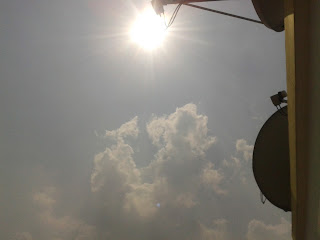 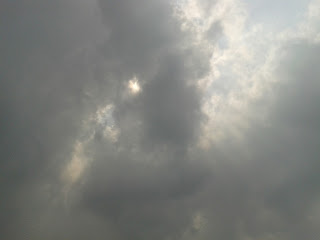 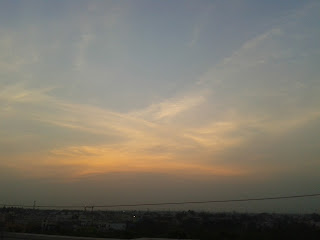 By the time Pooradam began, the climate changed further. There were beautiful huge greyish clouds seen since dawn. But by 8 AM, there was a pale whitish cover of cloud everywhere, not the kind of cumulous and aquatic ones. 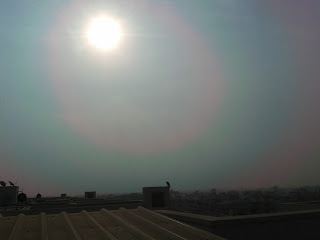 The cloud cover was like a sheet as the day progressed. At 10 AM the sky looked as below. 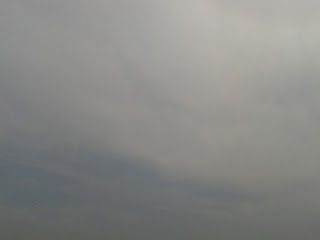 The Sun was a bright disc peeping through the clouds. 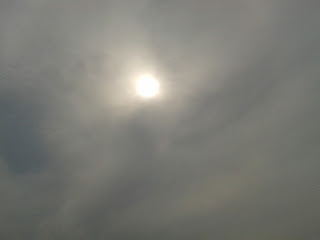 As day progressed the Sun can be seen with a huge halo around it. Sun and moon with a halo is a good feature of Garbottam to happen in the month of Thai.
In the picture below, there is cloud everywhere. Sun is actually hidden behind the clouds. 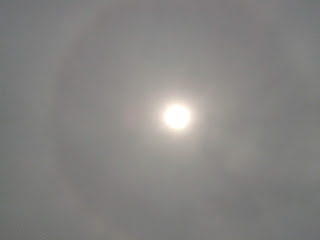 The sun with the clouds is a different looking one for the first time I started observing since 29th December 2015. The meteorological combinations making these appearances are different today.

The corresponding 195th day is 15th and 16th August. Add to it 14th August also  as the formation had its beginning since yesterday.

These dates coinciding with the dates of the new fortnight for the 5th day of Garbottam, begins with all the planets in front of the Sun which is a very good Rainfall yoga. There is no marring presence of planets in stars at that time as per Sapta Nadi Chakra. The closeness between Venus and Mercury continues. But Mercury will be in front of Venus giving rise to a wind factor. Rahu conjuncts with Venus on that date (16th August). These features ensure good rainfall at that time. That is why I wrote on the 5th Garbottam day that SW Monsoon will proceed well at that time.

But the Garbottam in my place, though looked different and deficient on the 5th day of Garbottam (2nd and 3rd January 2016), seems to indicate a different climatic condition when  observed today and yesterday for its 195th day impact on 15th and 16th of August.

To check what is happening, why there is a sudden surge of clouds and why the sun looks  different by radiating what we call “Oomai veyil” (ஊமை வெய்யில்) with a mild breeze, I checked the weather map of today. It shows some quick formation of clouds moving from south west to North east and going as far as China. 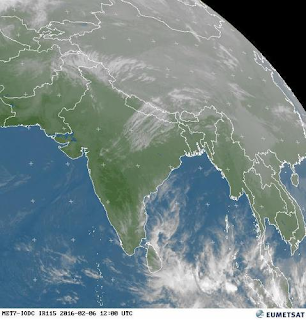 METEOSAT 7
Thermal infrared image of METEOSAT 7 taken from a geostationary orbit about 36,000 km above the equator. The images are taken on a half-hourly basis. The temperature is interpreted by grayscale values. Cold objects are white and hot surfaces appear black. High clouds as thin cirrus or deep convection, for example towering thunderstorm cells, appear bright white. Mid- or low level clouds, as well as fog and mist are 'grayish'. So are cold land surfaces and most ocean areas. As the sun is heating the ground, the surface will appear increasingly dark.
The 'beauty' of thermal infrared images is that they provide information on cloud cover and the temperature of air masses even during night-time, while visible satellite imagery is restricted to daylight hours.
However, the best method to interpret satellite images is to view visible and infrared imagery together.

Chennai, some parts of Tamilnadu including the coastal areas, UP, Bihar and Nepal are on the path of this cloud surge. This formation is the result of both hot and cold factors. This formation happening in Pooradam (Purvashada) day known for rainfall seeding and rainfall occurring phenomena, can not be ignored.

We have to watch keenly the cloud formation in the coming days, for, the impact days are related to the 5th day of Garbottam when Mars and moon were in conjunction. The significantly noticeable hot air conditions on that day with bluish grey and fused formation of clouds all around the horizon on that day point to a stormy condition or thunder bolts or thunder showers (some wind circulation aspect will be there)

But the movement of clouds today makes me perplexed as to its direction. The movement is from SW to NE. It means the movement of clouds or rainfall on the impact day will be from NE to SW. That means the rainfall will be from the Bay of Bengal. I have no idea of clouds / cyclones or currents coming from the Bay in the month of August. But today’s and yesterday’s Garbottam is different. I am curiously waiting to see what the impact days are going to reveal.

Interesting read once again Maam. You are right it is going to be very difficult to expect the rains to come from the NE during the month of August. During the Southwest Monsoon period almost all rain bearing layers of winds will be Westerly. To be honest this is an interesting experiment which may not lead to immediate results but will possibly show us some understanding on how the old texts were written and what are we supposed to watch out for.

The direction of the clouds is confusing for prediction, but its presence on the Bay (for Chennai) may mean some Depression in the Bay. When I searched for Bay Depression in the month of August, I happened to see 4 such Depressions.


None of them crossed near Chennai or TN, but could have had some impact on coastal TN to a some extent.

What we are observing for 3 days now, starting from 5th, 6th and today, the 7th is overcast sky, dark clouds hiding the sun, mild breeze ( blowing from east and NE). Yesterday, (6th) the cloud cover was different from other days. On 5th and 7th (today) clouds in aquatic forms are seen.

The corresponding 5th day Garbottam was calm and cloudless but with hot winds and bluish grey clouds fused around the horizon. Plus Mars - Moon conjunction was there - in a airy sign (Libra). These features are likely to get less rains for Chennai but more rains elsewhere from storms.

The observation dates for the impact period happening now (5th, 6th and 7th Feb) are showing some rains. One feature derived from the 5th day Garbottam is that formation of a storm or a Depression may be there somewhere away from Chennai in the Bay or rains may just be accompanied with thunder bolts. Moon's conjunction with a malefic would also mean thunder. The impact period is AvaNi when there must be thunderbolts even it does not rain more. 24th August is "AvaNi Muzhakkam" day when rolling sounds of the thunder, if heard would indicate that the upcoming rainy season will be good.