I thought of writing down the observation of Garbottam days and check with corresponding days of future along with other astrological factors to arrive at a better understanding of prediction of rainfall.
The following was my observation done at a place in the suburb of Chennai. The impact is valid from 21st June to 5th July 2016.

(1) Wind:- Still air at the time of beginning of Garbottam at 5 PM on 29th Dec, 2015. Cool breeze was felt in the morning. Not very windy in general.
Result:- Not a strong factor for rainfall from 21st June to 5th July in this place of observation. However the cool breeze in the morning shows scattered rain or drizzles at night in that period.

(5) Clouds:- Cloudless at the beginning of Garbottam. Small groups of scattered clouds till midnight. No cloud formation during the day time too.
Result:- Does not indicate rains in the said period.

Interpretation:-
If all the 5 factors are present, heavy rainfall would occur in the said period. But only one feature was present in lesser magnitude. This works out to less than one third of the rainfall if we reduce the optimum rainfall by a quarter for the absence of each factor. We have to see whether this works out to 30% or less of the usual rainfall for this period.

(2) Atmospheric :- Of the 12 features noted in my blog on Garbottam, (1) gentle breeze was there in the morning. (2) Sun encircled with bright halo, but no halo around Moon.

(3) Planetary:- (1) Planets and stars appeared as clear, bright discs. Arudra (Betelgeuse) was blood red which was its original colour. (2) Sun was red at sun set. (3) Except Jupiter all the other planets were in Southern declinations.

Interpretation:-
Except red Sun and clear stars, other features were absent. Planets in southern declination are not good indicators for rainfall. Less than average rainfall for the said period in the place of observation is indicated.

Arudra Pravesham is the entry of the Sun in Arudra star in the next season (2016). This entry is an important indicator for general rainfall nature of the season. The day of the entry, the thithi, yoga and karana at that time, the lagna of the entry time, the kala (day or night) and the location of the moon at that time are noted to judge the nature of the rainfall season that comes after the entry. The details of how to see them are given in my blog on solar ingress.

The prediction based on Arudra Pravesham is important as it was noted in my blogs earlier. In one of my earlier blogs, I commented about the nature of Arudra Pravesham of Jaya varushm for the Monsoon season of 2014. It is reproduced below. 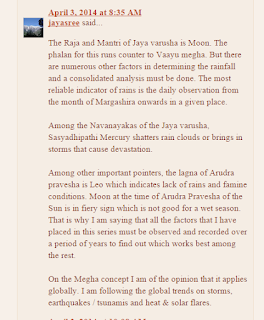 The Arudra Pravesha on 22nd June 2014, 10-35 AM happened in the fiery Leo lagna with Moon in fiery sign. The yoga was unfavourable Atiganda. The time of the day also was unfavourable as it was day time. Though other factors were favourable, the important ones namely lagna, moon sign and kaala were unfavourable and were associated with heat. Though the year Megha was Vaayu and Raja and Mantri (of the Nava nayaks of Solar ingress in Mesha) were favourable, the Arudra Pravesha lagna and other features being unfavourable, there was a kind of tug of war between the Mesha ingress features and Arudra ingress features. Based on other features, I went with indicators of Arudra ingress and expected lack of rains.

That year (2014) indeed experienced less rainfall. The IMD report confirmed this. The abstract of it is reproduced below. 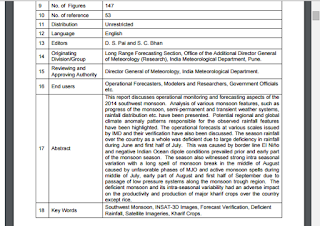 The report refers to ‘border line El Nino’ for this deficient rainfall. The El Nino has an explanation in astrology is what I wish to state.

The deficit of 2014 season can be explained by other astrological factors too, which I would do later. (In fact I am working on all the reports of IMD in its website, to arrive at a better understanding from astrological view point.)

For the upcoming season, the Arudra Pravesham is discussed below.

The upcoming year’s Arudra Pravesham is not all that good and not very bad. Sun enters Arudra on 21st June 2016 at 11 PM in the night.

Moon’s position, the star Purvashada and kaala (night time) are powerful enough to cause good rains, though the Meghadhipathi  (among Nava nayakas) is Mars and the day of entry is Mars. This ensures above normal rainfall for the whole season of 2016 upto December.

Though, the Arudra Pravesham period may not experience good rains in my place of observation, it would rain on the path of the SW monsoon by more than average.

In this context, the Megha is Neela Megha which gives mixed rainfall – with more rains in one place and deficient rains in another. Garbottam observation would indicate this trend in different places.
Another important feature we must note is the position of planets at the time of Arudra Pravesham and the rainy season in general. The study of IMD reports gives a number of clues on what to look for and how the rainfall yogas (Anavrishti and Ativrishti) play a role. I will write them one by one in future blogs.

For the current topic, on the day of Arudra Pravesha in 2016, Venus is conjunct with Sun and is combust. Venus is forward to Sun and Mercury is behind the Sun. Venus and Sun will be in Arudra while Moon will be opposite to them in Pooradam. This is ideal for good rainfall.

Generally Venus in combustion causes good rainfall. The combustion starts 10 degrees before Sun and ends at 10 degrees after Venus crosses the Sun. On April 29th 2016, Venus enters into combustion while Mercury is retrograde in the front of Sun. All the three, Sun, Venus and Mercury are in the same sign which is Aries. This gives thunderstorms or pre-monsoon rains. But as the planets progress, the combustion continues into Taurus when Sun- Venus come opposite to Saturn and Mars in Scorpio. Though these two malefics in a watery sign is good for rainfall, their opposition to monsoon causing Venus and Mercury at the time of start of Monsoon is not good. So I foresee a delayed onset of SW monsoon.

Anyway the combustion of Venus continues at the time Arudra Ingress of the Sun. At that time opposition from Saturn and Mars is over. So the Arudra Pravesham on 21st June must come with good progress of the SW monsoon.

The end of combustion of Venus is also a factor in determining the rainfall.

In this scheme, the sky is divided into 6 Mandalas of stars and the re-emergence of Venus in a Mandala determines the rainfall. (see at the end of the article)

On July 10th 2016, Venus re-emerges from combustion in the 2nd Mandala (Poosam). This gives less than average rainfall.

So the early pointers are for ups and downs in rainfall in the early part of SW monsoon season, though the extent of the rainfall is such that it is mixed, more at one place and less at another. In my place, the 1st day of Garbottam shows that it will be scanty atleast until 5th July.

Let me observe the 2nd day of Garbottam and look at other astrological features.