Rainfall prediction forms a voluminous part of Mundane astrology followed in India since time immemorial. In fact big names such as Rishis  Kashyapa, Parashara, Garga and  Vatsa  are associated with prediction of rainfall. Their views on long range prediction of climate and also weather patterns with specific reference to rainfall are given in 8 chapters in the 2000 year old book called Brihad Samhita written by Varahamihira. Any reader of those chapters would be surprised at the depth of the details such as the time, duration, place, extent, quantity and quality of rainfall that can possibly be detected as early as 6 months before the rains occur. These chapters deserve a deeper study and application so as to test them in the current times and if successful to incorporate them in rainfall prediction models.

The earliest prediction model for next year’s monsoon is known as “Garbottam” which means ‘Fetus formation’ or ‘nature of pregnancy’. This is also known as ‘pregnancy of clouds’. This is observed on the month of Margazhi, soon after the rainfall of the previous season is over. At the time the Sun enters the star Pooradam (Purvashada) in then sign of Sagittarius in Margazhi, it is said that the conditions for the next season’s rainfall start taking shape. This goes on for nearly 14 days when the Sun will be crossing the star Pooradam. This period is known as Garbottam period or pregnancy period. One can find the beginning and end of this period mentioned in the almanacs (Panchangam).

During this period 5 types of meteorological factors are observed day and night at 3 levels of surroundings.

The three-some observation is:-

The observation is applicable for the place of the observer. In olden days every village had astrologers doing that observation. Today meteorology applies to vast regions, but this ancient Indian method helps to tell on day to day basis whether a particular locality would get rains or not. For instance, though rain clouds may hover over Chennai, it need not give rain at all places in Chennai. It may have rained say, in Vadapalani  but not in Mylapore. Such differences within short distances can be predicted by this method. For this, the observer must be available in that particular place continuously at least from Margazhi to Panguni and on specific days at other months.

The basic rationale of this method of Garbottam is that the kind of meteorological features present in a particular place is related to rainfall or no rainfall that would occur in that place 195 days later! In other words, the meteorological conditions seen at any place at a particular time in space is related to rainfall or no-rain fall at the same place when earth has moved to 180 degrees away from that initial place. This can be shown by a diagram as follows: 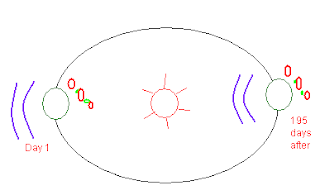 The Garbottam days have a slightly different calculation.
The rationale is that each day of the Garbottam in Pooradam in Sagittarius would have a bearing for the duration of sun's stay in every star starting from Arudra (Thrivadhirai) in the month of Aani / Gemini  in the next year. This goes upto Moola in next Margazhi.

The stars mentioned below indicate the 14 day transit of Sun in that star in the next year when rainy season will be on. Eg 1st day of Garbottam will have an effect on 13 to 14 days of sun's transit in Thiruvadhirai. The corresponding date of Garbottam as of now is given following the day and the corresponding rainfall starting date for the year 2016 is given in brackets.

{Note: In my previous article on general predictions for 2016 season, I noted that planetary combination for rainfall that occurred in November- December 2015 reappears in the same period in 2016 also. The dates of heavy rainfall are likely to be 18, 19 and 20 November 2016. This corresponds to the 11th and 12th day of Garbottam. A keen observation on these days would confirm this prospect. Rainfall astrology has layers of confirmation or rejection like this as a matter of fine-tuning the prediction.}

The interpretation is as follows:

If on the 1st day of Garbottam, there are dark clouds all over the sky and sun is hidden behind, it will rain here and there and every now and then in the 14 day period when Sun will be transiting Arudra (in Gemini) (starting from 21st June 2016).

Similarly if on the 2nd  day of Garbottam, there are dark clouds all over the sky and sun is hidden behind, it will rain here and there and every now and then in the 14 day period when Sun will be transiting Punarvasu star (in Gemini and Cancer) (starting from 15th July 2016).

Similarly on the 3rd  day of Garbottam, there are dark clouds all over the sky and sun is hidden behind, it will rain here and there and every now and then in the 14 day period when Sun will be transiting Poosam or Pushya star (in Cancer). (Staring from 19th July 2016)
Like this Sun's transit in subsequent stars are noted for periods of rainfall. If it rains when Sun enters a star, it will rain throughout the period of Sun’s transit in that star.

Now the features to be observed:-

Note:- Applicable on day to day basis during Garbottam period and also after that. The prediction is for the corresponding day later, on the 195th day..

If one any day in the months from Margazhi to Panguni all the above 5 factors are present, the quantity of the subsequent rainfall will be 1 Drona. (Drona is equal to 200 phalas. Quantification in today's terms is not known. Perhaps the rainfall on those days can be recorded and cross checked with other days when similar conditions prevailed.)
Reduce the quantity by quarter for the absence of every one factor.

1.      Clouds resembling pearl or silver color
2.      Clouds in the shape of aquatic animal, huge and dense.
3.      These clouds scorched by bright sun light
4.      Gentle breeze
5.      Sun and the Moon encircled by glossy, bright and thick halo.
6.      Sky filled with bulky clouds or smooth needle like clouds (cirrus), or in the shape of sword.
7.      Clouds appearing in red or blue tint.
8.      Pleasant twilights in morning and evening.
9.      Light rumbling thunder
10.  Rainbow in the lower horizon.
11.  Red glow in the horizon at dawn and sun set. This must be seen only in Margashira and Pushya months. (Solar months also)
12.  Clouds with halos
{Note:- Presence of 3 and 4 features together of the above category would result in torrential rain on the 195th day)

III) Planetary factors to be observed in the 4 month period.

{Note:- During the current Garbottam period, on the 8th and 9th of January (10, 11th and 12th day of Garbottam), Saturn and Venus are conjunct within one degree.  This is the case of planetary war which mars rainfall in the corresponding period in November. Earlier we noted 11th and 12th day of Garbottam as having good planetary combination for rainfall in on November 18, 19 and 20th of 2016. We must watch how this happens (on 18th November 2016) and which feature is more powerful.

Even after Garbottam is over by 11th January 2016, we must continue the observation as follows:
Month-wise observation for good rainfall after 195 days:


The above features ensure good 'conception of rainfall'.

In Chitthrai  and Vaikasi, sky marked by winds, clouds and halos ensure conception of rainfall which will fall 195th day afterwards.

Position of Moon during the above 4 month period.

When the above 3-some favourable features of conception are present in a day when Moon is crossing Purvashada (Pooradam), Uttarashada (Uttradam), Purva Bhadrapada (Purattadhi), Uttarabhadrapada (Uttrattadhi) and Rohini, the subsequent rainfall on the 195th day will be abundant.

When the above 3-some favourable features of conception are present in a day when Moon is crossing Arudra, Aslesha (Ayilyam) , Magha , Swati and Satabhishak (sadayam), the subsequent rains will go on for many days. On the contrary, if the 3-some factors are marred, there will be dryness.

If Moon crosses all the above mentioned stars with 3-some factors being present and marring factors being absent in Margazhi - would give rainfall for 8 days later (after 195 days).
In Thai - for 6 days
In Maasi -16 days
In Panguni – 24 days
In Chittrai– 20 days
In Vaiskasi – 3 days.

From the above details, we can deduce that this year’s (2015) continuous rains in October and November is related pregnancy features of Panguni and Chitthirai which have  a bearing for 24 days and 20 days respectively. The heaviest rainfall of the century occurred then.

This data also shows that October and November (Aippasi and Karthigai) are likely to have long spell of rainfall in any year provided the pregnancy features were good in Chitthirai and Vaikasi when Moon transited specific stars.

This observation is easy to make but must be done with care. Ancient sages and their disciples have done this observation year after year for several years, even for millennia. Since there are marring features too, we need to do the observation for a few years by checking the marring features also and assess the actual rainfall. Like any branch of science, this vigyana of rainfall offers testable and verifiable body of knowledge. Let us make use of it to complement meteorological predictions.

The 5 meteorological factors +3-some observation also holds good for any day from Margazhi to Vaikashi and has to be correlated to 195 day period for rainfall prediction.

In this we see the days as follows:

Suppose the pregnancy features are seen on prathamai (thithi) in waxing period of say, Thai month, then the corresponding day is Prathamai of waning period of Aadi. (6 months later). This is how it is told in Brihad Samhita. But it will be difficult for common man. That is why I have written the 195 day count (which is also mentioned in Brihad samhita). The days of lunar months are counted to arrive at this number. 6 lunar months = 180 days. Plus half month / one phase makes it 180 +15 = 195 days. The actual occurrence of rain will be in   terms of thithis - pradamai, Dwithiyai, thrithiyai and so on.

Is Garbottam applicable across the globe?

It must be checked. Garbottam  was seen in Tamilnadu until 3 generations ago. I have heard old timers say that. As Garbottam is associated with rishis this must have been observed throughout India.

Going by the logic of Garbottam, I think it must be applicable throughout Northern hemisphere by adding or deleting some meteorological features available in the respective regions. Based on the logic of Garbottam, people in other regions can develop the factors as applicable to their region. Anywhere in the globe,  the 195 day period must hold good.

Tornadoes are another phenomenon that also comes under astrological scrutiny. Movement of Mars is a prominent feature in that. I am yet to study the tornado records.

Posted by Jayasree Saranathan Ph.D at 2:48 AM