(1) Wind:- Occasional cool breeze
(2) Rain:- Nil.
(3) Lightening:- Nil.
(4) Thunder:- Nil.
(5) Clouds:-  Whitish clouds spread in the eastern direction by 10-00 AM. After that bunches of clouds started crossing the disc of the Sun often. At 10-30 AM the sun was hidden by clouds for a few minutes which coincided with cool breeze.

Clouds were crossing the Sun around 11-00 AM, 11-30 AM and 12-30 PM. After that the duration of hiding were very less and in fleeting seconds. However the clouds were seen in huge bunches moving in North and East till 2 PM. 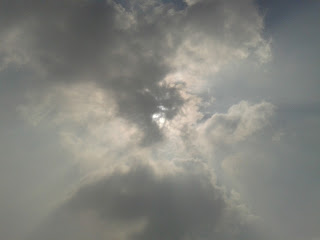 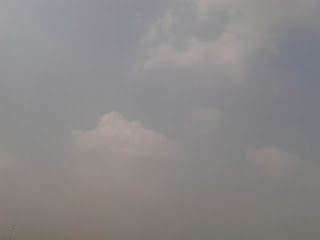 (3) Planetary:- (1) Stars and planets appeared dim.  (2) All planets were in Southern declination.

(1) Mercury – Venus closeness is on during this fortnight.  Till 8th October the gap would be reducing between them.  From 8th to 10th October, the gap is stationary at a distance of 23 degrees. From 11th October onwards this gap starts increasing. The fortnight however enjoys the closeness between the 2 planets.

(2) The first week of October has some important planetary features.
They are
(a) On 5th October Venus crosses Mars which is capable of triggering rainfall or a favourable meteorological condition in the Bay.

(b) On 8th October Mercury crosses the Sun. This could trigger a meteorological system. The continuing combustion of Mercury could favour rainfall.

(c) On 9th October Venus enters Virgo which could trigger a fresh rainfall.

(1) The presence of Mars in Leo is a rainfall discouraging feature. This continues till 13th October.
(2) On 2nd October Mercury enters Hastha star in sapta Nadi chakra. This is likely to cause more windiness than rainfall.

(3) On 7th October, Venus enters Uttra Phalguni star in Sapta Nadi Chakra. This is likely to cause cloudiness with less rainfall.


Inference:-  Cloud formation and hiding the sun was less compared to yesterday, but the presence of clouds is more today. Garbottam was seen in the 2nd quarter of this day 8. This corresponds to the period of junction between September and October, perhaps between 29th September and 2nd October. It remains to be seen how the spoiling features work during this period.