(1) Wind:- Cool and pleasant breeze whenever the sun was hidden.

(5) Clouds:-  From 10-30 AM onwards, clouds started growing in the east and crossing the Sun. But until 12 Noon the frequency and the duration of crossing the Sun was very less. But post noon till 3 PM, the sky looked almost overcast and the clouds seemed to follow the Sun and kept hiding the Sun for long duration. The clouds were mostly dull white in colour and while crossing the Sun looked dark.

For the first time the clouds were hiding the Sun for a few minutes around 10-40 AM.
From 12 PM onwards, huge bunches of clouds kept surging one after the other and crossed the Sun.

(3) Not many aquatic shaped clouds were seen. The clouds looked like a blanket spread over large area. Those with some shape had huge bulge like the tortoise or the back of a duck. 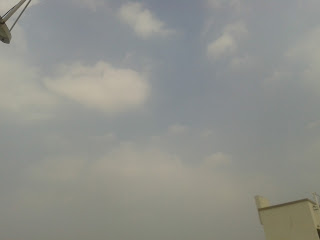 (3) Planetary:- (1) Stars and planets appeared dim.  (2) All planets were in Southern declination. (3) Evening Sun and twilight sky was red in colour.

There is no specific rainfall support yoga during this fortnight. This is a worrisome feature as the Garbottam of the day was good.
On 31st October Mercury comes out of combustion. Usually when this happens there will be rains at that time.
On November 2nd – 3rd Venus enters Libra to join Jupiter. Conjunction of Venus and Jupiter is a good sign of rainfall.

Since the above transits come close in heel, this could trigger rainfall as the good Garbottam of today could give rains from 30 – 31st October onwards for a week.

(2) This fortnight coincides with Sun’s transit in Swati. This is Vayu nadi in Sapta Nadi Chakra. This transit could give more windiness than rains or the rains would be accompanied with winds or the rain clouds would be shattered by winds. Mercury in forward position of Venus and Sun also adds to this probability.

(3) Saturn is the lead of all the other planets during this fortnight. This is a rainfall spoiler.


Inference:-  For the 2nd  time in the present Garbottam period, good cloud formation and movement of clouds across the sun to the accompaniment of cool breeze was felt for a longer duration.  Compared to yester day’s Garbottam, the duration was more and strong though cloud shapes were not helpful. After initial slackening, the Garbottam picked up after 12 noon and lasted for 3 hours. This must give rainfall in the middle of the fortnight.

With the ending of combustion of Mercury on 31st October 2017, rainfall must pick up as per this Garbottam. Though Mercury- Venus closeness is not there, Venus – Jupiter closeness starts from 2nd – 3rd November. This is going to last till 26th November 2017. Good Garbottam of today and this conjunction on the impact time must give rainfall to Chennai in the 1st week of November.

The ending date of combustion of Mercury (31st Oct) and entry date of Venus into Libra (2nd – 3rd Nov) must trigger some meteorological event in the Bay.

However this must be further reinforced by daily Garbottam. The corresponding Daily Garbottam dates for this period start on 22nd May 2017. On 22nd May and thereafter Sun joins the malefic Mars. This feature on the Garbottam date must result in cyclone formation on the impact day.

By this it is said that starting from 31st October, there exists trigger factors in the form of Mercury coming out of combustion and Venus entering Libra to join Jupiter; there also exists supportive Margazhi Garbottam (of today); there also exists conjunction of Sun with a malefic on the 195th day prior to that (daily Garbottam). If it rains on the impact day, then it is a learning / and proof  that spoiling planetary combinations can be over-run by a combination of features such as the ones mentioned above.

As per 195th day –impact theory (Daily Garbottam), today’s Garbottam must give rainfall on 18th July 2017 which is already indicated on the 2nd day of Margazhi Garbottam 2016-17.