Update on 11th May added at the end of the article.

The month of May starts with 2 opposing combinations of planets that had already started giving mixed results of extreme heat and wetness with instances of hail storms and thunder storms happening since 20th April 2017.

These are (1) Mercury – Venus closeness and (2) Sun- Mars closeness.

Mercury – Venus closeness started from 20th April and continues in May also.  But this date also marks the time of beginning of closeness between Sun and Mars.

Whenever Mars is ahead of all planets it causes hot and dry conditions.

However this opposition comes with a rainfall feature too. Opposition means one planet will be rising while another will be setting almost simultaneously.  When that happens that supports rainfall. Thus a mixed trend exists within Venus- Jupiter opposition. All these major combinations present in the month of May can be shown as follows: 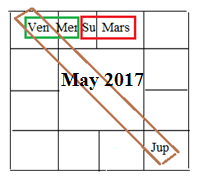 Sun- Mars conjunction is happening ahead of rainfall causing Venus- Mercury conjunction. This means both conditions prevail simultaneously which could result in hot day time followed with thunder showers. Venus- Jupiter opposition gives a no win- no loss situation which can be interpreted to mean that though there may be rains, the ultimate realisation in terms of water availability and rejuvenating water sources would be nil or not sufficient.

Rainfall support yogas in May 2017.

From April 20, Mercury has been moving backwards towards Venus which helps in reducing the gap between them. However on May 3, Mercury stops retrogression. It starts forward motion after that. From then onwards, Venus and Mercury would be moving forward one behind the other and this does not help in getting them any closer.

Their closeness happening in signs that denote west (Venus in Pisces) and east (Mercury in Aries) shows isolated rainfall in eastern and western parts of India. In the past when these two directions were involved it resulted in rainfall in interior Peninsular India with more areas in the western section of Peninsular India, as Venus, the rain-giver is in the sign of west.

The distance between them in the month of May is tabulated below to show how far the reduction in gap can help.

The closest distance between them is 19 degrees happening for 9 days.

Though this distance is insufficient to ensure widespread and heavy rainfall, it can support rainfall to some extent. The stars transited by Mercury and Venus at this time shows that North and NE India would get isolated thunder storms.

When Sun moves through the star Rohini, it is said to be in Vayu nadi. Though it is not categorised as rainfall yoga, it can give rainfall accompanied with gales and winds. This period is in between May 25 and June 8, 2017. Sun in Rohini indicates central parts of India and interior Peninsular India.

Usually when Venus enters the next sign in the rainy season, it triggers rainfall. With this entry into Aries, Venus and Mercury come to occupy Aries with no planet in between them. The closeness between them continues.

Rainfall spoiling yogas in May 2017.

(1) Mars ahead of all the planets.

(2) Sun- Mars conjunction happening ahead of all the planets.

(3) Mars in Dahana Nadi while it is moving in the star Mrigasheersha between May 16 and June 5.

(4) Mars enters Gemini on May 27, thereby coming to the opposite of Saturn. When Mars and Saturn are in opposite signs, it does spoil or retard rainfall.

One can notice that the combined reading of rainfall causing and spoiling yogas do not show a trigger feature for onset of SW monsoon.

Venus- Mercury closeness at 19 degrees is not enough, as they used to be in exact conjunction in the past that had triggered a meteorological event such as onset or formation of a system. The only redeeming feature is the entry of Venus in Aries by which it comes to be in the same sign with Mercury. This date (May 31) might perhaps indicate a weak onset of SWM.

The above planetary combinations do not indicate rainfall in eastern coastal regions of south India.
The daily Garbottam charts were not maintained for this month. However we can derive some inputs from the rainfall data of Nov- Dec 2016.

May 2017 corresponds to waning Aippasi and waxing Karthigai of last year. This corresponds to the period between mid- November to mid- December 2016.

November 2016 was totally dry and cloudless in Chennai. But there was Vardah cyclone crossing Chennai on Dec 11, 2016. It occurred in waxing phase of Karthigai. Assuming a few days prior to that had cloudy conditions, it corresponds to dates around May 20. In the absence of daily Garbottam chart, this cannot be confirmed.

The rainfall yoga caused by closeness between Mercury and Venus is having an upper hand over the deficient yoga caused by Mars moving in the forefront.

Ever since Mercury- Venus closeness began on 20th April, it had been raining in those parts indicated in the chart above.

Particularly from 9th May onwards, the rainfall has been fairly widespread in interior South India. On 9th these two planets came closest to each other and this distance continues to be the same till 17th May. Therefore  we can expect the current trend of widespread rainfall until then.

Even after that, the closeness continues until 21st June thereby indicating continuing scope for rainfall. The closeness season indicating rainfall for 2017, written in my blog 27th December 2016 is shown below.

The huge gap between June 21 and August 27 is a cause for concern and will be written in detail in the upcomimg monthly articles.

For the time being, the following factors (already written in the above article) are of importance.

15th May - Sun enters next sign (Taurus) to join with Mars - Spurt in heat conditions.
However the same combination leaves back Mercury and Venus to be close and together. This helps in rainfall activity.

25th May - Sun enters Rohini - Spurt in rainfall accompanied with thunder and winds.
31st May - Venus enters Aries to join with Mercury - They are going to be together in the same sign till 19th June without any adverse aspect from any planet - Rainfall activity.

These two dates - 25th May and 31st May - might be associated with onset of SWM.

Parts of Chennai received drizzles on the night of 9th May and in the morning of 11th (today).

These two are good Garbottam features and relate to the day before and after Deepavali this year. (Chathurdashi before Amavasya and Prathamai after Amavasya in Aippasi)

The dates are 18th and 20th October 2017. This means that many parts of Chennai would receive rainfall on the days before and after Deepavali this year.

Looking backwards before 6 and a half months, to see the link to drizzles today and on 9th May, we get interesting connections.

The corresponding dates are 29th and 31st October 2016.
On 29th October 2016, cyclone Kyant was expected to have hit Chennai. But it went away from Chennai. Perhaps the presence of rain clouds off Chennai brought drizzles and mild rains to Chennai today and on 9th.

Last week of May coincides with the period of Vardah that hit Chennai last year. 22nd and 23rd May are the exact corresponding dates of vardah on 10th and 11th Dec 2016. These 2 days in May are ruled out for rains now. Those regions in Tamilnadu that were under cloud cover during Vardah would get rains now.

As written in the article, 25th May marks the entry of Sun into Rohini which triggers thunderstorms / rains accompanied with gales. You can see the locations mentioned in the table. Rohini stands for central regions close to the western border in peninsular India.Maharastra, Konkan coasts come under this radar.

Till June 21st Venus- Mercury closeness is potent enough to give rains.