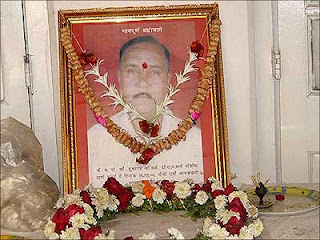 Other than the three top cops of Mumbai police, Hemant Karkare, Ashok Kamte and Vijay Salaskar who were killed in the recent attack on Mumbai by terrorists, people have forgotten a real hero. Tukaram Omble, 48, Assistant Sub-Inspector (ASI), the only cop who with his daredevil courage helped in the nabbing of a terrorist on 26/11 alive.

Omble was asked by his senior officer to take up a position on Marine drive on Wednesday night, as soon as the news of firings at Leopold Café, Oberoi and Taj Hotels came in.

Subsequently, at 12.45 am, Omble got an alert on his walkie-talkie that two terrorists had hijacked a Skoda car and were heading towards Girgaum Chowpatty. Minutes later Omble saw the Skoda drtiving past him. He jumped onto his two- wheeler and chased the terrorist's car.

A team from the DB Marg police station was busy setting up a naka bandi at the Chowpatty signal. As soon as the car approached the signal the terrorists fired at the police team but had to reduce the speed of the car, thanks to the barricades laid by the police team for naka bandi.

Omble overtook the Skoda and stopped in front of it, forcing the driver of the car to change the direction towards right and hit the divider.

With one terrorist busy controlling the car, Omble sprang on other terrorist, Amir Kasab and caught hold of the barrel of the AK-47 rifle with both hands. In retaliation Kasab pulled the trigger of the gun, whose barrel was pointed towards Omble.

A spray of bullets entered Omble's stomach and intestines. But the latter held on to the gun until his last breath, stopping Kasab from shooting anyone else.

In next to no time other cops arrived and killed another terrorist, Ismail, pounced on Kasab and captured him.Investigating agencies were successful in gathering lot of information from the sole terrorist who has been arrested. But this was only possible because of Omble's daredevil move.

Omble is survived by his wife and four daughters. He is a real hero, who has been forgotten by people as well as the politicians who are busy in resigning and giving up their responsibilities rather than to fight against such terrorism.

The name and bravery of Sri Tukaram Omble, who sacrificed his life in nabbing Kasab,

the prized catch in the Mumbai attacks,

has now been recorded in the History of India for ever

to be remembered, recalled and to remain as an inspiration for generations to come.

The Nation’s highest Honour, the Ashok Chakra has been conferred on him yesterday.

The Nation salutes this Hero with pride and tears too.

He has left behind his wife and three daughters.

It is the duty of us and this Nation to take care of them.

While closing this note with a prayer for their well-being,

of the conferment of the Ashok Chakra (given to his wife) yesterday…..

Hope his memory is not lost as a one-day wonder!!

i am glad there are people like you who appreciate what Omble did.

IN case you are interested, an activist Sumaira Abdulali is writing to the PM to give Omble the highest civilian ward for his courage, daredevilry and sacrifice. If you wish to join the effort, please print out the letter pasted below and get as many signatures (with phone numbers) as possible and scan and send them to saluting.omble@gmail.com. that would be a good cause to serve.

Shri Manmohan Singh,
Prime Minister,
Delhi
Hon’ble Prime Minister Shri Manmohan Singh,
I request that the exemplary bravery shown by Police sub Inspector Shri Tukaram Ombale, in leading a charge of practically unarmed cops against heavily armed terrorists and in almost single handedly making possible the arrest of a terrorist at Chowpatty by shielding AK 47 gunfire with his own body should be given at least equal honours with Senior officers such as Shri Hemant Karkare, and others.
I value the contribution of all those who were martyred in the terrorist attacks and none more so than that of the three senior officers of the Mumbai Police. However, martyrdom in an ambush by terrorists needs to be distinguished from martyrdom through the positive and successful action of Sub Inspector Ombale.
Shri Ombale’s bravery does not rank second to any and is not associated with the formal rank of the person. Thanks to this remarkable person, the country has secured the capture of a terrorist, an accomplishment in which even trained NSG commandoes failed. Information from the terrorist has been invaluable in determining details of the attacks including involvement of established terrorist outfits in neighbouring countries which would otherwise never have been confirmed. It would be appropriate to confer the highest honours on sub Inspector Ombale, regardless of rank, including the highest level of compensation to his family.


Hon’ble Home Minister Shri P. Chidambaram has acknowledged the country’s indebtedness to Shri Ombale during his statement opening the debate on the Mumbai terrorist attacks. “I ask you to remember the extraordinary courage of assistant sub inspector Tukaram Ombale who grabbed the barrel of the gun and took all the bullets in his chest to enable his fellow policemen to overpower Mohamed Ajmal Amir,” he said. I sincerely request that you follow up on this and ensure highest civilian honours for bravery equivalent to the Param Vir Chakra are accorded to Police sub Inspector Shi Ombale and compensation to his family in accordance with his contribution to the security and welfare of our country.
Thank you and with regards
Yours sincerely,

I completely agree that Tukaram Ombale should be given the highest possible honour for what he did on the night of 26th November. I would like to help his family in any way I can. Can someone guide me on this?

there was a sant tukaram, and now there is veer tukaram.!.. my eyes are filled with tears as i post this...jis desh ke maati pe aisa shoorveer janam leta ho, woh desh dhanya hai!....the other police officers may have been superior to shri tukaram omble in rank, but tukaram omble is second to none in courage!

Sri Tukaram Omble get the whole credit of nabbing Kasab.

It is Nov 2009 as I post this. I am a month away from visiting Mumbai from the USA. At the time of the terror attacks, I was sore about Mr. Ombale's sacrifice and bravery not receiving the media coverage he deserved. So I sent a mass email out within my indian network and received no response to it. So the conclusion is that unless an issue affects you immediately, indians will not rise to the ocassion.
I was hoping to go the Times of India office to speak with the editor for TOI to take initiative in raising funds for Ombale's daughters and wife. It is the least the country can do to repay him. Any merit in doing that you think?

Seema: Did the activist Sumaira Abdulali have any success with her letter to the PM?

Please keep me informed as I am frustrated that an ambush and a sacrifice are weighed on the same scale.

No doubt Tukaram Omble deserves a hats off,he was a brave patriot.At the same time its not good to under-rate their sacrifice by comparing them.Today we want to salute the bravery of our own maratha manush Tukaram Omble who saved us a slap on our face by catching the bastard Kasab,& by giving his life for our safety.May the souls of all the Martyrs of 26/11 rest in peace.
May god bless our country.Jai Hind,Jai Bharat

Today (May 3rd 2010) Ajmal is to be given verdict.
He does not deserve death penalty but should be allowed to be eaten alive by pigs.
Jai Bharat.
Jay Shree Ram
Kasab Murgabad