During the height of freedom struggle,

Sri Aurobindo was arrested and put into jail where he had soul-searching experience.

Later he shared his thoughts in a meeting at Uttarpara in Bengal, on 30 May 1909.

This speech is very much suitable for today's India

which is turning anarchist with internal bickering,

thanks to the divide and rule policy of present crop of politicians.

Sri Aurobindo's solution to Unity and development of our country

is to adopt Sanatana dharma as the Dharma of India! 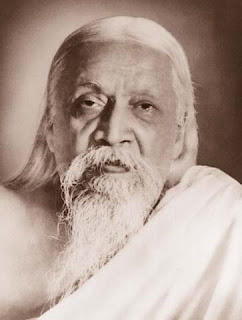 To quote his words,

"We speak often of the Hindu religion, of the Sanatana

Dharma, but few of us really know what that religion is. Other

religions are preponderatingly religions of faith and profession,

but the Sanatana Dharma is life itself; it is a thing that has not

so much to be believed as lived. This is the dharma that for

the salvation of humanity was cherished in the seclusion of this

peninsula from of old. It is to give this religion that India is

rising. She does not rise as other countries do, for self or when

she is strong, to trample on the weak. She is rising to shed the

eternal light entrusted to her over the world. India has always

and not for herself that she must be great…….

He (the Inner voice / Inner God) said to me, "This is the

young generation, the new and mighty nation that is arising at

my command. They are greater than yourself. What have you to

fear? If you stood aside or slept, the work would still be done.

If you were cast aside tomorrow, here are the young men who

ever done. You have only got some strength from me to speak

a word to this nation which will help to raise it." This was the

next thing He told me.

Then a thing happened suddenly and in a moment I was

hurried away to the seclusion of a solitary cell. What happened

to me during that period I am not impelled to say, but only this

that day after day, He showed me His wonders and made me

realise the utter truth of the Hindu religion. I had had many

doubts before. I was brought up in England amongst foreign

ideas and an atmosphere entirely foreign. About many things

imagination; that there was much of dream in it, much that

was delusion and maya. But now day after day I realised in the

of the Hindu religion. They became living experiences to me,

and things were opened to me which no material science could

explain. When I first approached Him, it was not entirely in

Swadeshi began and I was drawn into the public field.

When I approached God at that time, I hardly had a living

God at all. I did not feel His presence. Yet something drew me

Hindu religion. I felt there must be a mighty truth somewhere in

this Yoga, a mighty truth in this religion based on the Vedanta.

find out if my idea was right, I did it in this spirit and with this

prayer to Him, "If Thou art, then Thou knowest my heart. Thou

which others ask for.

I ask only for strength to uplift this nation,

love and to whom I pray that I may devote my life." I strove long

for the realisation of Yoga and at last to some extent I had it, but

in what I most desired, I was not satisfied. Then in the seclusion

of the jail, of the solitary cell I asked for it again. I said, "Give

me Thy adesh. I do not know what work to do or how to do it.

Give me a message."

In the communion of Yoga two messages

came. The first message said, "I have given you a work and it

is to help to uplift this nation. Before long the time will come

when you will have to go out of jail; for it is not my will that this

time as others have to do, in suffering for their country. I have

called you to work, and that is the adesh for which you have

asked. I give you the adesh to go forth and do my work."

The second message came and it said,

"Something has been shown to you in this year of seclusion,

something about which you had

your doubts and it is the truth of the Hindu religion. It is this

religion that I am raising up before the world, it is this that

I have perfected and developed through the rishis, saints and

avatars, and now it is going forth to do my work among the

nations. I am raising up this nation to send forth my word. This

is the Sanatana Dharma, this is the eternal religion which you

did not really know before, but which I have now revealed to

you. The agnostic and the sceptic in you have been answered,

for I have given you proofs within and without you, physical

and subjective, which have satisfied you. When you go forth,

Dharma that they arise, it is for the world and not for themselves

that they arise. I am giving them freedom for the service of the

When therefore it is said that India shall rise, it is the

Sanatana Dharma that shall rise.

When it is said that India shall be great,

it is the Sanatana Dharma that shall be great.

When it is said that India shall expand and extend herself,

it is the Sanatana Dharma that shall expand and extend

itself over the world.

I have shown you that I am everywhere

who oppose them and stand in their path.

I am working in everybody

and whatever men may think or do they can do nothing

but help on my purpose.

They also are doing my work; they are not my

enemies but my instruments.

In all your actions you are moving

forward without knowing which way you move.

You mean to do one thing and you do another.

You aim at a result and your efforts subserve one

that is different or contrary.

It is Shakti that has gone forth and entered into the people.

Since long ago I have been preparing this uprising and

now the time has come and it is I who will lead it to its fulfilment."

This then is what I have to say to you.

The name of your society is "Society for the Protection of Religion".

Well, the protection of the religion,

the protection and upraising before the world of the Hindu religion,

that is the work before us.

But what is the Hindu religion?

What is this religion which we call Sanatana, eternal?

It is the Hindu religion only because the

Hindu nation has kept it, because in this peninsula it grew up

in the seclusion of the sea and the Himalayas,

because in this sacred and ancient land it was given

as a charge to the Aryan race to preserve through the ages.

But it is not circumscribed by the confines of a single country,

it does not belong peculiarly

and for ever to a bounded part of the world.

That which we call

the Hindu religion is really the eternal religion,

because it is the universal religion which embraces all others.

If a religion is not universal, it cannot be eternal.

can live only for a limited time

and a limited purpose.

This is the one religion that can triumph

over materialism by including and anticipating the discoveries of

science and the speculations of philosophy.

It is the one religion

which impresses on mankind the closeness of God to us

and embraces in its compass all the possible means

by which man can approach God.

It is the one religion which insists every

moment on the truth which all religions acknowledge,

that He is in all men and all things and

that in Him we move and have our being.

It is the one religion which enables us not only to

understand and believe this truth

but to realise it with every part of our being.

It is the one religion which shows the world

what the world is, that it is the lila of Vasudeva.

in that lila, its subtlest laws and its noblest rules.

It is the one religion which does not separate life

in any smallest detail from religion,

which knows what immortality is and

has utterly removed from us the reality of death.

What I intended to speak has been put away from

me, and beyond what is given to me I have nothing to say.

It is only the word that is put into me that I can speak to you.

That word is now finished.

I spoke once before with this force in me

and that nationalism is not politics but a religion, a creed, a faith.

I say it again today, but I put it in another way.

I say no longer that nationalism is a creed, a religion, a faith;

I say that it is

the Sanatana Dharma which for us is nationalism.

This Hindu nation was born with the Sanatana Dharma,

with it it moves

and with it it grows.

When the Sanatana Dharma declines,

Then the nation declines,

and if the Sanatana Dharma were capable of perishing,

with the Sanatana Dharma it would perish.

The Sanatana Dharma, that is nationalism.

This is the message that I have to speak to you."

(Excerpted from the text published in the Bengalee, an

BJP’s Prime Ministerial candidate L K Advani has promised to set up a “consultative mechanism” involving religious leaders if voted to power to discuss “issues facing the nation.” “It will be our endeavour to seek on a regular basis the guidance of spiritual leaders of all denominations on major challenges and issues facing the nation. For this, we shall evolve a suitable consultative mechanism,” Advani said in a letter to religious leaders on Saturday.

The letter said to be send to more than 1000 spiritual leaders across the country, says it had been the lifelong ambition of Advani that “politics, governance and other national affairs should be guided by lofty ideals as enshrined in the concept of Ram Rajya (ideal state), popularised by Mahatma Gandhi.” “At the present crucial juncture in our nation’s life, when people are looking for a decisive change, I seek your blessings, guidance and support with ‘Sashtang Namaskar’ (utmost reverance),” says the letter.

When contacted, Advani’s office said the copies of the letter have been send to Baba Ramdev, Shri Shri Ravi Shanker, Maulana Waihuddin and several archbishops of different churches.