In these times of Knowledge explosion happening with the Vedic fervor – “let noble thoughts come to us from all sides”, a thoughtlessly initiated act by the Government of Tamilnadu is brewing discontent for some time now. The recently tabled Bill on Agriculture is narrow in perception and draconian in essence. The Bill prohibits anyone not having a degree in agriculture from the Universities in the State or from a university in another state with which Tamilnadu has a reciprocatory understanding, from rendering services to the farmers in need of such services.

This bill, at one stroke rejects the wisdom of persons from diverse fields – including astrology – and prohibits them from rendering their services to the farmers of Tamilnadu. The issue is gaining attention only after the high-profile names such as Dr Vandana Shiva, came to be reported by the media. The media is more worried about why SRK was stopped in the airport rather than about why the experts are stopped by the TN government from engaging themselves in agricultural issues of the state.

Traditional wisdom of astrology is one area – or rather the main area that controlled agriculture for millennia with success.

The anavrishti (rainlessness) and athivrishti yogas (more rains) of rain were common knowledge to our ancients.

They were keen observers of the skies and climate and formulated many ingenious ways that helped them to see through the dry seasons too.

Any farmer used to have the basic knowledge about the celestial indicators for every kind of agricultural operation.
A previous post on this is here:- Rahu - a guide to agriculturists

One instance that comes to my mind is the pathetic status of the Meteorological department of in predicting rains.

In the current season, 9 out of 10 predictions of the Department failed. This was followed by a war of words between one Mr S.Ramachandran, a weather researcher in Chennai and the Department officials. Mr Ramachandran followed the traditional methods of rain-forecast based on astrology and showed how they are more reliable.

The Officials of the IMD did concede that there are errors in their so-called scientific methods and that they are more guided by their university education on meteorology. It is high time that they take up traditional forecasting methods, do research on them and explore the possibility of incorporating them in their University texts and in forecasts. Such a thing is happening in civil engineering where Vastu principles are included. It is time the vast traditional wisdom of agriculture too is incorporated in University education. Continuing research and development on this can not happen if this knowledge is discouraged. The current bill seeks to disregard this traditional knowledge.

The well known ecologist, Dr Vandana Shiva has raised her opposition to this act thereby getting better attention to this issue. It is hoped that better sense prevails and the government withdraws this act or makes suitable amends.

A blog on this issue:-

Related post from this blog on how traditional agriculture was superb in olden days:-

The objectionable clauses of the Act are given below.

The text of the act can be read here:-

29. No person other than a person whose name is borne on the register shall

be signed or authenticated by a duly qualified agricultural practitioner;

in assessing soil and water qualities, quantity of organic manorial substances and fertilizers,

identifying pests and diseases of crops and prescribing remedial measures, formulating and

in development of perennial plantations. 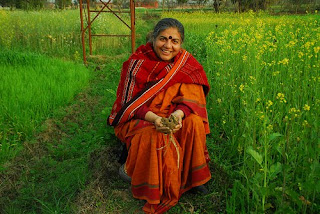 Well-known ecologist, Dr Vandana Shiva, on Monday came out in support of the farmers' objections and said the rejection of traditional knowledge of farmers would mean more farmer suicides - and crop failures. She also said she would launch an agitation in the state urging the government to strike down the proposed law.

The bill was introduced in the Assembly on June 23 and passed the next day without a debate. Agriculture minister Veerapandi S.
Arumugam called the bill an attempt to regulate the agriculture industry as it proposes an agricultural practitioners' register in which only graduates in agricultural science can enrol themselves. The bill proposes punishment of up to six months rigorous imprisonment for those practising agriculture without registering themselves.

Dr Shiva was against the dismissal of the traditional knowledge system of the farmers. Speaking to the media, she urged the government to strike down the proposed law. "UN's international assessment of agricultural knowledge, science and technology for development says the knowledge of scientists and farmers have to be used in tandem to sustain agriculture," she said.

"The Government of Tamil Nadu has to repeal the proposed black law. It is against diversity and pluralism of knowledge," she added.

ERODE: Farmers have raised objections to the State Government’s bill on agriculture, tabled in the Assembly recently.

Raising the issue at the monthly farmers’ grievance meeting, held here at the Collectorate on Friday, R. Selvam said the new bill ‘A bill to regulate Agricultural Practice and to provide for the establishment of Agricultural Council and the maintenance of register of persons having qualification in agriculture or horticulture and for matters connected therewith’ was ‘anti-farmer.’

Referring to the sections of the bill, he said if implemented, it would allow only persons with agriculture qualification to practice as agricultural practitioners and punish others like farmers, who had traditional knowledge. He termed it a ‘surrender to multi-national companies’.

Addressing a press conference on Friday, the members stated that the bill brought the State’s agricultural practices, which are more than 5,000 years old, to a halt with its conditions.

The bill, among other things, disempowers those without agriculture degrees from counseling farmers on their agriculture-related decisions. The bill, stated Miguel Braganza, Organic Farming Association, took the entire organic farming industry by surprise, owing to the nature of the conditions it laid. “Especially the clause which said farmers had to seek guidance only from those with degrees in agriculture and nobody else,” he said.

Dr Nammalwar, Organic Farming Scientist, VANAGAM, said the Bill disregarded the acquired wisdom of all agriculturists, who did not have a degree in the subject. “The Bill doesn’t stop with making it mandatory for farmers to seek the advice of those with Degrees in Agriculture in prescribed Universities. It even calls for a punishment for non-degree holders who counsel farmers, with Rs 5,000 as fine for the first time, and Rs 10,000 as fine or 6 months imprisonment or both, for the second time,” he said. With this bill coming into force, organic farming, which forms less than 2 percent of the curriculum in Agriculture courses, will suffer greatly, he observed.

In a bid to mark their protest, a padayathra spanning over 500 km has been planned on October 2, starting from Dindugal.

News reports on failure of Meteorological predictions and the need to try traditional methods in rainfall prediction:-

Nine out of 10 monsoon predictions forecast by the Indian Meteorological Department (IMD) are untrue. There is a scientific reason for it. "Their methods are unscientific,"
says Mr S.Ramachandran, a well-known weather researcher in the city.

The 135-year-old weather office, the first in the world to give out monsoon predictions, is not unperturbed by its flaws. The glaring failure to foresee the droughts of 2002 and 2004 for example, prompted the IMD to change its models for forecasting rainfall. However, even in 2007, the year in which the parameters that are currently used were implemented, there were discrepancies in prediction -- while the IMD pegged the rainfall to be 95 per cent, the actual figure stood at 105 per cent.

Rather than focusing on present influences, the official weatherman bends over past records of rainfall and harps on questionable global influences like the El Nino, making the forecasts not only incomplete but also vague and irregular, Mr Ramachandran asserts.

Interestingly, contrary to the standard response of Met officials that forecasts cannot be given beyond 48 hours, it is possible to predict rainfall for the next century, Mr Ramachandran says. "The IMD completely ignores the crucial role played by planets in determining monsoon and natural calamities, even though predictions made by tracking their influences on earth have come true. Such knowledge already exists in our ancient scriptures."

Apart from the drought of 2002 in the country, Mr Ramachandran had also accurately predicted the Hurricane Katrina (2005), the earthquake in China (2008), and Cyclone Nisha that lashed the city last year by "tracking the movements of the planets in relation to the earth". "Whenever the planets are placed in such a way that the Sun comes between Venus and Mercury, like they are now, monsoon becomes deficient. On the other hand, rains are plentiful when the influence of Jupiter is stronger, and the Moon intensifies the effects of such celestial occurrences," he explains.

Mr Ramachandran predicts that the southwest monsoon will revive and become active between September and the first week of November, and that the state is likely to receive good rainfall between January and April next year.

Statistical method of forecasting has its own limitations and that was why errors crept in."

Weathermen are often ridiculed for faulty predictions of rain and shine, but they claim that error is an inherent part of their forecasting methods.

"The forecasting method that the India Meteorological Department uses is completely scientific, as it is based on the laws of physics," said Dr H.R. Hatwar, additional director general of meteorology (research), IMD, Pune, while talking to this newspaper. "It takes into account six parameters of air pressure and ocean activity, and tries to find a stable correlation between them."

Another senior IMD scientist said that the statistical method of forecasting that the department used had limitations and that was why errors crept in. "But it is indeed scientific," he said.

Deccan Chronicle had carried a report on Friday pointing out how nine out of 10 predictions for rainfall from IMD were inaccurate, and had cited a city-based weather scientist's model of forecasting monsoon by `tracking the movement of planets in relation to the earth'.

Though the IMD officials are careful not to dismiss the other methods of weather predictions, they add that such systems are "not part of meteorological science".

Dr Hatwar said the IMD method had a limitation in that it cannot be used to forecast extreme conditions, which is why its monsoon forecast failed in 2002 and 2004. Interestingly, farmers still trust the time-tested methods used by their forefathers. "We know that rain is coming when we see an army of ants migrating with their eggs or a swarm of dragonflies flying at a low level," said farmers' leader, Mr V. K. Ravichandran from Nannilam in the Cauvery delta.

In a bid to placate the farming community the state government on Thursday announced to put on hold the Tamil Nadu State Agricultural Council Act 2009 that was passed in the state Assembly recently.

"To preserve traditional farming and also to respect the sentiments expressed by farmers and media, the ruling DMK has decided to put the Act on hold," chief minister M. Karunanidhi said.

"When the Bill was introduced and passed in the Assembly, neither the alliance members nor the opposition legislators, had objected to it," Mr Karunanidhi said in a statement here.

Besides aiming at regulating agricultural practices and establishing agricultural council, the Act seeks to prepare and certify farm plans, involve private and public sector undertakings and register agriculture practitioners. Presently, there is no law to regularise agriculture in the state and to establish an Agriculture Council.

Meanwhile, CPI (M) secretary denied that the Bill had been passed unanimously in the House and said it was wrong to bring such legislation.