Thirunageswaram enshrines the famous , the snake god – both feared and revered by the people. Starting from this post let me write some interesting but not widely known information on Rahu as found from different sources. 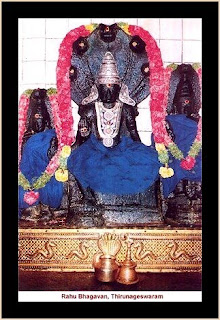 When we say Rahu, it also comes to mean its pair, Ketu.

In most places where they are mentioned, there is reference to Rahu only, that has given rise to the notion that our ancients did not consider Ketu at all.

They are also called as Dampathi.

One does not exist with out the other in the pair.

They are referred to by a singular name which actually denotes the two of the pair.

There are many pairs in Nature.

The 41st and 47th mantras of 10th anuvakam of Soorya Prasnam of Yajur veda deals with this concept.

The earth and sky make a pair. They exist together. One complements the other. When we say earth, it does not exist without a sky. It is understood that earth is visualized with the sky enveloping it.

The day and night make a pair. When we say day, it means both day time and night time. One does not exist without the other. They are like two sides of the same coin.

Similarly Agni and Suryan (sun) form a pair, the Upanishad says so.

Similarly the Ashwini Devathas are a pair.

The very Creation of the worlds from the One Supreme Brahman happened in a pair called Purusha and Prakrithi. The Purusha comes in a pair as male and female

Likewise the nodes are a pair. The ascending node is Rahu. When it is said ‘Rahu’, then it presupposes that there is a descending node also which is called Ketu.

Both these nodes are Asuras who became immortal – the story is known to all.

It is not a tradition in Sanatana dharma to glorify Asuras.

But these two have gained acceptance in the tradition – but not accorded independent status. The Hindu system sees them in the nature of 2 other planets, namely Saturn and Mars.

Rahu must be treated as Saturn (shani) and Ketu as Mars (Kujan).

They were not given independent influences in Ashtakavarga which includes only 7 planets and the lagna. It is only in Yavana system, Rahu is given prominence as an independent identity. The Yavana system is older than what is now articulated as belonging to the Greeks and it is derived from Vedic Thought only. (A detailed article of mine on this will be posted in the blog after December pending publication in a magazine).

In our system we treat Rahu as similar to Saturn.

The gem lorded by Saturn is blue sapphire.

It comes in 3 forms according to astrological texts, namely,

Maha neelam – which is bluish black emitting blue hues around the area where it is kept.

The interesting information comes in the test of these gems.

The idol of Rahu in Rahu-sthalam is given milk abhisheka everyday.

When milk falls over the body of Rahu, it turns blue and becomes white once it leaves the body.

That means the Thirumeni of Rahu Bhagawan in this temple is made of Indra neelam – the blackish gem of blue sapphire which is special for Saturn!

Usually the idols of Gods are made of granite, wood or sandstone. Never are they made of a gem.

The gem used here is that of Saturn.

Perhaps when the worship of the nodes started in the Kaliyuga, the sages had devised the rules as per Saturn (Shanivad Rahu)

There is another connection to Indra neelam or blue sapphire. 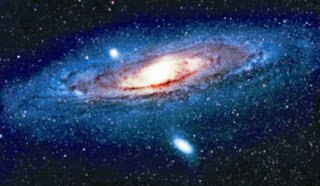 In many places on the praise of Thirumaal or Vishnu,

He is described as blue in colour.

And He is always depicted as reclining on the serpent bed of adhisesha in the .

The body colour of Vishnu must be glowing in blue, radiating a bluish hue around Himself in the . This visualization makes me relate blue sapphire to the Serpent god in Rahu-sthalam.

Adhiseshan too must be of the color of Blue sapphire.

Adhiseshan is the first and foremost in the group of serpents. He holds this earth, says scriptures. He seems to be a Mithunam of Rahu and Ketu.

The actual description could perhaps be that the core of the earth – the iron core - which holds this earth is the Adhiseshan!

The Iron connection reminds of Mars in whose nature Ketu is described.

Rahu is always connected with the crust – the land part – denoted by Varaha avatara also.

The visible part of the earth is lorded by Rahu.

Its pair Ketu holds the earth as Iron core in the inside of the earth.

Any damage to earth will be tackled by Rahu – because Rahu dosha arises predominantly due to the abuse of earth.

When one goes beyond that after getting into the good books of Rahu, the inward journey begins for spiritual growth.

The inner spiritual path is guided by Ketu which must be realized by one within oneself.

Perhaps this explains why there is no separate shrine as Ketu-sthalam!

When one comes out of bad books of Rahu, it automatically ensures re-direction towards Ketu – the lord for Moskha!

From this perspective, worship of the nodes seems to be an easy way for salvation in Kaliyuga.

The more the common man is afraid of the Rahu dosha, the better person he becomes and gets directed towards Inner journey!

Popularly goddess durga devi is associated alot with rahu.Is there any reason?

For every one of the navagrahas, there is a (are) sthalam. In that way, Ketu sthalam is for Ketu. They come under the group in south Tamilnadu. There are navagraha kshethras built by the Pallavas in and around Chennai also which are gaining popularity nowadays for propitiation for all navarahas.But the traditionally recommended kshethras for navagrahas are different.

Traditionally, Kalahasthi is for Ketu! There is also a tradition to propitiate both Rahu and Ketu in Kalahasthi. We have found through many Naadi readings that Rahusthalam (Thirunageswaram) is mostly clubbed with Thirunallar saneeswaran. That is, worship at Thirunageswaram (Rahu)to be followed by worship at Thirunallar(saturn) - highlighting the saying "shanivad Rahu". The temple at Thirunagesawram has thus a special place.


About this Rahusthalam, I have an opinion that it was originally a temple for Adhisesha who was worshiped long long ago, before offering worship to the Lord at Oppiliappan temple. The paripaadal song that I am currently writing also has such a set up in Koodal nagar (madurai). It will be explained in the upcoming posts.

Whenever Vishnu was not in reclining pose on the Adisesha, the ancients had built a separate shrine for Adisesha, near sitting or standing Vishnu. These shrines in course of time had become the temples for nodes or have become part of Shiva temple. The only proof for this that I have come across so far is form Paripaadal.

The posture of Rahusthalam serpent god is similar to adhisesha described in Paripaadal. However we dont know the 'rishi-moolam' and 'nadi moolam' of these shrines.

Durga is the Adhi devatha for Rahu. There are navagraha mantras saying this in yajur veda sookthams.

You can download the e book on navagraha mantras and the meanings form this site:-